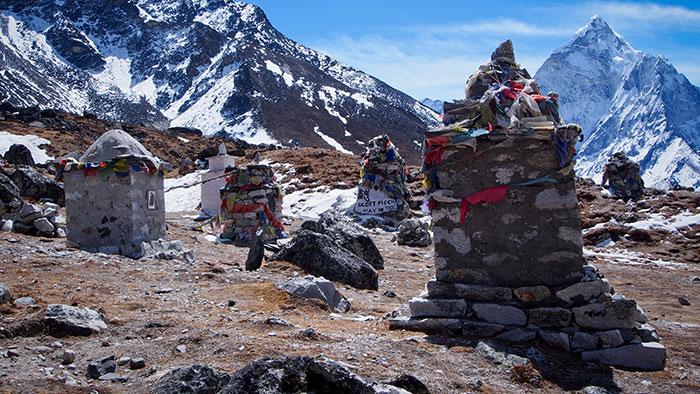 Twice this year, Nepal’s mountaineering and trekking industry has been shaken by a major deadly event in its mountains. Last month, at least forty-three trekkers (including four Canadians) and Nepali guides and porters died as a storm hit the Annapurna range, northwest of Kathmandu. The majority of the bodies were found buried in snow near the Thorung La—a 5,416-metre pass that bisects the two-to-three-week Annapurna Circuit.

The unseasonal weather was caused by Cyclone Hudhud, which made landfall in eastern India days before lashing the Himalayas, as many storms do, with rain and snow. Those who were crossing the pass speak of a white-out blizzard that forced dozens to take refuge in a small stone building near the prayer flags that mark the trek’s highest point. As the storm raged, many felt their only option was to try to descend toward the town of Muktinath on the other side of the pass.

Some people were caught out in the storm; others died in avalanches. The Nepali military rescued hundreds of trekkers from the area in the following days.

In the weeks since, the government of Nepal has called for the installation of high-altitude weather alert stations; for more shelters; for mandatory guides and GPS devices; and for a more robust system of permits and checkpoints—regulations and technologies that will only exacerbate a false sense of security.

The Annapurna Circuit is an easy mountaineering experience. Around 100,000 foreigners trek in the Annapurna Conservation Area each year, three times more than on the more acclaimed route to Everest Base Camp. Both are physical challenges without doubt, hiking for weeks at high altitude, but they are easy nonetheless.

Those who try to summit Everest pay around $60,000 each—a cost that includes a deep support network of guides, porters, cooks, and equipment. But the vast majority of visitors to Nepal who want to see the Himalayas up close do so with little equipment, preparation, or high-altitude experience, for as little as $20 per day. You don’t need a tent, a camp stove, or a sleeping bag; not even food for that matter. Every couple of hours’ walk are teahouses—cozy places to sleep, have a fry-up breakfast, grab a quick bowl of noodles and chai for lunch, and a full dinner of spaghetti, beer, and apple pie—even at 4,450 metres. There is little need for compass or map as the paths are well trodden and clear. And every year, trekkers begin the Annapurna Circuit higher, and therefore acclimatize less, as road construction pushes the trailhead further up the valley.

It is dangerous mountain luxury.

Technology and innovation have always, and will always, be a part of athletics—inventing, designing, and testing new ways to pull the highest points within reach. In the mountains, employing rope, crampons, and ice axes as tools is one thing, but installing aluminium ladders to moderate technical points and ferry ever more paying customers to the peaks is quite another. For many, Everest is a towering example of all that is wrong with mountaineering: technology and services being used not as aids but as crutches.

In the six decades since Tenzing Norgay and Edmund Hillary stood on the roof of the world, countless routes have been made less challenging and peaks more achievable for those who do not belong on the slopes. In May 2012, Shriya Shah-Klorfine, a Canadian with little mountaineering experience, reportedly ignored her Nepali guide’s insistence to descend, slowly continued to Everest’s 8,848-metre summit, and then died after exhausting her oxygen tanks on the way down. But the same factors that propel mountaineers into costly decision-making in the “death zone” appear in similar form along Nepal’s spider web of highly accessible trekking routes.

Modern mountaineers often rely on the ladder, the guide, the GPS device, or the comforts of a well-stocked teahouse—and don’t know what to do when they fail. Even when storms begin to swirl, we feel invincible. We want mountain vistas without needing to know how to read topographical maps or weather patterns, or basic high-altitude rescue techniques. We no longer want to climb, we merely want to ascend. Higher. Faster. Easier.

After a brief closure, the Annapurna Circuit has reopened, with trekkers again slowly trudging up and over the Thorung La—trying to tick off a major Himalayan trek before the autumn season turns too cold. They are sleeping and eating in teahouses, buying souvenirs, and employing guides and porters—bringing hundreds of thousands of dollars into Nepal’s remote communities.

Mountaineering will always be a perilous endeavour. As our bodies acclimatize to thinner air, decision-making becomes fuzzy, but the goal becomes clear. Summit fever is a real force of nature, as deadly as any blizzard or avalanche or falling serac. And while the Thorung La may not be a true peak, it is a summit nonetheless.