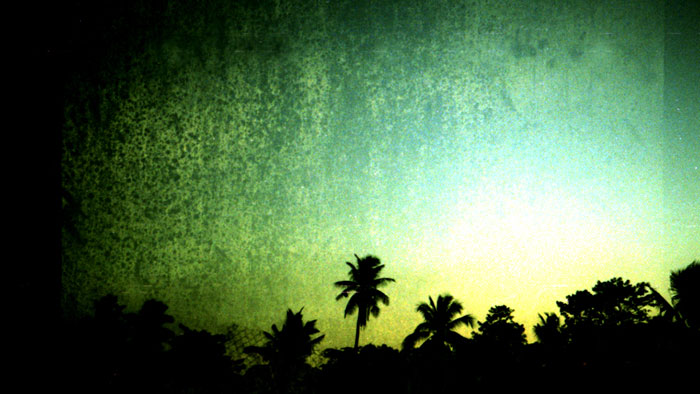 This is from a story I “wrote” in 1998, when I was sixteen. I say “wrote” because I interpolated a chapter from Tim O’Brien’s Going After Cacciato, changing the names and substituting most of the verbs, adjectives, and adverbs with synonyms. Instead of being a story about the Vietnam War I made it a story about melancholy goblins.

Small-Striker Gil’han Mok was pretending. He was pretending he was not in the war, pretending he had not watched Sirad Bol collapse earlier that afternoon. He was pretending that he was a cub again, collecting skri’ stones by the river-bed, building hekruney with his father. Laughing. In the twilight, with his eyes pinched shut and long hands squeezed into fists, he pretended. Gil’han pretended that when he blinked open his eyes, his father would be there by the hekrun. His father would draw stories in the soil, and Gil’han would read them in a low hiss, his voice like the brushing of ferns. In the firelight, the goblin would see the journeys of Morak and Kor, the battle of the Hak, and he would not be in a war, and Sirad Bol Ne would not have collapsed, his heart unbeating, that afternoon. Gil’han pretended he was not a warrior.

Gil’han’s eyes fluttered open. There was a dark, scant shape beside him.

Gil’han struggled to his feet, grasping the spiny shoulder of the shape beside him. He straightened, tossed his head, and nodded. “A—all right.”

“Were you dozing? Korech tell me you weren’t dozing.”

“No.” He could not make out the face of the goblin beside him. With tingling, sticky hands, he touched the dagger-hilt at his side.

“You better not have been dozing. Filnik would kill you if you were dozing.”

The moon came out. It was a pale, round face. Gil’han thought he could see strange, elven eyes, and slender, elven lips. He thought about how big the moon’s arrows would be.

The amulet that hung around Gil’han’s neck stung his chest whenever he walked. It swung and slapped, leaving a pale, black bruise. When they reached the sea, Gil’han would clean the dust out of it, and tighten it. He would also clean his dagger, wiping the sticky borra juice from it, or maybe blood.

At the sea, Gil’han would learn the names of the other soldiers. He would slap Filnik on the shoulder, and laugh, and they would visit each other on the summer pilgrimages. He would become friends with all the other fighters, and they would still be friends in fifty years, long after they had won the war.

In the morning the long string of warriors followed the winding trail, their different amulets twinkling in the starlight. Gil’han followed doggedly, automatically, like a sleepwalker. His hands swung at his sides, synchronizing with the goblins ahead. The goblins whose names he did not yet know.

Sean Michaels (@stgramophone) won the 2014 Scotiabank Giller Prize for his debut novel, Us Conductors. He writes about music for Believer magazine, the Guardian, and his Montreal blog, Said the Gramophone.