Confronting Our National Demons | The Walrus
Skip to content 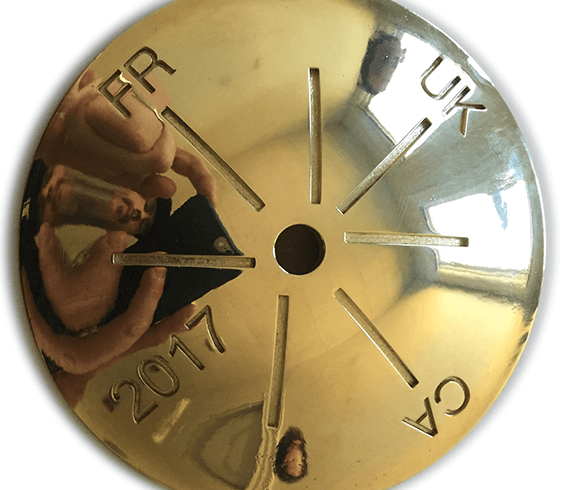 On a sunny day in Venice, an unlikely sound carries  from the east side of the floating Italian city. Blasting from a set of speakers inside the sprawling Venetian Giardini, “Burn Your Village to the Ground,” a song by Indigenous Canadian artists A Tribe Called Red, fills the air. “We’re taking the land which is rightfully ours,” they proclaim. “Years from now, my people will be forced to live in mobile homes and reservations; your people will wear cardigans and drink high balls.”

The song tells the story of a rebellious, agitated Canada, previously invisible to outsiders. It’s the perfect soundtrack to Extraction, Canada’s official entry to the 2016 Venice Biennale of Architecture and a physical embodiment of the nation’s burgeoning anti-monarchy, pro-First Nations sentiment. This year, Canada has an opinion—a fierce, abrasive one. It’s a loud, angry outside voice, and the Biennale is its political megaphone.

Often referred to as the “Olympics of architecture,” the Venice Biennale is the industry’s foremost event, exhibition, and idea exchange, held in the city’s only green space for six months every two years. Hosted in a park built by Napoleon and visited by the likes of Mussolini and Adolf Hitler, the Biennale is an inherently political space, and is now home to the pavilions of all founding member nations of the Biennale—a veritable who’s who of colonial power.

Despite the history of the venue, overt political commentaries have become scarce at the Biennale: the starchitect-studded event has a long-standing reputation for being disconnected from reality. But under the direction of socialist Chilean architect Alejandro Aravena, the 2016 Biennale has made a serious call to action, and Canada has responded.

Buried strategically at the physical nexus of Canada’s historical tensions–nearly blocking access to the pavilions of France and the United Kingdom–the 2016 Canada pavilion occupies a unique and political space. Thrust into the venue’s public area—a first for Canada and for the Biennale—a white medallion embossed with a topographical map of the world announces the modest arrival of this year’s most unorthodox national pavilion.

Much smaller than its booming message, the pavilion is no more than three metres wide and a centimetre tall. A comment on Canada’s global dominance in the exploitation of natural resources, Extraction is sunken below-grade and obtrusively placed at the centre of a gathering space. Unlike its sixty-one neighbouring national pavilions, guests cannot walk inside Canada’s pavilion: it’s closed this year for renovations. Instead, visitors are invited one at a time to kneel atop the map, lean into a golden oculus, and watch an 800 second video featuring 800 curated images designed to explain Canada’s history of resource extraction. By allowing only one viewer at a time, the curators hope to “elicit a deeper discourse on the complex ecologies and vast geopolitics of resource extraction.” In a nod to Canada’s First Nations, the oculus (or survey stake, in geological terms) is inscribed with the words summa virtus terra est: “the greatest power is land.”

Curated by Pierre Bélanger, Landscape Architect and founder of OPSYS (a nonprofit landscape urbanism consultancy), and commissioner Catherine Crowston, Chief Curator at the Art Gallery of Alberta, Extraction does not treat the pavilion as a physical space, but instead explores Canada’s intangible role as the largest resource-extraction economy in the world. As Bélanger notes, through a complex set of laws built in favour of mining corporations, more than 50 percent of all global mining and prospecting companies have their headquarters in Canada. “Seen geographically and understood politically,” says Bélanger, “the process of extraction is a profound and deep-rooted ideology, exercised through forceful penetration, both overtly and covertly.”

The pavilion tells the story of extraction in Canada, beginning 800 years ago with the Magna Carta. Established by King John of England in 1215, it divided surface and mineral rights for land, and placed the ownership of valuable mineral commodities firmly in the hands of the Crown—a property grab with lasting consequences. “Our criticism is focused on the ideologies in between the lines of the law and buried deep in the histories that affects lands and territories across the country for which most Canadians are unaware,” says Bélanger. “To a certain extent, the project is holding up a mirror to the country. Its image is very different than reality on the ground.”

In a nation where 95 percent of the land is legally owned by the Crown but historically occupied by First Nations people, Extraction is a poignant response to one of Canada’s most pressing dialogues. Highlighting a dichotomy all too familiar to Canadians (but unbeknownst to most Europeans), Extraction explores the brutal territorial relations between Indigenous people and the federal government of Canada, delving into a centuries-long history of natural-resource harvesting in exchange for meagre tax benefits and reduced land rights for First Nations people. Citing conversations with members of the Athabasca Chipewyan First Nation, Bélanger explains: “It is the struggle and fight of First Nations’ and Indigenous people resisting extraction for the past two to three centuries that has led to this project.”

In 2016, on the eve of Canada’s 150th Anniversary of Confederation, Bélanger argues that the Crown’s role in the ownership of the Canadian landscape has extended beyond the extraction of minerals, creating a realm of power that exceeds the reasonable amount wielded by a national government. At its inauguration in Venice, held during Canada’s Victoria Day weekend, Bélanger ventured that Canada’s 149th year as a nation might be its last as a constitutional monarchy, to which he received mixed reactions from the largely Canadian crowd.

It is worth noting that Extraction, as with all Canadian Biennale entries, receives a significant portion of its funding from the the Government of Canada. Despite its rejection of the monarchy, Extractionhas forged ahead with its state-funded sponsorship. On the subject, Bélanger says, “the Canada Council for the Arts chose difficult, contested and charged subject matter to represent in Venice, which is a strong indication of the oceanic turn that the Council is taking towards matters of social and environmental justice. This is a level cultural leadership and curatorial audacity that is unprecedented.” Echoing Bélanger’s sentiment during his speech on behalf of the Government of Canada at the pavilion’s inauguration in Venice, Canadian Ambassador to Italy Peter McGovern added: “Under new federal leadership, Canada has a renewed interest in the arts, and in the Venice Biennale.”

Although its subject matter is dense, Extraction ultimately tells the story of a Canada that has grown restless under the burdens of monarchical and capitalist influence. A Canada that has begun to protest the exploitation of its resources and the mistreatment of its First Nations people. A Canada, in the eyes of Bélanger, that has legislated away the sanctity of the land and its historical owners in favour of commercial gain.

The collective message of Extraction is a complex call to action: Canadians should no longer tolerate the continued profit-and-politics-driven extraction of resources nationwide. “The exhibition at the Venice Biennale of Architecture is the beginning of a conversation abroad first, then at home second,” says Bélanger.

For many Canadians, a mainstream group with a distinct lack of interest in confrontation, Extraction is decidedly uncomfortable. But it evokes a jarring, critical, and ultimately necessary response to an issue that is, at its heart, a political commentary on the state of the relationship between the Crown and Canada’s First Nations people. When faced with our national demons, we are forced into a moment of unease and introspection, challenging us to consider our landscape, our resources, and our ancestors. Bélanger’s version of our history may be exactly what Canada needs.

Finn MacLeod is an architecture writer and historian. He currently works for Skidmore, Owings & Merrill in Chicago.