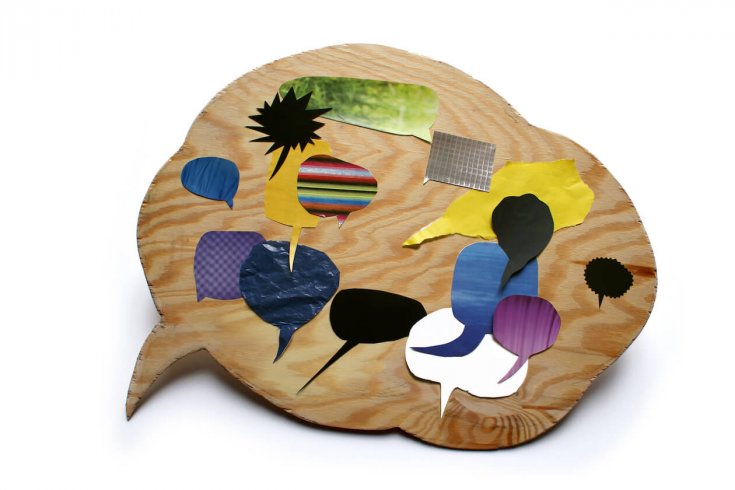 A person is about to be fired. They have been asked into a meeting room and left to prepare their thoughts while their manager pours some water. The conversation begins with a speech on the state of the company. The words go-forward and right-sized are joined by other hyphenates. The fired person breaks the soliloquy and asks, “Are you firing me?”

The manager nods. “Your position has been made redundant,” they say.

The frustration of meetings like this is often expressed as a frustration with language. Reality should not be occluded by jargon. In her penultimate piece for the Financial Times before retiring to start a new career in education, columnist Lucy Kellaway plays to this frustration. Corporate English is rivalled only by politics and academia as a source of derision by defenders of meaningful speech, among whom Kellaway is king.

I work for a legal technology company. My job title is obtuse, but I call myself a Professional Talker. I explain things and help people see why they are valuable. And if I do it well, people have easier and more effective work lives and I get a bonus, and everyone is happy.

When not at the office, I write and publish poems. It is a dual existence known to all poets not blessed by wealth or unemployability. My poetry fixation informs a minority opinion on the topic of the corporate lexicon. At worst, I think corporate English bears all the same bruises and misdirection as the rest of contemporary speech, no better or worse. At best I believe it holds its own as a well of figurative thought, wielding metaphor more effectively than most.

I don’t have a direct counter to Kellaway’s essay or its cousins, and my defence here is only partial. Corporate English has brought us both good and bad buzzwords, but there is an Ars Poetica in understanding what your favourites have in common. I fall for any that resituate a known term, using it to model a problem via metaphor. I love that a busy day has little bandwidth. That an eager client is a champion. Ideas that leap the business-consumer barrier to become mainstream cliché—virality, leverage, unpacking—all have homes in my vocabulary.

Another set of favourites are things like rightshoring or folksonomy. These are expressions less notable for their roots in metaphor than for their unembarrassed assembly. Prefix on suffix on compound word. My favourite English word, for example, is sticktoitiveness. A simple, if figurative, phrase assigned two hefty suffixes. “Stick to it”-ive-ness. These are words that no modern linguist, asked to create a language of peak efficiency and grace, would invent, but that came from the need to express one idea through another, even when an incumbent word existed. Why say thought when you could say ideation? Leave Orwell out of it.

When we weigh the value of new words, we ask about their synonyms. Take work, for example. Synonyms of the word include non-controversial ones like occupation and job, but also avocation. Avocation and job imply differences in term and investment. So much of our discomfort with business English comes from its exploitation of this fuzzy space of near-synonyms. Holisticness, in management and elsewhere, keeps much of its most common synonym: wholeness, but not all, adding a spiritual element and a sense of dynamism. Those who’d ask to replace it in our speech are asking for less nuance in the name of greater clarity. But it’s easy to be clear until you mean something complicated. Just ask a poet.

Even words we use to describe corporate vocabularies cheat the idea of the synonym. Jargon and lingo are synonyms, aren’t they? But we use the former when we wish to denigrate something and the latter when we don’t: jargon is insular, but lingo has whimsy.

Sometimes Kellaway’s targets deserve it. Starbucks CEO Howard Schultz used the word coffee-forward in a press release and I’m not going to defend that or even guess what it means. Nor I don’t want to ignore the real-world consequences of the worst of business English. Its need to overemphasize stability can be dangerous. A platform sounds sturdier than the bit of code it really is. Finance is the worst for this. Asset-backed securities are financial instruments that contain, thanks to the hyphen, three assurances of stability in only two words, and so became attractive to investors who went bankrupt when the mortgage crisis unmasked them.

The worst words share some of the qualities that define my favourite terms—they are imported and repurposed—but without the grounding in the common that makes new ideas recognizable in old ones. Take synergy. Synergy is a sneeze. It is the go-to meaningless work word. Do you know what synergy means? It comes from the Greek for cooperation. From there it went to medicine, and referred to times when different body parts worked in harmony. When you hear the word synergy, you can roll both eyes simultaneously due to the synergistic effort of your orbital muscles.

The problem with synergy is that very few people are doctors. And so the grounding that’s required before importing it never happened. The word arrived as an alien, and most people first learned it in a business context. Learning a business word first in a business context is the worst possible introduction, and synergy, not an inherently bad word, has been lost to us because of it.

Lucy Kellaway is an icon of corporate writing and I am a poet with a day job, but I have to speak up for the best of these words. The ones that arrive in the corporate environment still bearing some faint stamp of their old lives. These abstracted spirits. These ad hocs. These gleeful bastardizations that reframe the petty avarice of commerce, turning barter into exchange and estimates into ballparks, these workaday replacements that give historical weight to the exchange of money. Are they not poetry? Is this not what we want of language, to perform the tricks of metaphor? To grow one idea from another? To call us from the world beyond our greed and boredom? To say that code is architecture. That loans float. That a company has solvency. That a website is a platform.

Business is contingent on people with different experiences finding ways to converse. Real estate companies borrow language from architects. Tech companies borrow it from coders. Work can be a force for personal good if it makes you visit new worlds. And whenever these worlds come with new lexicons, we arrive at the laboratory of metaphor. The best of corporate english records this.

Criticisms of corporate jargon are criticisms of How We Speak Now, of the vocabulary of the working class. White-collar workers became a majority among the developed world’s workforce in the 1970s, and our current century has seen growth in phenomena—call centres, portfolio careers, temping—that make offices more and more the setting of working-class labour. How far are we from hearing the word synergy as a class-capturer, a shibboleth for the lower-middle drone?

I work in an office. And if I have to work, I’d like to work in a moving language—a moody, testing, even deceptive one. The use of redundant in the anecdote at the top of this essay isn’t meant to be good. It is blunt and cold and likely imprecise. But its appearance is a record of how we speak and think. What are we expressing when we revolt against it? Are we reminding ourselves to be afraid of capitalism? Well, we should be.

I side with both Leonard Cohen and Lucy Kellaway in believing there are no bad or dirty words. Except “utilize.” Never say “utilize.” It just means “use.”

Jacob McArthur Mooney’s latest is Don’t Be Interesting. He works, under a different name, for Firmex, a virtual data room provider.