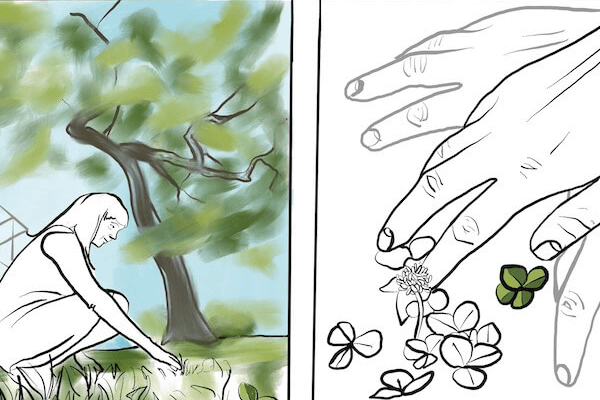 When I was in the third grade, we had a scavenger hunt at school. We gathered up chalk, pencils, stones and poorly-hidden tchotchkes, rapidly filling our checklists. It was a very close race. I was out of breath when I reached the clover patch in search of the last, most hard-to-find item: a four-leaf clover.

I was pretty sure that I was going to win. I had a trump card. The thing is, I have always been able to find four-leaf clovers, for as long as I can remember. I just see them.

I spent my childhood collecting and pressing four-leaf clovers into books at my mother’s house. I started with big, cloth- and leather-bound books. Joyce’s Ulysses, the complete works of Shakespeare, my great-grandmother’s copy of Les Miserables. When I ran out of romantically-bound volumes I began to slip my treasures into anything I could find: well-thumbed speculative fiction paperbacks, cookbooks. The same is true in my house today. Shake a book and a papery treasure just might fall into your hand.

A few years ago, in Nova Scotia, my husband and I pulled off the road for a picnic. I looked down and the ground was thick with clover. With every glance, I saw another. Some shoots had four, five or even six leaves. I lined them up on the picnic table to admire as my husband, having never yet found one four-leaf clover, looked on with awe. It felt so simple. The differences in their shape popped out, breaking the pretty pattern of the conventional clovers with their three perfect leaves.

Last summer, while waiting for an airport shuttle in Munich, I found a tiny four-leaf clover in a traffic circle and tucked it into my passport. On the way home, my husband and I were upgraded to business class. Friends attributed our good luck to the clover. I think we make our own luck. I love finding the clovers, but I think it’s more likely that we were upgraded because we suffered a flight cancellation that left us stranded in two cities on as many continents on subsequent nights, and a kind customer service rep took pity on us.

There is widespread disagreement about whether the luck lies in the finding or in the possession of a clover. Some people believe that the luck is lost if the four-leaf clover is even shown to somebody else, while others believe the luck doubles if it is given away. I believe that positivity is compounded by sharing. I feel lucky to find the clovers with such regularity, but I don’t really think they influence my luck or my life in a tangible way any more than it does to share anything a little special—that momentary closeness between you and a friend or a stranger, as you all lean in to wonder at a rare find.

What is luck, anyway? Does it mean you can’t take credit for the things that happen to you? Should I have kept all the clovers I found instead of giving them away?

I believe that there is casual magic in everyday acts. I think it’s lucky simply to have seen, to know what it is to seek out and love a genetically deformed clover—to know how to treasure difference.

What is it about clovers that fill us with so much wonder? Why are they special to us? It’s not just that they’re rare. I mean, I find them all the time, but I’m still compelled to look for them. Every time I see a patch of clover, I’m pulled toward it, the tug of possibility. I feel a compulsion to search that cannot be satisfied until I hold a four-leaf clover in my hands. I get locked on. It’s a sort of mania.

And how rare are they, anyway? I had always thought that, being a simple genetic anomaly, four-leafed clovers would be fairly common. Think about how many mutations are found in nature. I have since learned that they are both more and less common than I thought. Apparently, one in 10,000 clovers has four leaves. It could be the result of a recessive gene, a somatic mutation, or the influence of the environment. It could be any combination of these influences, but isn’t this where science meets magic?

And even though I find them all the time, I’m not actually exceptional in this skill. The Guinness Book of World Records holder, Edward Martin Sr. from Cooper Landing, Alaska, had found 111,060 four-leaf clovers when he took the record in 2007. He self-reported that the number exceeded 160,000 in 2008.

It’s the finding I love, anyway, not the collecting. I’m happiest to find “lucky” clovers and give them away. I give them to mothers in parks, who show them to their wide-eyed kids. I gave one to the man at my corner store, where it’s still hanging above the register. I hand them to friends who slip them between the business cards in their wallets, for safekeeping.

People ask how I do it. I love clover. The sweet smell, the common variant with its cute trio of leaves, so I spend more time looking at them than most people. I expect that’s the first reason I find so many. I have developed a habit of gently dragging my fingers or toes across a patch, momentarily separating the individuals, which brings irregularities into focus. I think focus is a part of finding them, not a hardening, but a softening of focus. I allow my eyes to relax and the unlike shapes pop out.

The other reason is artful. Do you remember those posters made up of thick dots in the ’80s? If you looked too hard, all you’d ever see was the pattern. But if you hung them on your wall, and let your eyes slip out of focus, scenes would appear, dinosaurs, landscapes, butterflies, fractals—a trick of the eye. So long as you didn’t try too hard to see, the solution would be clear as day, but the instant you focused your eyes, the image would disappear. Infuriating to those who couldn’t see and triumphant for those who could.

It’s the same with four-leaf clovers. If you try too hard, you will only ever see the patch. Instead, slip into a lazy, soft-focus, summer state of mind. Casually drift your hand across a thick patch, letting the clover reveal themselves one by one. Appreciate the ones that have only three leaves. Admire their symmetry. Common things are beautiful, too. And out of patient appreciation, a four-leaf clover may show itself to you. Just like that.

That day in the third grade, I dove into the clover patch, skimming the surface with my hands to separate the tangled leaves, softening my eyes to look for irregularities. It only took moments for a four-leafed clover to fall into my fingers. Just like that. I don’t remember the prize, but I re-member lifting that clover up in triumph and joy. I remember the looks of wonder it inspired in my classmates.

Whatever little toy I won that day, my real prize was the gateway the simple act of looking for clovers opened for me into a lifetime of joy derived from looking closely. The magic of nature coming up as it pleases.