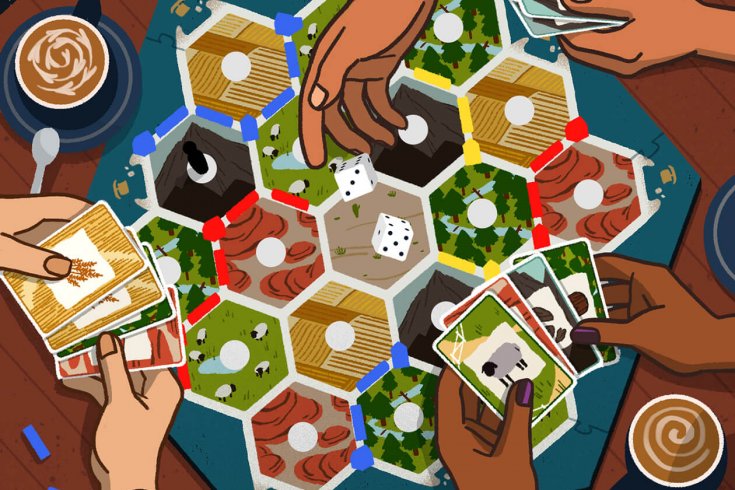 “You must have the best job in the world,” people often tell me. It’s hard to argue with them, since my job is to help people have a good time playing board games. I work at Snakes and Lattes, which opened in Toronto in 2010, making it the first board-game café in North America. I help our guests choose games that suit their tastes, and I teach them the rules so that they never have to struggle through a rulebook. For someone who loves games as much as I do, it’s a great life.

I’ve been doing it for more than five years, and I can teach players how to tackle about 500 games. I’ve helped people of all ages and backgrounds and moods, from nervous couples on a first date to boisterous groups of twenty. Some of our patrons are seasoned competitors who have no problem coming to grips with rich, immersive games that create miniature worlds for the players to explore. But most are new to the hobby, and with them, I take special care. I know their experience with me could make them lifelong game players—or turn them off games entirely.

If you’re performing surgery or flying an aircraft, mistakes can kill. But not everything is life or death.

To some, playing board games may seem like a simple hobby, but my position at Snakes and Lattes has taught me a great deal about human nature and how our society deals with failure. That’s because in the world of games, failure is necessary for success.

Allow me to explain. I’m going to teach you to play Telestrations. It’s a cross between Pictionary and the telephone game. Each player gets a little plastic booklet, a dry-erase marker, and a secret word or phrase. You write your secret word on the cover of your booklet, then open it to page one and quickly draw a picture of your secret word.

After the booklets have been passed all the way around and everyone once again has their original booklet, it’s time for show and tell. You announce your secret word and hold up your nigh-unrecognizable sketch from page one for all to see. Then you flip to page two and show everyone what the person on your left thought you had drawn. Then you turn to page three and show everyone the next player’s picture of that, and then to page four to show them what the next player guessed that was, and so on.

Usually, by the time it gets back around to you, all connection to your original word has been completely lost. And just as in the telephone game, that’s the point. It’s a cavalcade of ludicrous failures. It’s also one of the easiest games to recommend to a group of players new to the tabletop.

But Telestrations isn’t guaranteed to entertain. There are two ways it can fall flat. The first involves too much success. If all the players are proficient artists, the game is hardly worth playing. You might start with the word cheese and draw a nice little sketch of a piece of cheese, then pass it on to the next player, who correctly identifies it as cheese and passes it on to the next player, who also draws an easily identifiable piece of cheese. By the time it gets back around to you, nothing has changed. Everyone has succeeded. And that’s boring. (Some ingenious players have instituted a house rule that if you’re good at drawing, you must use your non-dominant hand. It’s a rule I heartily recommend.)

The second way this game can go wrong results from too little effort. A player who is intimidated or anxious might want to avoid embarrassment by refusing even to try. They draw shapeless scribbles to avoid failing at drawing, or write random words to avoid failing at guessing. Again, boring.

For Telestrations to deliver on its premise, it needs players who will try their best to succeed, and fail anyway. Because that’s where the fun comes from—the joyous, flailing panic inspired by your own earnest but incompetent art and guesses, and the gentle schadenfreude of watching your friends fail, too.

While it might not be obvious at first, the same principle also applies to nearly all other games. If you demand perfection, there’s no room for fun. But if you refuse to invest enough of your pride in making an effort to win, you kill the tension, and the fun dies with it.

The will to succeed and the freedom to fail aren’t just prerequisites for playfulness: they’re also essential to creativity. We’ve seen the TED Talks and heard Kenneth Robinson’s well-known dictum “If you’re not prepared to be wrong, you’ll never come up with anything original.” We pay lip service to this truth in our parental platitudes, our motivational posters, and our management seminars.

But the reality we experience in our schools and workplaces teaches us the opposite lesson. Take an unusual approach to problem solving on an exam, and you risk a low grade. A bold but unsuccessful initiative at work can cost you your job. So of course we’re terrified of failing, even when it comes to our entertainment. The most popular electronic games—from Candy Crush Saga to hard-core titles such as Dark Souls—have something very revealing in common: the player cannot lose the game. They can keep playing until they prevail.

But on the tabletop, it’s different. Every night at work, I see at least one customer approach our huge library of games, unsure of what to choose. I chat briefly with them to assess their tastes, then recommend one of the hundreds of marvellous new games that have been published during this century’s board-game renaissance. Something attractive and accessible but not too complicated.

And then it happens. They hunch their shoulders, glance nervously about, and chuckle uncomfortably. They’re afraid to fail, afraid to look ridiculous in front of their friends. So instead of setting out to explore new worlds, they surrender to fear and reach for the dull, familiar safety of Monopoly.

Failure can, of course, have serious consequences. If you’re performing surgery or flying an aircraft, mistakes can kill. But not everything is life or death. You can’t start a new relationship, embark on a new career, or create new art without occasionally falling on your face.

Games are powerful because they create a space that exists outside our normal experience. Within that magic circle of play, failing is not only okay—it’s essential.

Joan Moriarity is an instructor at Snakes and Lattes, a board-game café in Toronto.
Mariah Llanes