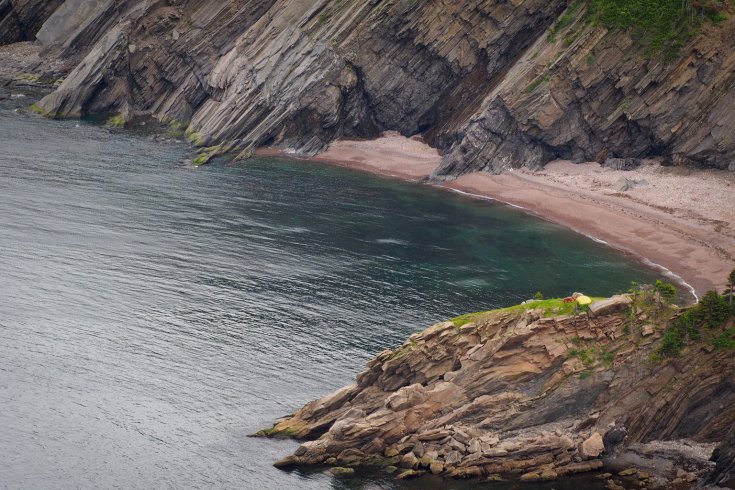 On Cape Breton, all roads lead to Meat Cove—you just have to keep going north. Fork off the Cabot Trail, pass the crescent of sand where the drive’s namesake allegedly landed his ship, and keep on when the asphalt turns to dirt.

Near the end of the road, there’s a campground. “I’ll give you the tour,” says the caretaker in a cordial islander accent. It’s a couple weeks before the tourist season starts, when schools let out for the summer, so there’s time to show me around. Mid-June is a quiet time in the most northerly community in Nova Scotia. Only a single motorhome is parked on a central hillock with a view of the bay: fissile shale cliffs appear either sliding into or erupting from the water, a beach to the east, nothing but ocean and big sky to the north. There’s humility to the landscape up here, a kind of gradual and modest nature.

“You can have any spot you like,” he says, taking me down the undulating grassy slopes, pitching this way and that before ending abruptly at the edge of the cliff. Rumour has the cove named by fishermen who landed here to hunt and slaughter moose. Like much on the island, Meat Cove is also known by a Gaelic name: Camus na Feòla. “These are the flattest sites, great location, a bit less exposed, but you have to park your car at the top. It’s too steep to drive down.”

He shows me the other sites, taking time to detail the pros and cons of each cluster. Flatness. Protection from the wind. Proximity to the water tap and bathrooms. Then he stops, turning to face me with arms crossed. “Now,” he says, “how big is your tent?” He raises one hand to rub a few days worth of stubble on his chin, narrowing his eyes.

He makes a deep hmm sound. “Do you drink?”

“Sometimes, but not on this trip.”

A pause. “You’re not a wanderer at night, are you?”

He thinks about this for a few seconds. The wind gusts sharply; he seems to take particular notice. “And you’re just one person?”

Another, longer hmmmm. “Let me show you campsite eleven.” He speaks the words like he is listing rooms at the Bates Motel. “We usually don’t give it to single people,” he says. “It’s nice to have a buddy just in case something goes wrong.”

He leads me down the slope toward the cliff, past signs cautioning to stay two metres back from the edge, and along a narrow ridge not wider than my two feet together. On either side: twenty-metre drops to rocks and waves. Partially hidden from view, behind a copse of stunted spruce trees—bending away from the water as if permanently wincing from exposure—lay campsite eleven. A small patch of grass, a picnic table, a fire pit—all precariously perched on a narrow spur of rock jutting out into the cove like an arrowhead.

The caretaker looks at me, and raises an eyebrow. I’ll take it, I nod. He nods in agreement, and pats me on the shoulder. 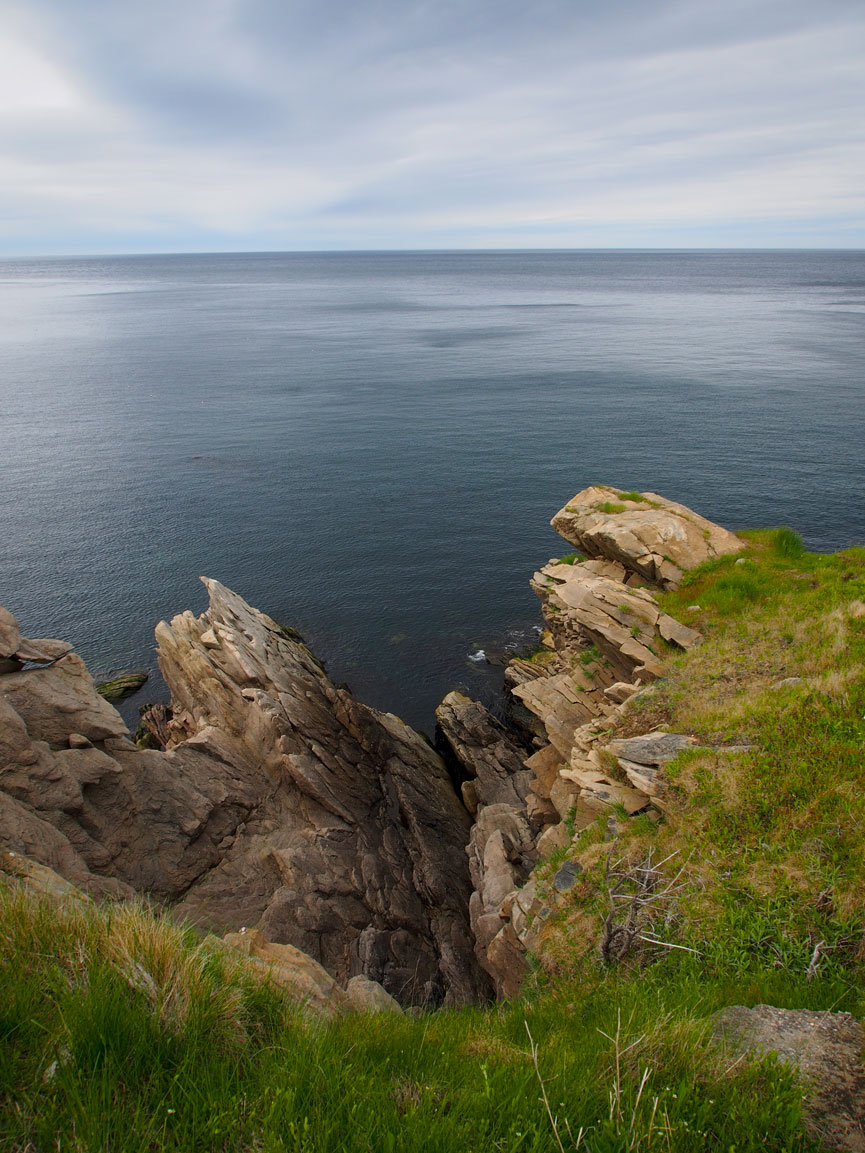 I pitch my tent, staking it down well into the earth in case the wind kicks up, then hike to a viewpoint west of the campground. It’s a short slog through the pines and up to a ridge. At the top I get a sense of just how exposed my little tent is: a tiny yellow speck that looks like a soft breeze might send over any one of the three edges. The grass ripples gently in the wind. I sit for hours looking out to sea, watching dark clouds amass and billow toward me. Newfoundland lies somewhere out there.

It’s only 5 p.m. when I crawl into my tent, but I pass out with a book splayed on my chest. An hour later I wake to rain pattering on the fly of my tent, gusts nipping at the nylon. I unzip the door and peek out to check the conditions. The sky is painted a new colour, Ominous Grey, with steady rain and fog filling the cove. It’s hard to make out the cliffs anymore. The water is choppy, tides churning; I can hear it crashing into the rocks below. For a moment, through tired eyes, the dark waves look like breaching whales—dozens of them, a whole pod, arcing into the bay. The maritime mirage fades into the haze, and I worm back into my sleeping bag.

Around midnight, the weather turns violent. I check the tent pegs every hour, as the wind keeps tugging them out of the soft ground. There’s no respite from the gusts, and I’m forced to brace the poles with my arms to keep the structure from collapsing in on me. But it’s a good tent, and it holds.

At 6 a.m., I lie on my sleeping bag fully clothed, packed up and ready to make a run for my rental car that’s parked back up on the grassy slope. There’s a break in the wind and I take my chance. Without the weight of my body, the wind lashes the tent viciously and I nearly lose it into the maelstrom below. In a few minutes, I’m tiptoeing back over the tightrope ridge to my car, arms full of sodden gear.

I drive back to the Cabot Trail, stopping a few times for short hikes through the morning, then pull into the crowded parking lot at the popular Skyline trailhead. I’m changing my shirt, when there’s a voice behind me.

“Were you the one at Meat Cove yesterday?”

He’s a big man, wearing a duck hunter’s camouflage shirt and holding the leash of his dog.

“We were in the motorhome.”

He and his wife live in Florida, retired, and spend a lot of time on the road. They drive to Alaska each year, he tells me, taking a different route across the continent every time. This summer they’re exploring Atlantic Canada.

“We were a bit worried about you out there last night. Kept checking to make sure your tent was still there,” he says with a chuckle. “But hey, did you see the whales?”