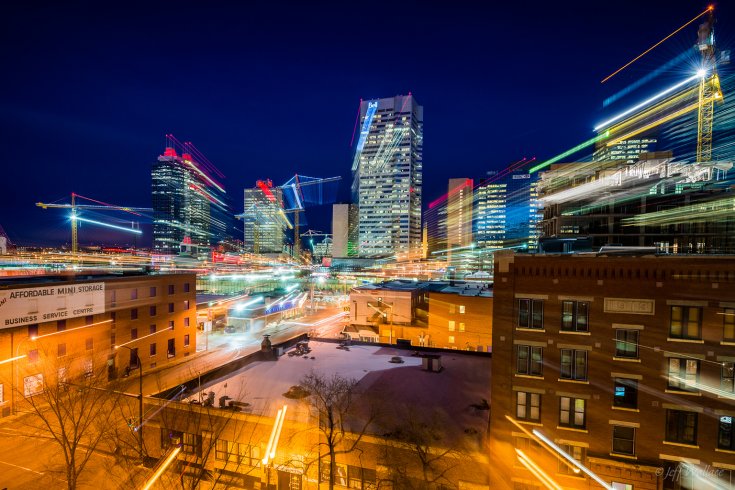 On one side of the street, a red swastika flag fills the window of a rundown apartment. On the other, the hulking skeleton of the Edmonton Oilers’ future home, Rogers Place. Down the block at the last remaining parking lot in sight, another red flag, this one bearing a Mohawk warrior and sunburst, drapes over the opening of a blanket fort propped up by a lean tree and a fence.

Twenty months ago, the northern fringe of Edmonton’s city centre was a quilt of parking lots. Now all but this one is staked with cranes casting (literal) shadows over a drop-in centre’s morning queue and an army of workers showing up to build a $2.5-billion downtown revitalization project, including the construction of a new hockey arena.

Welcome to the Ice District, named not because of the widespread use of crystal meth—or “ice,” as it’s known to some—but because a billionaire says so. That billionaire is Daryl Katz, owner of the Oilers, and probably the most powerful person in the Alberta capital after Premier Rachel Notley and (maybe) Mayor Don Iveson, who as a city councillor twice voted against unzipping the public purse for the new arena. He eventually caved on the $600-million price tag, then won the race for mayor in a landslide five months later.

Until Monday morning, the redevelopment area was known blandly as the Edmonton Arena District, both in the Katz Group’s branding and in municipal documents. Some called it the Entertainment and Arena District to account for the casino, hotel, and Cineplex. (It will also feature a drug store: Among the Katz Group’s holdings is the Rexall pharmacy chain.) Then a video, opening with Zorro’s weirdo cousin pulverizing a block of ice, revealed that the hockey owner had changed his mind, and now would like everyone to call it the Ice District instead.

Sorry. That’s “Ice District.” No “the.” The brand guide is clear on this point. Why? Journalist Max Fawcett tweeted a plausible theory:

Was the definite article dropped from Ice District so corporate brands could be attached to the front? Smirnoff Ice District, anyone? #yeg

As for the question of why a city would have its taxpayers financially backstop a successful sports franchise, then relinquish ticket revenues and naming rights to the owner, the answer is: It happens all the time in professional sports. Indeed, HBO comedian John Oliver just did nineteen minutes on this phenomenon last Sunday. Replace the Milwaukee Bucks, Miami Marlins, and Detroit Red Wings in his segment with Edmonton Oilers, and you have a play-by-play of the Katz deal, right down to the owner threatening to move the team to another city. (The only part of the Edmonton narrative that wasn’t in the usual playbook was Katz’s full-page newspaper-ad apology for flirting a little too aggressively with Seattle back in 2012.)

Finding people to say nasty things about Katz is easy: The once-great Oilers have been the league’s worst performer since his ownership tenure began in 2008. But, for a city in search of a hero since Wayne Gretzky’s 1988 trade, Katz’s plan was seductive. Many hope that the high-value real-estate cluster anchored by the arena will inject some life into the struggling downtown. And so the municipal government created some clever tax-and-levy schemes to help Katz build it. A real Prairie barn raiser.

Where to build? No location was more obvious than the twenty-five-acre blight on the north edge of downtown. It’s long been a hard border separating the city’s government and financial towers from social services and the homeless clientele who rely on them. More attention was paid to limited parking than the effects of gentrification. And so once the proposal had traction, skeezy buildings to the south (including my converted warehouse office, with its third-floor view of the arena’s oil-drop-shaped contours) were colonized by arcade bars and Food Network–approved restaurants. 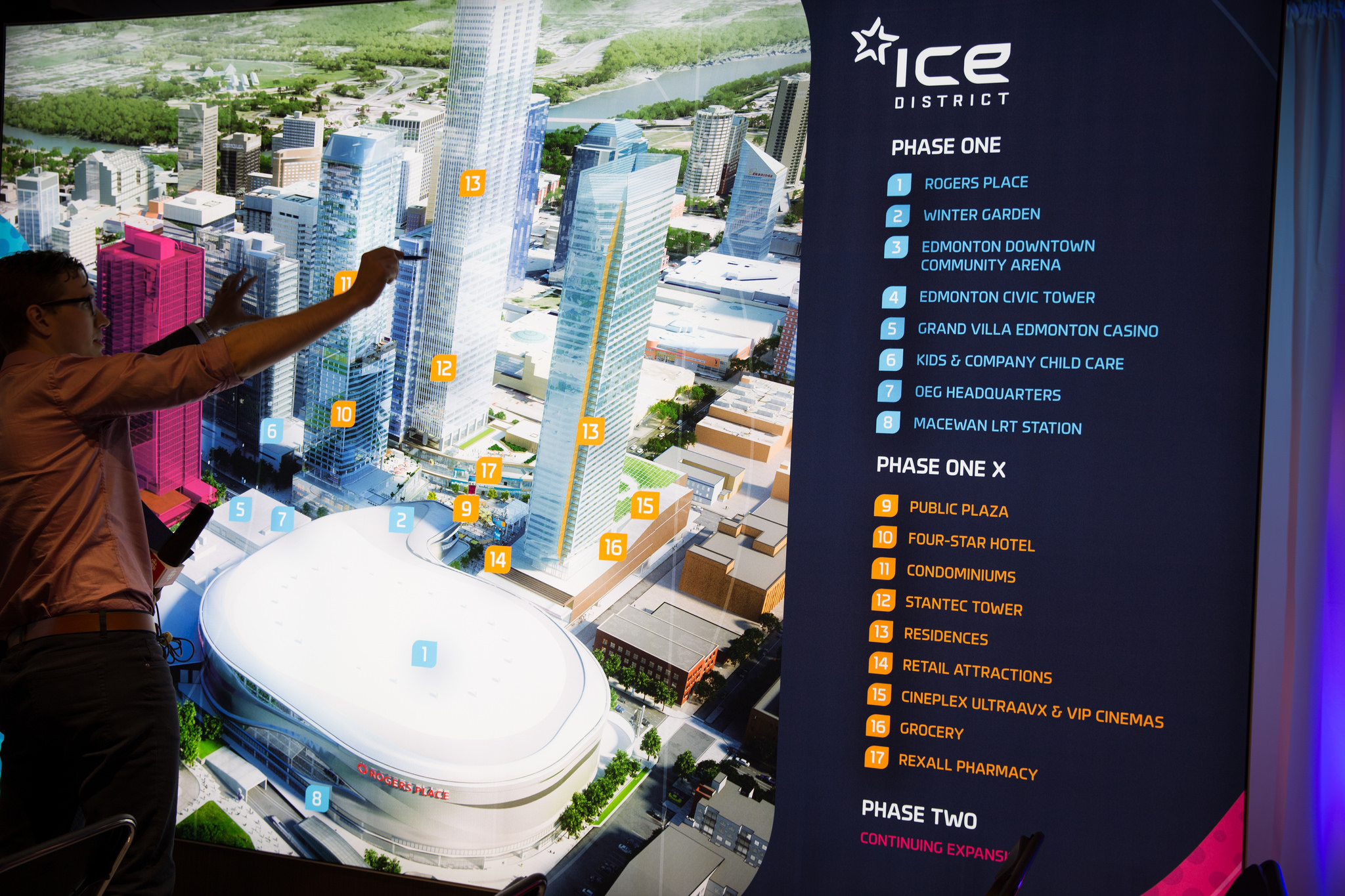 Meanwhile, the abutting homeless drop-in centre and night shelter have purchased their buildings. And according to CBC, the neighbouring detox shelter recently signed a long-term lease. Which means that somehow, this multibillion-dollar temple to sports and shopping will have to dance cheek-to-cheek with the down-and-out. A handful of the local hard-luck cases even landed jobs helping build Ice District. Whether they’ll still have those jobs once construction is complete is another matter.

As Oliver pointed out in his Last Week Tonight monologue, publicly aided stadiums rarely live up to the economic hype. A twenty-year study “consistently found no substantial evidence of increased jobs, incomes or tax revenues.” Another economist, as reported by The Nation’s Dave Zirin, made the case that literally dropping a billion dollars from the sky would have a more positive impact on local economies. The deal the city made with Katz can’t be justified with rational cost-benefit analysis.

So why build this arena—and the Ice District that surrounds it? The real goal, I believe, is to win back the city’s past glory with a new version of its storied West Edmonton Mall.

Many Canadians might forget this, but the WEM once was the world’s largest indoor shopping centre. It appeared in The Guinness Book of Records, and dazzled visitors with roller coasters, aquatic attractions, and four movie theatres (now down to one). It was constructed in the 1980s, when a twenty-something Katz was hobnobbing with the golden-era Oilers who’d brought his hometown a brief spasm of global attention. Bringing back that international spotlight has become an obsession for many Edmontonians. Throughout the arena debate—in city hall and city malls alike—the term “world-class” has been bandied about so often that it became a punch line cliché.

It’s not the first time Edmonton went in search of some world-classity this way. Shortly after WEM opened in 1983, and the downtown started haemorrhaging what little retail and street life it once had, civic leaders tried to strike a private-public deal with the mega-mall’s billionaire owners, the Ghermezians, to build another “world-class” mall at a site very near that of today’s Rogers Place. That was around the time Mordecai Richler, on assignment for the New York Times, was so appalled by what he saw on Edmonton’s main street—Jasper Avenue (or “Casper Avenue” to delight in its deadness)—that he nicknamed the city “Canada’s Boiler Room.” (And how did the downtown version of WEM work out? Less than a decade later, the Ghermezians sold their share for $1.)

A recent Globe and Mail column skewering the FIFA Women’s World Cup for opening the games in Edmonton suggests the boiler-room caricature still resonates in the east. “Edmonton, God love you,” wrote Cathal Kelly. “In some ways you are the romantic home of soccer in Canada. But when the whole country has to stand up in front of the rest of the world, you can’t be the first one talking. We just need you to stand there quietly, looking supportive.”

The backlash to that column suggests that Kelly’s opinions are not universally held. In recent years, many Canadians have come to be more familiar with the Alberta capital, as the oil-rich province seduces their friends and families with generous wages. Even Calgarians, who usually can be counted on to enjoy a laugh at Edmonton’s expense, expressed contempt for Kelly’s eastern parochialism.

And rightly so: A lot has changed in Edmonton since that failed attempt to bring WEM’s retail magic downtown and even since Katz hatched the arena proposal. Thanks to the oil boom of recent years, yuppies are everywhere. (It’s increasingly rare to meet someone on Jasper Avenue who actually was born in Edmonton—and that trend includes me.) Residential towers are popping up, independent of any so-called revitalization scheme. Retail landlords who once were lucky to attract a Payday Loans now play host to hyped-up restaurants, including a patisserie that locals waste no time telling you was named Canada’s best, by Richler’s son Noah no less.

Ice District soon will be wedged between MacEwan University’s new campus and the Royal Alberta Museum’s new home. Together, there’s $1.5 billion of development that Ice District can’t take credit for. Meanwhile, builders and planners are waging war on the ugliness of the city’s brutalist architecture; while a progressive, bike-riding, dimple-cheeked mayor and progressive, bike-riding, cheeky premier have repaired the ugliness of its conservatism.

And then there’s the one thing Katz definitely can take credit for: the NHL’s number-one draft pick, Connor McDavid. A.k.a. “The Next One.” A.k.a. “McJesus.” When the Richmond, Ontario, teenager showed up to his first day of practice this month, 3,000 fans were waiting to see him shoot pucks into an empty net. The city seems to have found its hero at one-thirtieth the price of the arena—and at no cost to the taxpayer.

Edmonton is again beginning to feel like a place with a grand future. But it’s getting there by itself. We never had to pay Daryl Katz to do it for us.