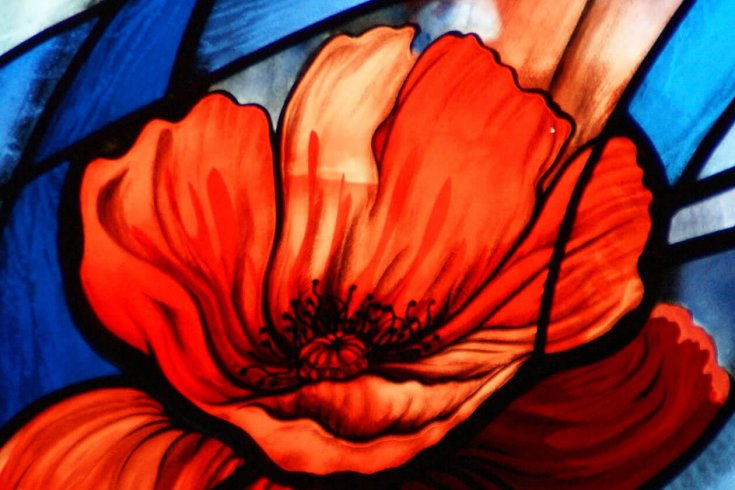 Working on my laptop in my townhouse in Toronto this summer, I received an unexpected request from a researcher in the UK. Channel 4 was planning a documentary to air this Remembrance Day to mark the 100th anniversary of the Battle of the Somme. The focus was to be brothers who had served in the First World War. Did I have any memorabilia for Roy Manley?

I never knew great uncle Roy. He was the little brother of my late grandfather, Norman Manley. They enlisted together, but only Norman came home. He never spoke about the war, but throughout my girlhood in Jamaica, I knew the black tie he always wore and the red rosebud I picked each day for his lapel were tributes to Roy—and that inside him lay a weight of silent sadness for the absent brother.

I sent the production team the photo of Roy in uniform and a copy of the letter from the war office that advised his two sisters of his death. I also sought out Norman and Roy’s correspondence with their sisters—which turned out to be some of the rare eyewitness accounts of life at the front during that war from black soldiers.

Then the researcher asked me what happened to Roy’s brother.

It was one of those “funny you should ask” moments.

Norman Manley, the Oxford-educated legal scholar and criminal lawyer. The founder of the Caribbean’s first great political party, the People’s National Party. The lifelong fighter for the well-being of Jamaicans. The father of Jamaica’s independence.

I listed books about him, including my own, Drumblair. When Channel 4 uncovered a photograph of Norman with President John F. Kennedy, they changed their project’s focus to include what a surviving brother had made of his life. They invited me to join them for filming at the Somme—and then visit Roy’s grave.

The trip began with a visit to several war cemeteries. The sheer multitude of graves astounded me. But it was just other men’s wars to me.

We went to grass-carpeted battlefields, still scarred by shapes of shell craters and trenches. But I felt detachment even when I saw the massive memorial and list of missing soldiers—335,000 in one battle. It was a war far in the past.

At the new Thiepval Museum in France, there is a room with a panoramic mural showcasing images from Joe Sacco’s graphic book, The Great War: July 1, 1916, The First Day of the Battle of the Somme. Paul Reed, the documentary’s historical consultant, walked me through the two rows of huge glass panels with their black-and-white pictorial account of horror and destruction. He pointed to the artillery gun where Norman and Roy were every day, night, and week for six months before moving on to Ypres. Not in the comparative “comfort” or safety of the trenches, but endlessly servicing and shooting these guns, guns that could backfire, guns whose never-ending noise left soldiers like Norman partly deaf. Guns whose flashes would identify their whereabouts, making it the battlefield’s most dangerous place.

And yet I still didn’t feel the war. I’d never cried any tears over it.

What had I known of my uncle? That he was the impossibly handsome young brown man who brought flowers to the old ladies in the village of Porus in deep rural Jamaica. That he was devoted to Norman. That he left for England in his early teens after his mother’s death. That he wrote poetry, was fiery and passionate, and wanted to become a writer.

Now, Paul Reed told me more. He’d found Roy’s name in an article while researching for his master’s degree. Roy attended Felsted Public School in Essex, England, and then the Army Officer’s Training School. When war broke out, he tried to enlist in the British Army’s Officer Training Corps. But even after using all his savings from his mother’s bequest for a commission, he was turned down; the British didn’t want black recruits.

By now Norman was a Rhodes Scholar at Oxford, studiously ignoring that school’s subtle racism. Appalled by the way his brother was treated, Norman enlisted with him in July 1915 as gunners in the Royal Field Artillery at East Deptford. At first the other soldiers called them “darkies,” but after Roy decked a few there developed a camaraderie, and the two well-educated brothers were often asked to write romantic letters to wives and girlfriends.

In January 1916, they left for France. Norman was promoted to Corporal, and was to be confronted with more prejudice. His fellow non-commissioned officers were the worst—they didn’t want a black man sharing their facilities. So Norman proposed a deal to his senior officer. He’d hand in his Corporal stripes if he could be transferred to the front with Roy.

That afternoon, we drove with the camera crew to the Somme. The acres of wheat fields were sprinkled with poppies, revealing nothing of the bones of lost soldiers in its earth. We walked through a grove of trees to the exact spot where the gunners stayed for six months. As the crew set up, a sudden black-skied squall came down, and soon the earth was like quicksand. “This,” said Reed, looking sadly down at the mud, “is what they fought through.”

The first morning of the battle was sunny, but then the rains never stopped for six months. And now I began to understand what they’d lived through. The terror, agony, and exhaustion.

We drove to the military cemetery at Poperinge in Belgium, an hour away. Roy died in nearby Ypres, though not in the infamous battle. In advance of the Battle of Passchendaele, while they prepared the guns, there was a small burst of enemy fire and a fellow soldier dropped. Roy crawled out to carry him to safety, not realizing he was already dead. With the soldier on his back, Roy was hit; a bit of shrapnel pierced his heart. Norman, away on a mission that day, returned to hear the news.

Passing the huge memorial cross in front of the cemetery’s rows of white headstones, I walked through a wooden gate. “Halfway across, then turn right at the third row,” Reed directed, and they left me alone to visit uncle Roy.

He was third from the end. “D.R. Manley. Gunner. Royal Field Artillery. 26th July 1917.” And to the right a large granite stone: “Their Name Liveth For Evermore.” It was so simple.

That’s when I felt our loss, and I wept. I now understood why Norman dedicated his life to creating a just society. Roy was lost uselessly. Norman could not protect him, and I believe Jamaica became his little brother. Norman’s fight on our behalf would matter.

I stood thinking of how for the rest of his life my grandfather would carry Roy as his inspiration. The black tie, the red rosebud, faithfully worn. That war changed Norman’s world profoundly, driving him into a life of national service that would change the history, and people, of my family’s country.

I knelt and buried in the earth a five-dollar Jamaican commemorative coin engraved with Norman’s profile. I felt as though I were bringing them together, closing their life’s circle.

It’s strange: a rosebush grew beside Roy; a red rosebud hung in front of his stone.

Rachel Manley has published poetry books and memoirs, including Drumblair, for which she won the Governor General’s Award.