A Man With No Face | The Walrus
Skip to content 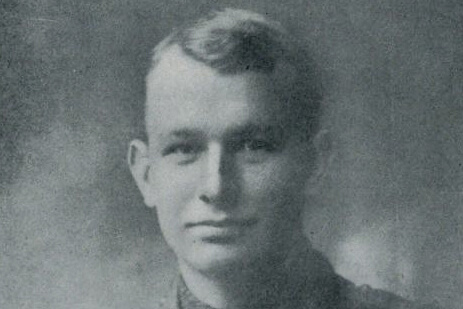 On the afternoon of September 26, 1916, Peregrine Acland was hit by machine gun fire and fell into a shell-hole. After fourteen hours immobile, watching the sky darken then lighten, his face was split in two by shrapnel. And yet Acland forced himself out of the hole, stumbling and crawling toward the flashing of distant British batteries, a trek he fictionalized in a 1929 novel titled All Else is Folly: A Tale of War and Passion:

His left hand he kept pressed against his side. With each step that he took, at the beginning of his journey, the wind seemed to sough from the hole in his side. He supposed that the lung hadn’t quite collapsed before . . . was still collapsing. Like the pinpricked bladder of a football.

Acland‘s novel was published by major publishing houses in three countries, received praise from the likes of Bertrand Russell and Frank Harris. I first learned of it in class on the very first week of my very first semester in university. The mention was fleeting, but the author’s name—Peregrine Acland—stood out; it is not one easily forgotten. The library of that same university didn’t have his novel (still doesn’t), nor did those of the city’s other three universities (still don’t), nor did the public library of the city itself (ditto). In the years before online bookselling, I hunted through used bookstores in Montreal, Toronto, New York, Boston, London, and Paris, but with no success. Well over a decade passed before I finally found a copy of Acland’s novel, stripped bare of dust jacket, lying in a dank corner of a small bookstore in Merrickville, Ontario. Price: $15.

All Else is Folly is a remarkable work, not only as a document of the battles, but for the fact that, unlike so many titles in what came to be known as “the war book boom,” it treads the ground between the jingoistic and the cynical. The first of our realistic war novels, it depicts life in the trenches in terms that are not so black and white as the novels that followed, achieving a balance that earned unusual applause from pacifists like Russell and Sir Robert Borden, the very prime minister who guided Canada through the conflict from 1911 to 1920.

Though presented as a work of fiction, it depicts the conflict as Acland lived it. Consider the name of his protaginist Alec Falcon; a son of certain Eastern privilege, he has been drawn to the West and the romantic life of a horse wrangler. Falcon is in Alberta when war is declared. He enlists and, like his creator, sees battle and horror at Ypres. Away from the fighting, the soldier fends off the advances of officer’s wives, frequents warm-bodied prostitutes and pursues a married woman.

Falcon attains the rank of major and looks to have a glorious future ahead before being cut down under fire in the Battle of the Somme. The descriptions, effective and chilling, became more so with my discovery that Falcon’s suffering so closely matches the author’s own:

His right eye, surely, must be out He couldn’t see with it at all. The blood was pouring down his cheek. He put his hand to his right cheek. A gob of warm bleeding flesh hung there. He wondered if that was his right eye?

The end of his nose, too, was cut. Almost cut off. The flesh hung loose.

And his mouth was split in two. Upper and lower lips, split through the centre.

“What a hell of a sight!” he thought to himself.

He had heard of men with no faces. He would be like that.

Opening the book for the first time—the copy found in Merrickville—I was surprised to find a preface by Ford Madox Ford. The author of Parade’s End wasn’t known to write prefaces; indeed, he notes as much at the beginning of this one. There follow six pages of praise, ending with this:

When I read of the marching and fighting towards the end of the book, I feel on my skin the keen air of the early mornings standing to, I have in my mouth the dusky tastes, in my eyes the dusky landscapes, in my ears the sounds that were silences interrupted by clickings of metal on metal that at any moment might rise to the infernal clamour of Armageddon . . . Yes, indeed, one lives it again, and the fear, and the nausea . . . and the surprised relief to find oneself still alive. I wish I could have done it as well myself: envy, you see, will come creeping in. But since I couldn’t, the next best thing seems to me to be to say that it will be little less than a scandal if the book is not read enormously widely. And that this is the truth.

All Else is Folly was published one year before fellow Canadian veteran Charles Yale Harrison’s better-known Generals Die in Bed, but escaped the calls for censorship that so plagued the latter. Both showed our soldiers at the front acting in ways that were less than heroic; on leave, both captured an atmosphere of loosening morals in which girl prostitutes earned good money. What saved Acland, I would argue, came down to connections. Acland’s father, F.A., had served as King’s Printer and Deputy Minister of Labour. Decades earlier, as an editor at the Globe, he had given a job to Mackenzie King. In the autumn of 1929, when All Else is Folly arrived in bookstores, F.A.’s old hire was Prime Minister of Canada. He was also an admirer of All Else is Folly; one diary entry from November 1929 has the Liberal chief up reading the book at three in the morning.

The fledgling novelist had allies amongst the Conservatives, as well. Prime Minister Borden had been present on March 3, 1917, when Acland received the Military Cross at Buckingham Palace. The wartime prime minister praised All Else is Folly with words that were reprinted in newspaper advertisements:

No more vivid picture has been painted of what war meant to the average soldier. Its arresting feature is the portrayal of war’s poignant realities, the relapse to primitive savagery of man daily companioning violent death, the crumbling of civilization’s thin veneer, the broken lives, the horror, the brutality, and in fine the futility of all that ensued unless each nation the will to win peace has had its birth.

All Else is Folly enjoyed several printings in Canada, and found a brief second life in a budget edition south of the border, but quickly fell out of print. By this time, Acland had settled into a comfortable living with his wife as a New York ad man. The Depression be damned.

Acland returned to Canada during the Second World War. Called home by his father’s former employee, he served as advisor, press officer and secretary to Mackenzie King. Later, after the prime minister’s retirement, he worked as manager of Toronto advertising firm Day, Duke & Tarleton. Acland died on May 11, 1963 at Toronto’s Sunnybrook Hospital. Published two days later, the Globe and Mail obituary mistakenly identifies Acland as a “native of England,” and misidentifies his book as “All Else’s Folly.”

There were no corrections. Acland came from a family that was modest about its accomplishments. The stone marking his grave at Toronto’s Mount Pleasant Cemetery lies in the ground and is often overgrown by sod.

Each Remembrance Day I attend the service held at our town’s cenotaph, roughly halfway between my home and the grocery store. Each Remembrance Day I think of my grandfathers: Edward Maurice Busby, who left his studies in medicine at McGill to serve in France with the 6th Field Ambulance; William H. Humphreys, a British machine gunner who would never tell the family how he earned his Distinguished Conduct Medal.

I also think of Acland, a man I never met, but feel I’ve come to know in some small way.