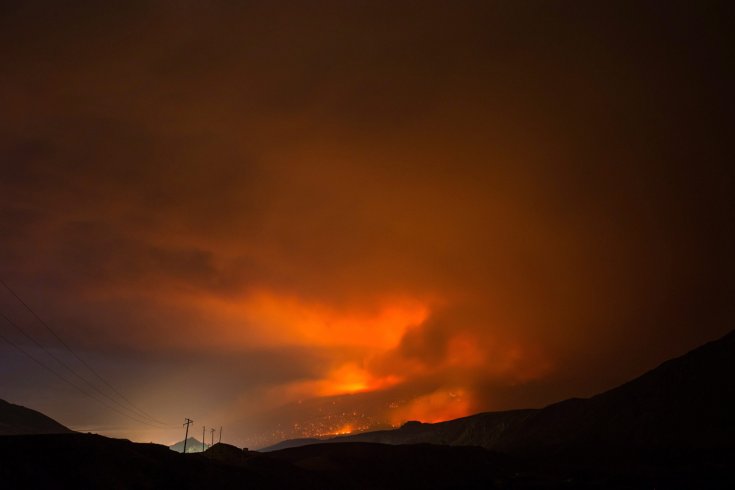 A wildfire burns on a mountain in the distance east of Cache Creek, B.C., in the early morning hours of Monday July 10, 2017. Photo by The Canadian Press / Darryl Dyck

It’s more like a war mobilization than a fire-fighting effort. As of July 12, over 180 wildfires continue to blaze across British Columbia’s interior forests, and an army of 4000 firefighters have been enlisted to battle fires that have displaced 14,000 people. Amid this state of emergency, the BC Wildfire Service is commanding thirty-two aircraft and eighty “ground-attack” vehicles. Mutual-aid agreements with neighbouring provinces and states promise to grow the fighting force ever larger as the fires spread.

In a province of vast forests, fire is a natural feature of the landscape, but a combination of factors is stoking the severity of this year’s fire season. For one thing, BC forests are getting drier earlier in the summer, while the forest floors are increasingly loaded with dead trees—the detritus of a multi-decade infestation of the mountain pine beetle. Exacerbating matters is sixty years of efficient fire suppression—by eliminating most fires from the landscape altogether, we have paradoxically ensured that when fires do happen, there is plenty of fuel to feed the flames.

Lori Daniels, an ecologist with the University of British Columbia’s Department of Forest and Conservation Sciences, says there is a way forward to ensure that future fires, even as climate change progresses, are not so destructive and dangerous to people. If it’s going to work, though, British Columbians will first need to accept the inevitable role of fire in keeping their communities safe.

Starting in the 1980s, the mountain pine beetle began a march across the interior that would change British Columbia’s forests forever. Eventually, 18 million hectares of lodgepole pine forest—about 20 percent of the entire provincial land base—was partially or entirely destroyed. Unnatural forces aided the beetle’s progress: historically, the pests were kept in check by frigid temperatures that would routinely occur during the early winter months of November and December in interior BC. But not long after the first outbreaks, those early winter dips below -30 degrees Celsius became less frequent.

The UBC ecologist has witnessed the aftermath of the beetle first hand—a visual she describes as looking at “a giant game of pick-up sticks” across vast stretches of forest floor. She maintains there is a direct connection between all of this beetle-killed wood (some of it two and three decades old) and the severity of the forest fires we are seeing in BC.

Besides the beetle, Daniels says the intensity of this year’s fire season is also due to BC’s forests getting drier and hotter earlier in the summer. In the past, a typical fire season would see the onset of hot and dry conditions in late July, with big fires appearing by the middle to late August. But since 2009, the fire season has started much earlier, with record high temperatures in late June and early July. As climate change continues, this situation is expected to become more of a problem.

“What we are considering extreme today, the top 95th percentile of dry hot days, becomes almost the average in 2050,” says Daniels. In the future, every summer could look similar to 2003—the year a state of emergency was declared and the infamous Okanagan Park firestorm destroyed nearly 240 homes. “It’s an alarming projection of the climate.”

Given that serious wildfires could become more common as climate change intensifies, what can be proactively done to minimize the danger, particularly for vulnerable interior communities?

Daniel Perrakis, a Fire Research Scientist with the Canadian Forest Service based at Victoria’s Pacific Forestry Centre, says that thinning trees within a two-kilometre boundary around communities, followed by controlled, deliberately-set fires—called “prescribed burns”—are the most effective means of ensuring that wildfires do not endanger people.

Thinning entails sending crews into that two-kilometre wildfire boundary zone and taking out trees, which creates space in the forest that prevents “crown fires”—intensely hot firestorms that jump from treetop to treetop, vaporizing entire trees as they go. Prescribed burning afterwards serves to eliminate all the dead fuel on the forest floor, timed to non-drought times when winds are favourable.

In recent years, the province of BC has invested about $160 million in two separate organizations ($85 million to the Forest Enhancement Society of BC and $78 million to the Strategic Wildfire Prevention Initiative) to address wildfire risks. Perrakis is encouraged by this but says more will have to be done, given that somewhere between 1.5 and 2 million hectares of forest will potentially require fuel treatment to protect communities in the BC interior.

With more resources must also come what Perrakis calls a “cultural shift” on the part of British Columbians—in how they think about the use of fire as a tool to fight fire. “It’s a tough sell, we should be doing more of this, and we probably will be doing more,” says Perrakis of prescribed burning. “But it’s expensive, and it’s confusing to people. The devil’s in the details.”

Perrakis says British Columbia needs to look to Australia. After its disastrous fire season of 2009—which killed over 100 people—Australia invested heavily in research and fuel reduction, and now burns hundreds of thousands of hectares each year in prescribed fires. He hopes it doesn’t take a similar tragedy before BC invests with similar urgency.

“We need people to recognize that by living in a dry forest environment, you’re living in a fire environment,” he says. “The question becomes, how would you like your smoke? Would you prefer it in prescribed fires, or in major disasters?”