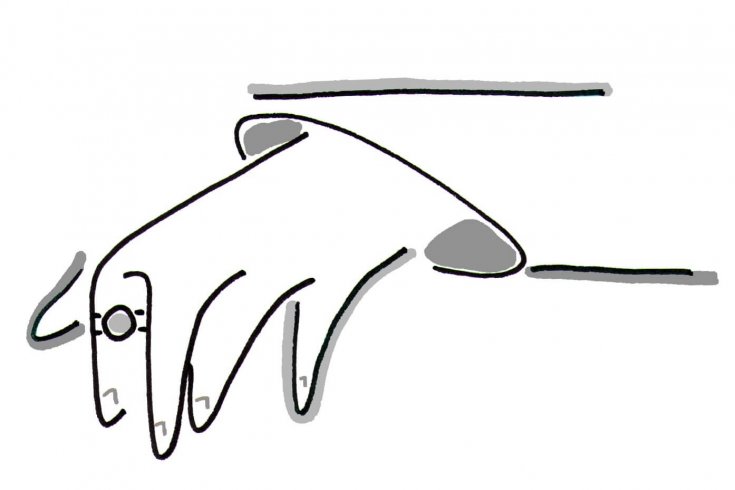 “I finally abandoned my dream of celebrity when I realized I had talent.”
—Napoleon Star, A Life

They still had bookstores in those days. Vand’s was a block from my apartment. Used stuff—a writer can’t afford new books. Vand’s is a Queequeg’s now but whenever I crack a book and s­ee the V stamp on the inner cover, I think of the old shop, the pill-rolling ogre, the mess on the floor.

And I remember Domini.

It was thirty years ago.

Our apartment had a sofa with an ink blot on it and—that was about it.

We read a lot. Vand’s had a buck-a-book bin, which was perfect if you weren’t particular. That’s where I dug up Introductory Logic and Styles his Mansion of Mystery series.

“How can you read that shit? ” I asked him once, as I plodded through predicate logic.

Styles had the one eyebrow. When he raised it, it made an impact.

“Logic is for blockheads.”

His motto. Styles was tight lipped—when he spoke, you leaned closer, you listened—and except for the L word, not given to repetition.

I said, “How do you expect to be a dick without logic? ” Meaning a private dick. “Ninety-nine point nine percent of cases are solved with” (lifting the book) “this tortuous stuff, right here.”

The eyebrow. I leaned closer.

I scanned the apartment. A month earlier, we had an armchair. A table, the month before.

If that 0.1 percent didn’t come knocking soon, we were done for.

Like everyone, I’d never heard of Fortuna Mars. Lobsters and socialites aren’t popular till they’ve landed in hot water. She was the daughter of Conrad Mars, the Whimsical Tycoon. If you’re not interesting, you have no business being rich, and old Conrad was anything but dull. When he jumped from the penthouse of the Last Frontier, Fortuna got every cent—or stood to, on her twenty-first birthday.

But a week before the day, she vaporized. Not a clue, not a trace, nada. Weeks passed. Months. One-and-a-half bil gathering dust and interest. No leads, no suspects. A mystery.

I’d mentioned Fortuna to Styles early on—there was a million quid reward for her return, courtesy of her fiancé—but he didn’t blink. He was busy gathering dust (but not interest) in some corner of the Mansion of Mystery.

One night. I came back from—it had to be Vand’s—and froze in the doorway. The sofa hadn’t run off. Styles was sitting in it, gripping his chin, gawking at—a TV.

I didn’t ask Styles “how,” “where,” “why.” I wouldn’t’ve got an answer. I just sat on the sofa next to him and watched the screen.

“BREAKING NEWS: It’s now one year since the disappearance of billionaire heiress Fortuna Mars and police are still searching for answers.”

Styles didn’t laugh. He had a goose egg for humor.

I knew we had a case, right then.

Don’t think. That was Styles’ maxim—and his method.

It’s an irksome gig at times, writing, but if I was ever a minute from splitting my head on the wall, Styles would materialize over my shoulder to whisper, “Don’t think.”

Then I’d take a swing at him, it was aggravating, and—stop thinking. And the words would come, every time.

Don’t think. That’s how he solved every case. No ratiocination, no chatter. No legwork. He just lived his inside cat’s life of window-watching and dozing and waited for his brain to have its epiphany.

I couldn’t sit still, though. I was getting used to having a TV—the first was just around the corner—and was making shit from fiction. So I poked around, slinging questions marks, digging up bodies. Soaked a notebook with ink and dropped it on Styles’ lap one afternoon.

He woke up, glanced at my notes for a minute—and went back to sleep.

Styles was still waiting for his brainwave when a Frenchman confessed to everything.

A stone-faced old guy with no lips. A failed writer no less, under the pen name Napoleon Star.

I’d never heard of him.

In the file photo, his pupils looked dilated.

“Despite confessing to the murder, Mr. Étoile has so far refused to tell police the location of Ms. Mars’ body.”

He didn’t say anything.

I hadn’t sold anything in a while. If Styles couldn’t solve a case . . .

I felt uncomfortable. I still got panic attacks, in those days.

Vand was sitting behind the counter, gripping a wine bottle. I wasn’t sure if he was conscious or not.

“Have anything by Napoleon Star? ” I asked him.

“Never heard of him,” he said, without opening his eyes.

I fished a pristine copy of Moby-Dick out of the buck-a-buck bin. Only the back cover was missing.

I plunked the white whale on the counter. In a puddle of wine.

His wine bottle was still half full. I downed it in a minute.

I stuck a dollar in Vand’s shirt pocket and walked out the door.

A semi-serious blond was interviewing Jean Étoile. With no evidence, no body—false confessions aren’t exotic—he’d been released from custody. There was still hope for us.

The press liked the guy, though. He was magnetically weird. They didn’t have much to go on.

“Did you kill Fortuna Mars? ”

He closed his eyes.

“You don’t want anyone to find her? ”

He sat back down. Breathed in and out. Closed his eyes, opened them, closed them. Hung his head.

He looked . . . right at the camera. At me. He scratched his cheek. I scratched my nose, instead.

He was breathing deep. Looking right at me.

“What a nutbar,” I said to Styles.

His eyes beamed in the TV screen light.

“If you put a turtle in a sea-chest and knock on it, he’ll answer any question.” This is what the guy in the basement told me in my dream.

There was a turtle down there. A chest, too. I assumed it was a sea chest.

The chest vibrated. It moved across the floor.

A silhouette was bent over my desk. Going through the drawers.

On went the lamp.

“Do you have any Aspirin? ” said Styles.

I rubbed my face.

I rubbed my eyes.

“I know where the remains of Fortuna Mars are, yes.”

A smile. Styles only smiled when he was serious.

He shook out another Aspirin.

“I’ll tell you in the morning.”

“What? We should go to the cops right now and—”

“The library doesn’t open till nine,” he said. Then: “Goodnight.” Closing the door behind him.

I rubbed my forehead. I had a headache.

The bottle was still on the desk. I grabbed it.

It wasn’t Aspirin. It was Demerol.

There were eight hobos waiting for the library doors to open. Plus Styles and I.

The clock struck nine, the hobos ran in.

An older hobo sucker-punched a younger one, who turned and bit the old guy’s face.

The librarians tilted their heads.

“Should we do something? ” I asked Styles.

“The police will be here shortly,” was all he said.

I followed him into Fiction.

In between Stapledon and Steinbeck were a dozen pristine hardcovers.

“Napoleon Star,” I said, running my thumb down the lot.

I grabbed one—Poor Melville and Other Stories—and tried. It was glued shut, it felt like. It didn’t take much to pry it open.

The whole book was hollow.

Styles grabbed Collected Poems, opened it slowly, like a chest.

Ashes. He stirred them with his finger. Picked out an earring.

I was messed up.

I couldn’t say a word till we got back to the apartment.

“There was no reasoning.”

“Just popped in there? ”

Then I looked at my friend, really looked at him. Right in the eye.

He left you wondering.

Two men were world famous, that day. Domini, the great detective. And Étoile.

If we’d had a phone, it would’ve been ringing off the hook.

We watched everything on TV.

After the cops deposited him in the back seat, Jean turned his face to the cameras. He mouthed something, whispered something. Three times. There’s no way of knowing, but . . . . It seemed to me like “celebrity.” Then he beat his head against the window till it bled.

He was a nut but I felt sorry for him. If people had read his books to begin with…

I really struggled back then. The Demerol in my desk. It never came to that, thank god. It could’ve.

Styles didn’t answer. He was elbows deep in Mansion of Mystery.

When I got back from Vand’s one night a week later, there was no sign of Styles. The guy left the apartment annually, at best. I guessed he was due.

I sat on the ink blot, switched on the TV.

I switched it off. I cracked open Moby Dick.

An hour later, the door opened.

He set down the brown bag he was carrying. Reached into his right pocket, pulled out something, passed it to me.

A check. Made out to Styles Domini. For five hundred thousand quid.

Then he reached into his left pocket. Pulled out a ring box. Took out a ring with a huge blue rock.

“A cremation diamond,” he said, handing it to me. “Her fiancé had two made.”

I got a chill. I felt sick.

“No thanks,” I said, handing it back.

Styles shrugged. Slipped it on his right hand ring finger. I thought it was morbid, but . . . . He always wore it, after that. A blue diamond. His trademark.

He reached into the brown bag.

It was my turn to smile.