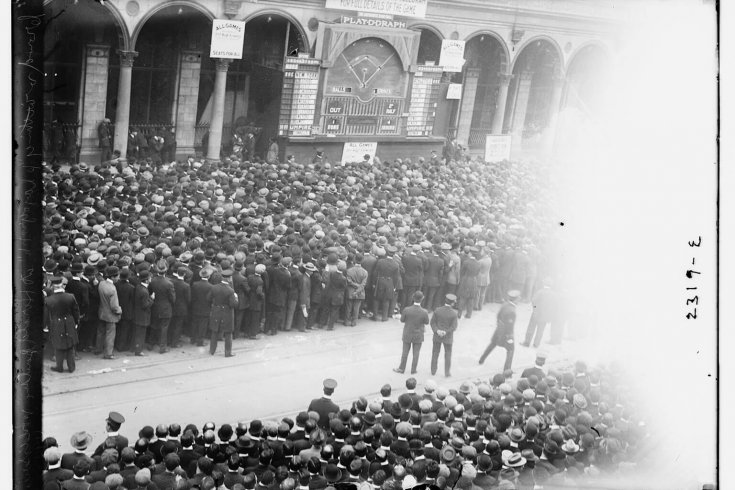 A crowd watches the 1911 World Series on a playograph at the base of New York’s Herald Building.

For a fan, game four of the Toronto Blue Jays’ division series against the Texas Rangers had a bit of everything. It started with a bang—two actually, a pair of first-inning Jays home runs that gave all my baseball-nut friends, who’d been talking of nerves during the pregame, an excuse for a relieved howl. The second was an opposite-field blast by Chris Colabello, after which the Colabello-obsessed among us again traded nuggets from his amazing backstory, his seven years in the desert of the unaffiliated independent-league minors before grinding his way into a starting roll on the playoff-bound 2015 Jays.

The Jays cruised through the middle innings with a six-run lead—the first time in the series, after dropping the first two games at home, where there was finally time and cause to speculate on the madness of a possible game five in Toronto. When Jays manager John Gibbons brought in ace pitcher David Price as a reliever in the fifth, all conversation among my crowd swayed to a sort of overwrought, multi-stage hand-wring over the thinking behind it: what it might mean for Price and beloved starter R. A. Dickey and the pitching plans for game five. The game ended slightly closer and tenser than many of us might’ve liked (TOR 8, TEX 4), but the result was never really in doubt and we’d had a laugh or two playing armchair manager.

All in all, it’d been a fun, mostly festive gathering. This was especially remarkable since I never left my living room, where I’d been sitting mostly alone except when my daughter wandered through every other inning to check the score. My socializing had happened entirely on Twitter. As it so often does for me this amazing Blue Jays season, because Twitter is a fantastic medium for talking baseball.

The pause between pitches is just long enough to fire off a quick tweet. An uneventful, routine inning provides ample time to trade trash talk and second guesses and GIFs of the previous inning’s heroic catch. I like to think of Baseball Twitter, at its best, as a wonderfully nostalgic revival (and digital enhancement) of the local newspaper’s turn-of-the-last-century public scoreboards—big mechanical billboards with names like “Play-O-Graph,” which were often mounted to the front of newspaper offices, where crowds would gather in the street to follow a game pitch by pitch as the newspaper’s telegraph fed the results.

I spent the bulk of my childhood immersed in and obsessed with baseball. I used to know Expos catcher Gary Carter’s key end-of-year stats (HR/RBI/BA) for most of the early ’80s by heart. I hooted at Blue Jays opponents from the cheap benches beyond the outfield wall at Toronto’s old Exhibition Stadium on several fine summer afternoons, and I was inside the SkyDome for Rickey Henderson’s total domination of Blue Jays pitchers in the 1991 American League Championship Series. I lost my freaking mind when Joe Carter touched ’em all to seal the Jays’ second consecutive World Series two years later. And then . . . and then, over the years, I lost touch with Canada’s last surviving major league team, and with the game of baseball in general.

This is a common story for many Blue Jays fans, at least on the surface. I drifted from baseball in part, yes, because the Jays did nothing much worth talking about for two decades after their back-to-back championships. But for me, anyway, the parting was also because I had no one to talk about baseball with. My university and early career social circles were obsessed with music and movies and books, not sports. My wife and her family are big into soccer. And for the last twelve years, I’ve lived in Calgary, a city that said farewell to its last professional baseball team, the AAA Calgary Cannons, in 2002, mainly due to lack of interest.

Baseball is a deeply social game, both on the field and among the fans. Players chit-chat in the dugout throughout the game and sometimes gather on the mound between batters for conferences. One of the signature stories from the Blue Jays’ 1992 season, which ended in the team’s first World Series victory, is about how star first baseman John Olerud cost the Jays an early-season win because he was shooting the breeze with Minnesota Twins slugger Kirby Puckett. Every summer, inconsequential midseason games play in the background on radio or TV as fans play with their kids or make dinner or work in the yard.

Even live, watching baseball is often a sort of conversation about baseball with the game as backdrop and punctuation. One of the most memorable vacations of my childhood was a family trip up the west coast of the US following the Montreal Expos. I remember the fans in the stands more than the games. The creative hecklers rooting on the luckless San Diego Padres. The old guy in front of us at Dodger Stadium who had a hokey little rhyming cheer for every player (Whaddaya say, Cey? Whaddaya say, Cey?). The middle-aged couple who recognized my family at Candlestick Park in San Francisco from a game earlier in the road trip and came over to introduce themselves as the parents of Expos third baseman Tim Wallach. (They sat with us for a couple of innings, providing a delirium-inducing peek behind the curtain into the life of a pro ballplayer.)

To be a fan of baseball is to talk about baseball, to trade stories and stats and crazy pet theories and oddball obsessions. I’d stopped being a dedicated fan in large part because I had no one to trade with. And then, in the mounting spring-training buzz generated by the revamped 2013 Blue Jays, I discovered that an unexpected number of friends and work colleagues and casual acquaintances and people I only knew as interesting Twitter feeds were big into baseball. And that the medium turned out to be a delightful accompaniment to the game.

Actually, at first, the game was the backdrop. We’d cancelled our household cable subscription, so in the early months of the 2013 season I would follow along on ESPN’s online Gamecast site (which is a near-perfect digital copy of those old playographs, by the way) and see what folks were saying on Twitter. I remember in particular an epic eighteen-inning Jays game in early June, collective interest in the game’s outcome waning batter by batter until what remained was a protracted series of one-upping Twitter one-liners on the theme of infinity. (“You guys enjoy the doubleheader? ” Gibby quipped to the press afterward, joining and possibly winning the one-liner contest.)

I loved it. I was hooked.

Through the ups and downs and ultimate frustrations of 2013 and 2014, I re-immersed myself in the Jays and fell back in love with baseball. It was like coming home. And though I was now watching the games on our reconnected cable TV and even took my daughter to see a pair live—one each in 2014 and 2015, both by coincidence against Detroit, the latter the instant-classic Edwin Encarnacion home-run hat trick game—still, for me, baseball mostly lived on Twitter.

The 2015 Toronto Blue Jays have been a surprise, a thrill and delight, a life lesson in perseverance, a fundamental attitude adjustment for a fanbase too quick to expect the worst. Ultimately, this has been maybe my favourite season ever as a fan, the most engaged and excited I’ve felt. It’s been the most intimate season. Because I’ve followed it, often pitch by pitch, on Twitter.

For the first game of the Jays’ American League Division Series, I met with a group of fellow fans at a Calgary pub. The group formed on Facebook, but I knew a number of the attendees best from Twitter . For game four, I sat in my living room trading thoughts 140 characters at a time with much the same crowd (and many more). The in-person approach was more enjoyable, but not incomparably so. I’ll be down at the pub for game five, don’t get me wrong. But I’ll also have to make an effort not to spend too much time on Twitter while I’m there.