A System from the North | The Walrus
Skip to content

It was snowing the day the boy walked away. She was standing outside with the Tadpoles—they went outside every day, regardless of the weather; it was part of the Philosophy—preparing to herd them back inside the building. She counted three, four, but not five. The child had a blue coat that ought to have stood out against the blankness of the snow. She didn’t see him anywhere. She closed her eyes, teary with melt, and tried again. Three, four. Not five. He was gone.

Inside, the Tadpoles hung their coats on wooden pegs. Despite the openness of the Philosophy, they were pliant and fearful, forever looking to her for orders she wasn’t supposed to give. Today was housekeeping day, so she straightened her chemise and took the straw broom out of the closet, saying nothing. Silence was also part of the Philosophy. The children watched her. Did they know one of their number was gone? She couldn’t tell. A little girl, Hester, took out her toy broom, made of twigs and feathers, and swept also.

The indoor heat made her cheeks flush as she swept. She knew she should report the child’s disappearance to the Director. The Centre’s training had been elaborate and particular. There were laws. There were safety considerations and concerned parents. She was to convey any problems, immediately, to the Director, in her office, a converted bedroom on the other side of the quiet house.

Instead, she went out into the hall, passing the closed doors of the rooms that housed the Joeys, the Antlings, the Crias. All were quietly cleaning, scrubbing and dusting the furniture. She thought maybe the missing child had wandered into the wrong room, but she didn’t see him anywhere.

For losing a child, she knew she would be fired. She had plenty of experience with fireable offences. At the restaurant, she had been fired for giving her boyfriend free drinks. You could say she did it for love, but truthfully, she did it for sex, for the things that they did in the back of his car after her shift had ended and that she had wanted more than she’d known a person could want a thing. At the shoe store, she had been fired for staring out the window dreamily, ignoring the people calling out for help with their sizes. “Miss, please, I need an 8 in a wide calf?” It was a problem she had. Sometimes she was rooted to the ground, paralyzed by the flights of her mind. A paradox: to be still and wandering at the same time.

Maybe this was what had happened to the child: maybe he was stuck somewhere, daydreaming, while the snow fell around him. She looked out the front windows of the building, hoping to see a small, still form.

The Centre was new. She had met the Director at the farmers’ market one day, when she was helping her friend Cerise scoop artisanal ice cream. Cerise had a good deal, all the ice cream she wanted for free, and she didn’t get in trouble for giving it away to friends. The Director was a beautiful woman wearing high heels and carrying a straw basket hooked under her arm. A spray of carrots lay in the basket, arranged just so. The girl couldn’t stop staring at them; she’d never seen carrots with their tops on before. These carrots were clumped with dirt, gnarled like old fingers. Cerise said people paid extra to get them that way.

The Director made small talk about ice cream, her eyes darting back and forth shyly. Without thinking, the girl reached out her hands and touched the carrots, rubbing the dirt, and then she realized the other woman was staring at her, not angrily but steadily. Their eyes met with a jolt that was almost romantic—it was bodily, at least, and mysterious—and the girl looked away, embarrassed.

The Director bought a pint of the blackberry and then pressed her palm on the card table, leaving a business card behind.

When she hired the girl, she’d explained that the modern world held too many distractions. The girl had nodded. The Director had indicated the girl’s bag with her chin. “I’m sure you have a device in there. Perhaps more than one. You will not use them here.” The girl had nodded again. She rarely used her devices, but she had plenty of distractions all the same. She knew better than to confess this.

“Some of our children are troubled,” the Director had said. “We calm them.”

It was true; the Centre was calm. Everyone spoke in hushed voices. In the mornings, the girl arrived, changed into her chemise, and opened the room. The children filtered in and went about their business. She had been told to allow them freedom as long as they weren’t hurting themselves or one another. At lunchtime, she served them vegetable soup in wooden bowls, and they ate gravely, dangling their feet from low chairs.

The boy who had disappeared was just like the others. Sometimes he cried for no reason. Sometimes he fell down, also for no reason. She had been told not to give comfort, but he often sat next to her as she sewed her buttons, observing, and she felt him take something from her, some needed and unexpressed thing. Only once had she seen him completely agitated. She had snuck her device into the room, under her chemise, because she was waiting to hear from her boyfriend—not the boyfriend from the restaurant, but a new one, whom it turned out she wanted even more. He was short and had a beard and wore motorcycle boots, and she waited every moment for him to call. When he did, music sounded in the room, a pop song that jangled in sweet tooting beats. It always made her happy, that song, but the boy instantly put his hands over his ears and said loudly, “Turn it off turn it off turn it off,” and he kept repeating this long after she had turned off the phone, shaking his head too fast over and over, and he was still repeating it at the end of the day when his mother came to pick him up. His mother looked at the girl, and she shrugged as if to say How should I know? and his mother frowned and took him away. Even so, she didn’t worry that the child would rat her out. They had, she felt, an understanding.

It was snowing harder now, the air thick as felt. She felt muffled, fevered. Last year, there had been a major news story in town. A boy had walked away from a party, and his body had been found two days later in the river. For those two days, his picture had been everywhere. When the news came of his death, everyone cried. She remembered it because he’d been the same age as her own stepbrother, who hated the cold and spent all his time in his room playing video games. People blamed the parents, but the girl knew it was nothing they could have controlled, just as her parents couldn’t stop her from quitting school or losing jobs, or her stepbrother from staring gape-mouthed at monsters, his eyelids twitching from lack of sleep. Each person heard a voice that lured, that couldn’t go unanswered. It only depended on which voice was yours.

Down the hall, a door opened; in a moment, the Director would appear, making her afternoon rounds. The girl slipped back inside her room. Two of the Tadpoles lay on their sleep sacks, curled as snails. Two more were by the shelves, moving cups and spoons into an arrangement more to their satisfaction. Three, four. Still not five. He had disappeared like a magic trick. The Director told the staff often that the Centre existed to bring back to childhood the magic that the modern world sought to steal. She always called it “the modern world” in a disapproving tone. To be modern seemed the worst thing a world could be. One of the other teachers had told the girl that the Director used to be a lawyer. “Was she fired?” the girl had asked. “No,” the teacher had said. “She made a million dollars and retired.”

In the spring, they were supposed to plant seeds. There would be a garden, and the children would eat from it. The girl had already pictured the tiny carrots they’d pull from the ground, the little twisted fingers.

The missing child had once cut his finger on a sharp stone when they were playing outside. He had sat down on the ground, which was muddy, and stared at the wound in fascination. From time to time, he had licked the blood. He seemed to like the taste. She remembered this because she had liked the taste of blood as a child, too, and still did. It was what she thought of as the taste of her own self.

Outside, the blizzard. It was too late to look for him now. Too late to tell the Director. She would have to account for the delay, and there was no accounting for it. There was only her still and frozen brain, her dreaminess and fear, a gap where common sense was supposed to be. The wind clawed at the door of the room, demanding to come in. It was a system from the north, she’d heard the weatherman on TV say this morning. It will bring us all kinds of trouble.

The girl squinted out the window, seeing nothing. One of her boyfriends had told her she had a lazy eye. She’d never heard this before and had worried over it for days. Eventually, she had asked her mother if it was true. Her mother had snorted. “Every part of you is lazy,” she’d said.

The girl made up her mind. She put on her coat and prepared, at last, to look for the child. The wind clawed again. When she opened the door to seek him, he was right there, huddled against the side of the building, his cheeks red as blood. He was shaking his head as he had the day of the pop song. She couldn’t tell whether he was shaking it at the snow or at the door. Maybe at the modern world. She spoke his name, and he stopped shaking, like a magic trick. For the rest of her life, she would believe that she had summoned him back from a great distance, that her mind had stretched out into the blankness of the universe like a rubber band expanding and then snapped him back to her. Because she never told anyone this theory, there was no one to contradict it, and it never ceased to bring her comfort. “Come inside,” she said, and he tripped and tumbled toward her with a great shuddering force as if the snow itself wanted him in her arms.

Alix Ohlin is the 2017 Mordecai Richler Writer-in-Residence at McGill University. 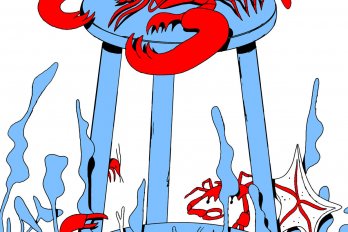 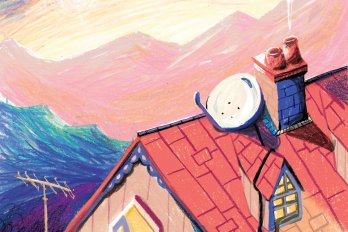 The Decade in Fiction

Fiction: Stories commissioned by The Walrus that is not based on real people or facts.