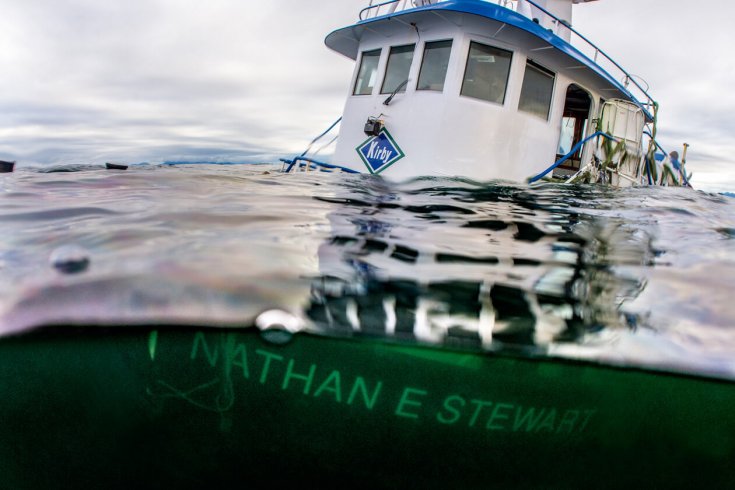 In early November, Justin Trudeau appeared at a Coast Guard base in Vancouver’s Stanley Park, announcing $1.5 billion to be invested in ocean protection, including the development of “world leading marine safety system” for Canada’s coasts. In making the announcement, Trudeau was setting the stage for what many believe will be the approval of Kinder Morgan’s Trans Mountain Pipeline, which has been conditionally approved by the National Energy Board and is awaiting a decision from Ottawa by December 19. By making the announcement, Trudeau was also addressing one of British Columbia Premier Christy Clark’s key conditions for allowing tankers to ply the coast.

Like Enbridge’s proposed Northern Gateway Pipeline that would terminate in Kitimat, BC, the plan from Texas-based Kinder Morgan is a controversial one: the expansion of an existing pipeline that moves oil from Alberta to Burnaby to one that would bring more than 400 tankers within Vancouver city limits at Burrard Inlet annually.

The dispensing of cash for environmental safety was supposed to be a good news story, but there were two wrinkles on the day. To the chagrin of environmentalists, the prime minister brushed off questions about his promised moratorium on north coast oil tankers, a key 2015 Liberal election promise, which is supposed to be announced before the end of 2016. And at the very moment Trudeau was talking to reporters, the coastal community of Bella Bella—which lies between Vancouver Island and Haida Gwaii—was on day twenty-five of a struggle to contain a diesel spill from a tugboat, the Nathan E Stewart, that ran aground off shore.

Fuel contained in sunken ships is like a time bomb in close proximity to marine resources necessary for many First Nations’ subsistence and livelihood.

For nearly a month, British Columbians had been exposed to images of a futile north coast clean up delayed and exacerbated by foul weather and an even worse emergency response. So a practical question was dawning as Trudeau chatted up tanker safety: if containing a small diesel spill from a tug boat was this much trouble, what difference would new investments in “world class” safety mean if a 245-metre-long tanker holding nearly three quarters of a million barrels of oil, the type of ship Kinder Morgan’s marine terminal is designed for, got into serious trouble on the coast?

Jessie Housty, a councillor and emergency response official from the Heiltsuk First Nation community of Bella Bella, says it took twenty-two hours for the equipment and personnel to arrive from Prince Rupert following the October 13 diesel spill. And by the time they arrived, the damage was done. A large quantity of diesel had escaped, flowing into Gale Pass, soaking a majority of the Heiltsuk’s productive clam beds and intertidal food harvesting areas. “The biggest lesson from this is we need to significantly increase our spill capacity on the central coast, not as a way of giving permission for new Anti-pipeline protest in Vancouver on November 19, 2016. Photograph by Kent Linspipelines, but just to be able to adequately deal with existing traffic,” she says.

Big tankers generally do not travel the inside coastal waters at present (a shipping route that hugs the coastline north of the tip of Vancouver Island, past Bella Bella, and through the Great Bear Rainforest to Prince Rupert) but there is already a lot of dangerous traffic. Not only do many remote communities rely on small marine shipments of fossil fuels for their boats and diesel-generated electricity, this inside passage is a long-established marine highway connecting south-east Alaska and Washington State. (The October 13 spill was made by a Seattle-bound tugboat, returning from delivering a barge of diesel to southeast Alaska).

Then there are the myriad proposals to export Alberta oil to Asia from a port on BC tidewater: Enbridge’s plan to have oil tankers plying the inside waters of the Douglas channel; the Kitimat Clean project, a brainchild of BC publisher David Black, which seeks to refine Alberta bitumen on the coast and ship it to sea; and Pacific Future Energy, another scheme to ship fully refined oil from the coast—whose management team includes strategist Mark Marissen, Premier Clark’s ex-husband. And this is just a few of them.

Housty says that one of the positive things to come from Trudeau’s announcement is the mention of “building local emergency response capacity” for spills on the coast. “If you look who was on the water in those early hours of the diesel spill, it was Heiltsuk people,” she says.

The response was similar in 2006, when BC Ferries’ Queen of the North sunk off the remote Gitga’at First Nation village of Hartley Bay, about 120 kilometres southeast of Prince Rupert. The quick action of locals saved many of the passengers. What these early responders could not do, says former Coastal First Nations (an alliance of about nine north and central coast First Nations) executive director Art Sterritt, was address the 220,000 litres of diesel in the ship on the deep seabed. This fuel is like a time bomb, sunken in close proximity to the fish and other marine resources the Gitga’at need for subsistence and livelihood.

Sterritt, who now works for the Gitga’at, says many coastal First Nations are watching Trudeau’s pending tanker moratorium closely because so much is at stake. A lot of unease exists over how Trudeau will choose to define crude oil. A moratorium applying only to bitumen would certainly implode Enbridge’s Northern Gateway project, but would create a loophole for a number of oil export schemes that are planning to ship refined oil from BC ports—including the two projects above, as well as Eagle Spirit Energy, backed by Vancouver Canucks owner the Aquilini Group. “If you announce a tanker ban with bitumen but say you are going to allow refined product, they might as well not announce it,” Sterritt says. “People have already figured out how to get around that.”

Sterritt adds that it’s misleading for the federal government to position Canada as world leaders in spill response and cleanup, given what has happened near Bella Bella. “Even if you become best in the world, there’s still no single technology to clean up crude oil,” he says. “And as we’ve seen in Bella Bella, you can’t clean up diesel or gasoline either.” In the Nathan E Stewart spill, the Heiltsuk reported that the plastic booms eventually put in place could not contain the surface diesel because the current sucked the fuel under the booms. The contaminant also couldn’t be effectively recovered by skimmer boats, or by absorbent pads dropped on the surface because the sheen was too thin.

Complicating the issue of a moratorium is the uncertainty surrounding whether a previous moratorium put in place in the early 1970s by then prime minister Pierre Elliot Trudeau, is still in force. In 1971, David Anderson (who later served as environment minister under Jean Chrétien) instigated the creation of a ban on tanker traffic on the inside waters of the north coast. Anderson, now seventy-nine and living in Victoria, says the original moratorium was prompted by the explosive growth of Alaska’s oil industry at the time, which Trudeau feared would mean a massive increase in oil tanker traffic (and accidents) between Alaska and Washington State. The goal was to ensure US oil tankers travelled a safe distance from the Canadian coast, so that accidents would be less destructive to the fragile coastal ecosystems. Anderson recalls that to impose those rules on the Americans, Canadians had to demonstrate they were willing to restrict their own activities around oil as well: active oil drilling on the BC coast was stopped, and companies like Trans Mountain (the previous owner of the pipeline that Kinder Morgan now owns and is planning to expand) were subject to a cap on the amount of oil they could export by tanker.

Anderson says the oil industry has disputed the existence of this grandfathered cap, because the moratorium was never formalized as an order in council or enshrined in law, but instead operated as an active policy of the government. British Columbians are forced to look to the future now, and to our current prime minister, to create an undisputable moratorium enshrined in law.

It’s on this last bit that David Anderson offers advice to Justin Trudeau. “Your father knew something that I think you should pay attention to. He was a smart man. He put in a ban on the north coast, and he put in a moratorium. Trudeau needs to say: ‘I will look very carefully before I change my father’s policies.'”