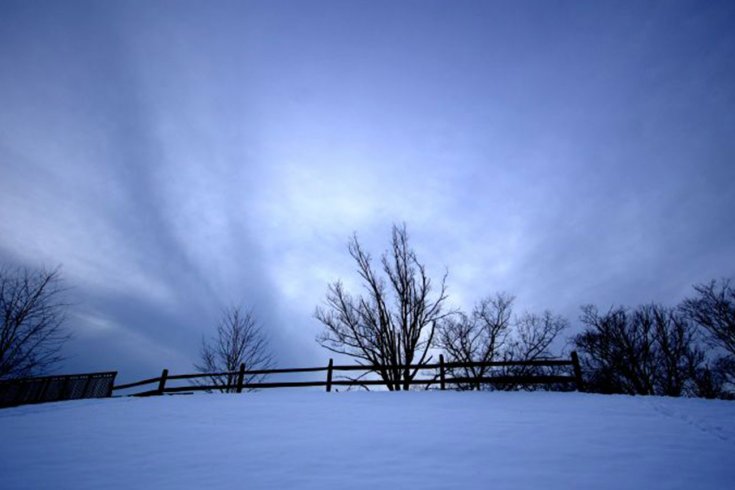 My uncle Richard died exactly the way he wanted to. He died in the bed he and his wife had shared for thirty-three years, in the house where he grew up, on the homestead his ancestors farmed. He died when the velvet buds were forming on the pussy willows, when the cows were giving birth, when the snow was melting, and when the geese were coming home from a winter in the south. It happened four weeks before he turned sixty-three, at around 9:30 on a Friday evening. The sun was down, and the coyotes were howling.

Richard’s wife, two daughters, newborn granddaughter, two sons, daughter-in-law, and brother sat beside him. They held his hand and touched his face and stayed at his side for long after he drew his last, rattling breath. They cried, they talked about what to do next.

No one called 911 or a funeral home. Instead, Richard’s family rang their death midwife.

Sarah Kerr is an artist, an academic, and a cat lover. But, more than anything else, she’s an expert in dying. Death midwifery is a relatively new occupation, with only a dozen or so working across the country. As birth midwives bring birthing home, death midwives bring dying home.

Three weeks before he passed, Richard took Kerr on a farm tour in his red pickup. He told her he didn’t want his body to be handled by strangers. He told her he wanted to die at home, and that a good ending would be his last gift to us, his family—so we would understand that there is no life without death. He took her to a special spot on the farm, the site of many marriages and celebrations—and one day, he hoped, of his funeral.

For as long as Richard and his wife had been married, they had always taken the more holistic, maybe more difficult, approach to life—from the way he pastured his cattle, to his wife’s home births, to their fight for the right to sell raw milk. They wanted his death to be no different. But a home funeral is no easy undertaking. It takes a lot of planning, and a lot of responsibility. Bodies decay, and Richard’s wife didn’t know what kind of state she would be in: she was unsure if she would be able to overcome her grief long enough to give her husband’s body the care it needed.

That’s why they called on Kerr. She coached Richard and his family on what do when death was imminent. The night he died, it was them who washed his body and placed bags of ice underneath it, as she had instructed. And it was them who dressed him—not in a typical funeral suit, but in his “Praise the Lard” shirt and favourite pair of jeans.

For three days, Richard’s body stayed on the left side of the bed, as extended family and close friends moved in and out of his room. At times, there were ten or more people inside, looking at him, crying, laughing, reading, saying goodbye. Other times, it was one person, with the door shut, saying his or her own private words. On the second of these three days, his body was carried out to that special spot on the farm for a few hours on what we called his “prairie canoe”—a stretcher made of poplar saplings and bison hide. Kerr officiated the small funeral. Some of the family tucked sage sprigs into the worn pockets of Richard’s jeans. We all had another chance to say goodbye.

Through it all, Kerr was there to support anyone who needed it. She doesn’t see death as problem, or as a medical event. Like birth, she says, death doesn’t always need technical intervention. My family isn’t religious, but she helped us express our grief to one another through rituals based on a variety of death practices from around the world. These offered a map that we could use to navigate through our emotions.

“Death is confusing and it’s overwhelming and everything is turned up-ended,” says Kerr. “A set of rituals gives you a path. It creates this container for people to process what’s happening.”

The rituals didn’t make Richard’s death easier, but gave us a chance to say what we needed to say. Whether it was a simple goodbye, or a funny story, or just what we were feeling in that moment. We could laugh, cry, or not say anything at all. But we all got a turn.

Death is the only thing we can know in life with certainty. It’s an inevitable, unavoidable conclusion, yet it’s also one of our biggest fears. Kerr believes this fear comes from how we build everything on the premise of a physical world—what you can measure, what you can weigh, what you can see. None of that matters in death. We see life and death as a light switch: on, then off. You exist; then you don’t.

“There’s nothing that the human psyche needs more than to feel connected,” Kerr says. “The idea of being lost—in the most fundamental, existential, forever-more-in-eternity-there-is-nothing way—is the most terrifying thing to the human mind.”

To say I’m not afraid of death is a lie. But I understand it. I grew up on a farm, and on farms, death is a recurrent part of life. Cats were often run over or killed by a coyote, and there was a good chance the meat on our table every night had at some point been a pet.

Before Richard, the only human death I remember is my grandpa’s. I was holding his hand when he died in the hospital. I barely had a chance to squeeze his frail fingers before we were ushered away, as if death was contagious. It felt wrong, handing him off to strangers when everything was still so raw. I had known him my entire life and he was suddenly gone. Not just his soul, but his body, too. There was no transition; no chance to adjust to what had happened.

My uncle Richard’s death, and what our midwife offered afterwards, not only opened my eyes but also gave me relief. It didn’t teach me how to overcome my fear of death, but it taught me how to appreciate its purpose. “The mark of a good death is that it’s a village-making event,” says Kerr. “Death is not a mistake. It’s not something the world shouldn’t have. It serves a purpose. And it brings people together when it’s done right.”