During the week before the Canadian Museum for Human Rights, in Winnipeg, opened last September, a knot of people stood outside a teepee opposite the colossal, glass-swaddled $350 million edifice. They handed out brochures advertising another museum—one without alabaster railings, interactive digital displays, or wealthy donors. The cheekily named Museum of Canadian Human Rights Violations is housed in a boxy, blue hockey arena on an island in Shoal Lake, 150 kilometres east of Winnipeg.

Taped to the walls of the arena are aerial photographs, yellowing newspaper clippings, and photocopies of government letters. These documents tell the story of a displaced Anishinaabe community. In the early 1900s, engineers looking for a water source to supply the growing city of Winnipeg recommended the lake on the Manitoba-Ontario border, crystal clear and at a convenient elevation and distance. In 1906, the Manitoba Free Press reported on a delegation that visited Shoal Lake: “There is practically no habitation, with the exception of a few Indians and an odd mining camp and no possibility of contamination from this source.” The federal government authorized Winnipeg to construct a 137-kilometre aqueduct. To facilitate construction, the community known today as Shoal Lake 40 was moved to a peninsula that became an island when engineers cut a channel to divert the tannin-stained waters of Falcon River away from the aqueduct intake.

The Museum of Canadian Human Rights Violations isn’t confined to the hockey arena. It’s a living museum that allows visitors to witness the painful consequences of decades of enforced isolation. First stop on the museum tour is the town dump—a pile of trash foraged by stray dogs. Garbage and sewage are confined to the island. Fall and spring—when the lake freezes and thaws—are especially treacherous seasons, because the 200 or so residents must cross the water to buy gas and groceries, and to receive medical care. In recent memory, nine people have died in the process. Many others have had close calls.

The community’s seclusion limits economic opportunities. Until the 1980s, people made a living catching walleye, lake whitefish, white sucker, and northern pike. In the late 1970s, the Ontario Ministry of Natural Resources, worried about overfishing, introduced quotas for the lake, and in 1983 closed the walleye fishery.

But the great irony is this: while Winnipeggers drink clean water, the people of Shoal Lake 40 must import theirs in bottles. A few years ago, the federal government paid for the design of a water treatment plant, but shelved the project because of its cost. For the past eighteen years, the community has been under a boil-water advisory. The official notice from Health Canada would make an apt addition to the arena wall.

Angela Failler, a gender studies professor at the University of Winnipeg, sees the town’s project as an imaginative challenge to our very notion of a museum: “They call Shoal Lake a living museum. That is such a great interpretation. Our idea of a museum is that it has four walls and a collection and contents, and that authoritative knowledge lives there. This museum turns that idea inside out and helps us imagine the potential for social-justice issues to be meaningfully taken up, and for communities to play active roles as opposed to being audiences or spectators.”

Daryl Redsky, fifty-three, tired of being a spectator long ago. He has a trim, muscular build and wears his short hair in a neat fauxhawk. His natural expression is stern, but his greeting is warm. He belongs to a network of Indigenous advocates, called “warriors” by some in the community, though he prefers the Anishinaabe word ogitchida, which he translates as “big heart—a person who has love of the people and the land.” A veteran of the Canadian Army, he has attended Indigenous-led protests and blockades across Canada: Grassy Narrows, Burnt Church, Caledonia. A few years ago, frustrated that decades of complaints had gotten his community nowhere, he began training people from his community in the skills of direct action and peaceful protest.

In 2007, a group of Shoal Lake 40 residents including Redsky walked the 140 kilometres to the future site of the new national museum. Band members also wrote to the architect, Antoine Predock, whose website describes the museum’s Garden of Contemplation as “a place of healing and solace” that honours “the First Nations’ sacred relationship to water.”

“The water that you would use in your building has, in fact, been taken at the expense of our community and our human rights,” they wrote. “Our friends and family members have literally died in that water. That water is making our people sick, and Canada’s refusal to stand up for our rights and to correct the isolation they imposed on us is killing our economy and our community.”

Years of action and negotiation are finally bearing fruit. Winnipeg is paying for the construction of two bridges, and the city, Manitoba, and the federal government have each committed $1 million to designing a road that will link the island to the Trans-Canada Highway (though no one has committed funds to its construction).

The Canadian Museum for Human Rights also has agreed to include the story of Shoal Lake 40. Soon, visitors to the Garden of Contemplation will learn about the people who paid the price for the water in those tranquil pools. Daryl Redsky hopes that visitors will also remember that 119 other First Nations communities in Canada still lack clean drinking water.

Josiah Neufeld writes for Broadview, the Globe and Mail, and Hazlitt.
Kellen Hatanaka 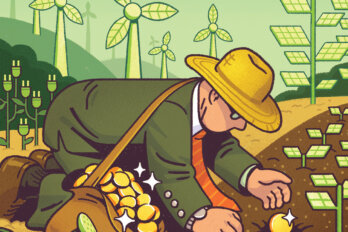 Green Investing Is Having Its Moment in the Sun. Can It Help Save the Planet?