A Party Monster Turns Forty | The Walrus
Skip to content 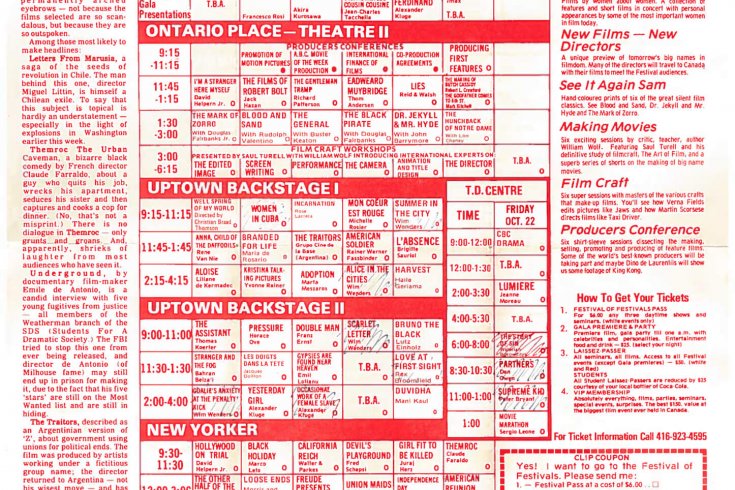 A programming guide to the inaugural Festival of Festivals, which grew to become the Toronto International Film Festival.

I first attended the Toronto International Film Festival fifteen years ago, when I bought tickets for the North American premiere of Wong Kar-wai’s In the Mood for Love. The Bell Lightbox was but a gleam in TIFF CEO and director Piers Handling’s eye. I was taking my first film studies course. Everything seemed heady and new.

Now on the eve of its fortieth anniversary, TIFF has become perhaps the most Canadian of all epithets: a runner-up for the crown of World’s Best. And as I tiptoe toward middle age myself, my once-passionate affair with the festival has fizzled into something like a loveless marriage.

Last year, the Toronto Star suggested that TIFF had lost the plot because of the “Buzz List,” a VIP package of five tickets to celebrity-packed films that cost a whopping $1,500. Also in 2014, festival organizers waged an ugly feud with their counterparts at the Telluride Film Festival over premiere rights to Oscar contenders. Tom Bernard, co-president of Sony Pictures Classics, called Toronto’s acquisition practices “imperialistic.”

This year, TIFF is presenting, in Handling’s words, “a programme that focuses on the new golden era of television.” This “Primetime” lineup includes Morgan Neville’s Netflix documentary Keith Richards: Under the Influence, as well as the pilot of NBC’s Heroes Reborn, a reboot of Tim Kring’s 2006–2010 superhero series. Which is to say: TIFF is selling cinema tickets for television shows that are coming very soon to cable and streaming services. (Keith Richards premieres globally on Netflix on September 18; Heroes Reborn hits NBC on September 24.) Home at the movies. What next, a Snuggie at every screening?

“Hopefully, there is something for everyone—not everything for everyone, but something,” co-founder Bill Marshall wrote in 1976, when he introduced the inaugural Festival of Festivals to the world (the name changed to Toronto International Film Festival in 1995).

I recently read that line again, and began wondering what Marshall, who has been chairman emeritus of the festival since 1980, would make of what TIFF has become.

Marshall had radical leftist origins: Both his and fellow co-founder Dusty Cohl’s fathers were card-carrying Communists. But as he approached age forty (he is in his mid-seventies now), he was ready for a bit of glitz. Creating a film festival, and then becoming its first director, fed his more frivolous desires. “I got more interested in capitalism and having fun,” he remembers. “The slum was a blast. But by 1976, I wanted to go where the rich people went.”

Soon, the rich people started coming to Toronto. Every September, this city rolls out its red carpets to mark their return. News outlets across the country clamber to report movie star sightings, and lend advice on how to stalk them. In 2013, Global News suggested bringing “an irresistible child” along on your hunt, as “stars are less likely to say ‘no’ to a kid.”

None of this is new. There is more swag and money involved than ever, but TIFF has always revolved around celebrities and glitzy receptions. A quick look at the original 1976 film schedule (displayed above) reveals that parties were not only a part of Marshall’s original vision, they were a main attraction: “Every night a gala . . .”

I recently looked up Marshall and asked what he sees as the biggest difference between the earnest festival he co-founded and the massive enterprise that TIFF has become. He told me flatly, “We get the films we want now.” Back in 1976, Hollywood wouldn’t give Toronto the time of day, routinely refusing to premiere films here or at any other Canadian venue. TIFF has since helped put that attitude to rest. The festival, Marshall explained, is “an event that draws attention to Canada as a foreign country, not part of the ‘domestic’ United States market.”

September is festival season in Toronto, but TIFF’s focus on celebrity now endures throughout the calendar year. The Bell Lightbox regularly hosts film-friendly exhibitions, such as In Love with the Stars (which opens today and runs through next April) and Andy Warhol: Stars of the Silver Screen (which runs from late October through January). In the former, celebrity snapshots and scrapbooks provide “a whimsical look at our obsession with celebrity and the creativity that this obsession inspires”; the latter spotlights a famous artist’s response to similar passions. There’s a postmodern, self-referential quality to these exhibits. In a tongue-in-cheek kind of way, TIFF’s curators are nodding to the fact that Canada is not only a part of the celebrity culture that we Canadians love to bemoan, but it is in fact actively shaping it.

Does this make the Toronto International Film Festival frivolous? Maybe. But it is frivolities such as the offered celebrity “soirées” that help fund artistic projects that might otherwise struggle to find backers. In this way, Handling, who started working at the festival in 1987, has helped make TIFF the self-sustaining beast it is today. Independent Canadian films, which otherwise would get little exposure even in our own country, are being exposed to distributors from places like London, New York, Los Angeles, and Beijing thanks to TIFF’s clout and global reputation. “We establish footholds for Canadian artists in those cities,” is how TIFF’s CEO and director puts it to me. “We help independent artists develop professionally—we open doors for them.”

TIFF is no longer selling a Festival Pass at $6 a pop, as it did in 1976. But it still continues to bring the artistic vision of ambitious artists onto big screens—along with the pomp and circumstance that comes with hosting the film’s world shiniest stars for ten days in September. Put another way: Toronto is still a small festival at heart. It’s the pictures that got big.