A Canadian Beaver in Chile | The Walrus
Skip to content 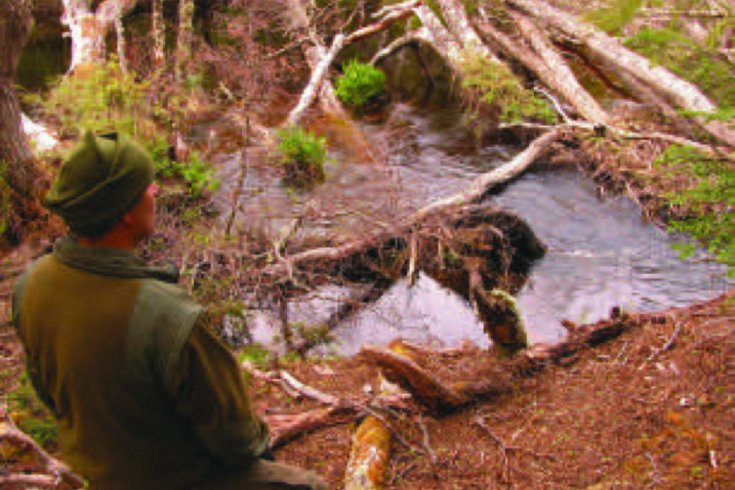 Patagonia—On a crisp spring morning, park ranger Ricardo Cid is leading me toward a stream in the Laguna Parrillar National Reserve. At the southern tip of mainland Chile, fifty kilometres south of the city of Punta Arenas, nearby Lake Parrillar is the glimmering centrepiece of this 180-square-kilometre park. The lake is flanked by snowcapped mountains, marshes, and dense woods. Deep in these woods, rangers uncovered a threat to southern Chile’s ecosystem last year: six very large beavers, the descendants of rodents brought here decades ago from Canada. “It’s our worst fear,” Cid tells me. “Six may not be a big number, but they are like canaries in a mineshaft.”

Beavers aren’t native to South America. Sixty years ago, breeders imported twenty-five male-female pairs from Canada to the Argentine side of Tierra del Fuego island with the idea of raising them for fur. The beavers were freed into the wild and, unfettered by nat­ural predators, began reproducing. Soon they were swimming across the Beagle Channel and colonizing other islands. There are now an estimated 100,000 beavers in Tierra del Fuego, including 61,000 on Chile’s islands in the region. Until recently, they remained offshore, separated by the Strait of Magellan.

Cid and I reach the mouth of the stream and follow it into the woods, arriving forty-five minutes later at an area of devastated forest. “See that,” he says, pointing to a cemetery of rotten stumps and broken branches bearing telltale tooth marks. “They’re like little rats gnawing away at the trunks.”

He takes me to a dam. The long mesh of twisted branches has pooled water to the right, leaving the riverbanks mushy. The erosion has uprooted a dozen twenty-metre trees, their naked roots jutting out from the banks, their toppled trunks adding to the dam. “For now, the impact is moderate,” says Cid. “But in the future, if the population grows, it would be a disaster.” A government study published seven years ago found that more than eighty square kilometres of Chilean land in Tierra del Fuego had been damaged, and the figure has no doubt increased since then. Cid says the beavers also displace local wildlife such as river otters; he fears the lake’s trout, which attract sport-fishing tourism, could be next.

Beavers are a bigger problem for forests in Chile than in Canada, where trees used to build dams can be replenished in as little as fifteen years. Here, amid southern Chile’s prehistoric-looking landscapes, trees sometimes take as long as 250 years to reach full height. The Chilean beavers are larger than Canadian ones, too, measuring up to a metre long and weighing up to thirty kilograms. Government projections suggest their numbers will almost double over the next decade. “Without natural predators, beavers have reproduced quickly, and we see their arrival on the mainland as a serious threat,” explains Nicolas Soto, who works with Chile’s Agriculture and Livestock Service.

Other countries have tried in the past to limit damage caused by foreign species, with New Zealand offering perhaps the most prominent example. Starting in 1769 with the Norway rat, intro­duced by Captain James Cook, fifty-eight mammal and 125 bird species were introduced to the islands. The possum was the biggest problem, reproducing at a rate of 600 per square kilometre. Between 1837 and the 1970s, they were blamed for the destruction of more than 300,000 square kilometres of forest. New Zealand initiated a hunting campaign in 1946 that saw a million possums killed.

The Chilean government started to fight back last year with a three-year, $870,000 program to control “invader” species. The goal is to trap 15,000 beavers by paying bounties (beavers tails fetch $5) and encouraging trappers to sell pelts to foreign markets (beaver skins go for around $10). The project actually targets five invader species, although the beaver is enemy number one. Also on the list is the North American mink, which, like the beaver, was imported from Canada for its fur. The carnivorous minks have colonized Navarino Island, where they threaten native river fish, as well as three rare bird species.

Chile has trained more than fifty trappers, and imported 500 “humanitarian” traps from Canada. Francisco Ros, who coordinates the accredited trappers on Tierra del Fuego island, says restaurants there have developed an “interesting” cuisine using beaver meat, while local artisans are working with beaver pelts. “The rationale was: we have an opportunity to make an industry out of this, an industry that will solve our problem,” says Soto.

The program’s conservationist focus has helped it ward off critics, including animal-rights groups. “It’s a controversial issue for us,” says César Sánchez, coordinator for Animal Attitude. “We defend the right to life of these beavers. But at the same time, most of us are environmental biologists so we understand their impact on the environment. We are forced to accept this program.”

Sánchez says alternatives such as castration and contraceptives have been tried in other countries, but Chile doesn’t have the money or biological expertise to pursue them. Invasive-species control was included in the Convention on Biological Diversity, signed by the international community during the Earth Summit in Rio de Janeiro in 1992, but it is still an emerging disci­pline within conservation biology. Chile is one of the few nations with a comprehensive program.

The rangers at Laguna Parrillar have already caught four of the six beavers they discovered last fall, but the other two remain at large. With only four employees, it won’t be easy to foil the clever invaders. “We made a hole in their dam of about forty centimetres to see if they’d fix it,” Cid says. “We came every day to observe. On the fifth day, surprise! The dam was repaired and we never even saw them.”