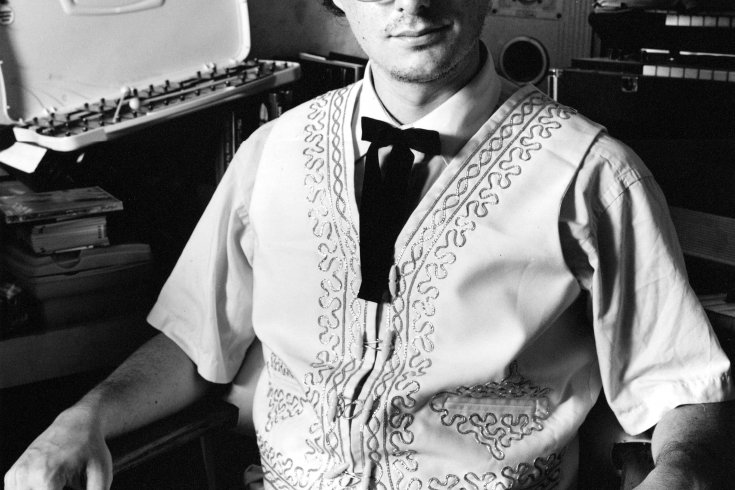 “Rap is always about: Where am I from? What’s my crew? Who are my peeps?,” Josh Dolgin says. The statement seems odd considering Dolgin, twenty-eight, is a curly haired Jew with a face full of freckles who grew up on the Protestant outskirts of Ottawa, not in the burning ghettos of the Bronx. But his rap credentials are authentic, even though he speaks hip hop’s vernacular with intentional irony. As a teenager, Dolgin played keyboards in a gospel band but he was never entirely comfortable making music about Jesus. When one of the group’s black musicians taught him how to make hip-hop beats in his basement, Dolgin found a genre that allowed him, surprisingly for the first time, to deal musically with his own Jewishness. The first rap he wrote, “The Jew Funk,” was a playful hip-hop take on a Jewish prayer that included the line, “Baruch ata Adonai, Motherfucka!” While intentionally absurd and offensive, the lyrics express the paradox Dolgin still feels in trying to connect with his old-world roots. “I love the Hasidim, I love their music, I love the culture,” he says. “[But] how can I like culture, when culture comes out of boundaries and ghettos and people sticking together and being with their own kind?”

For Dolgin, or Socalled as he is known onstage, combining Jewish and black cultures came naturally, but it was always less of a social statement than a musical one. While he is well read on the two groups’ sometimes tumultuous relationship in the twentieth century—Jews and blacks co-operated during the civil rights movement but fell into disagreement during the 1970s as differences sharpened on both sides—Dolgin doesn’t buy the argument that his music is somehow reuniting a long-lost brethren. ” I don’t know Jews and blacks that are like that,” he says. “I have black friends, I make music with black people. I make music with Jewish people.
It’s music, it’s the universal language, and all that bullshit.” Dolgin’s latest record, this spring’s The Socalled Seder, a hip-hop version of the Passover ceremony featuring one of his heroes, rap group Wu-Tang Clan’s Killah Priest, is no exception: “When I met Killah Priest it wasn’t like, ‘How can we negotiate our Jewish and black identities and our pasts?’ No, it was like, ‘Listen to this.’ ‘Yeah, that’s funky shit.’” The sensibilities he and Killah Priest shared in the studio have historical roots: the slow birth of klezmer music in eastern Europe over the last millennium has some striking parallels with the origins of African-American hip-hop culture on the streets of the South Bronx a quarter century ago.

The exact regional ingredients that congealed into Jewish folk music in the last thousand years are unknown—Hitler’s 1939 march across eastern Europe erased most traces of Jewish culture from that part of the world, making a forensic study of klezmer’s roots virtually impossible. The first klezmer artists (klezmorim) happened upon the music centuries ago to distract themselves from destitution. No one knows for sure where they got their instruments, although some believe they were surplus from the Czarist army. As the klezmorim travelled through eastern Europe absorbing aspects of the musical culture around them—Russian, Romanian, Ukrainian, even Greek—they were viewed by many as unorthodox, morally corrupt street people who sang in lowly Yiddish rather than Hebrew, the lofty language of prayer. Nevertheless, in tiny shtetls across eastern Europe, groups of Jews started picking up instruments and influences of their own, and a musical movement was born.

When Czar Alexander III came to power in Russia in 1881, he enacted a series of anti-Semitic laws that produced an unprecedented period of mass migration. Among the 2.5 million Jews who moved to the United States over the next forty years was Abraham Goldfaden, a formally trained musician who had tried to legitimize Jewish folk culture in Russia by creating a series of shows that combined a relatable Yiddish narrative with traditional Jewish music and humour. Goldfaden was seeking a sophistication not found in the street songs of the klezmorim. In the 1880s, his followers brought Yiddish theatre to New York City, where Jewish performers, such as Joseph Rumshinsky and Boris Thomashefsky, took the genre into the mainstream. The new Jewish music was recorded onto vinyl for the first time in 1905, and its popularity soared.

Over the next two decades, thousands of Yiddish theatre records were produced in the United States. The industry flourished until the Johnson- Reed Immigration Act of 1924 became law, ending open immigration from eastern Europe. Without a constant influx of new fans and musicians who spoke the language, New York’s Yiddish theatre scene began to fade. By the 1940s, the early Yiddish recordings had been largely forgotten amidst the more pressing concern of survival. Although Jewish folk music experienced a resurgence during the late 1970s, when the genre name “klezmer” was first coined, the Yiddish theatre’s popularity never returned to its pre-war level. By the century’s end, a lot of those old Yiddish records had found their way into trash heaps all over North America.

In 1996, Dolgin, then a student at McGill University, was spending much of his time trolling around yard sales and second-hand stores in Montreal looking for albums to sample when he stumbled across some of those old Yiddish records. Dolgin wasn’t really interested in Jewish folk music, but he found to his amazement that the music lent itself perfectly to hip hop. “In every Yiddish theatre song,” he explains, “there’s a little break in the middle between verses where it has this funky little loop, so it was, like, I had to sample it.” Unknowingly, Dolgin had discovered hip-hop klezmer. And his peripatetic record collecting echoed not only his Jewish forebears, but also the first hip-hop artists on the streets of the South Bronx.

When hip hop’s time arrived in the late 1970s, New York’s underclass had endured decades of unfavourable government policy. The Cross-Bronx Expressway, a commuter road linking New Jersey and Long Island, had been constructed in the 1950s. Because the expressway’s path required the demolition of 60,000 homes in one of the city’s poorest neighbourhoods, 170,000 people, many of them black and Hispanic, were forced to relocate. That, combined with dwindling federal funding, reduced the South Bronx to virtual slumhood.

Like the Jews of eastern Europe who picked up instruments, young people in the South Bronx looked for ways to express their frustration, as Tricia Rose documents in her 1994 book on rap music. Instead of fiddles and brass, they found discarded technological tools and started experimenting. “They were reappropriating obsolete technology,” says Dolgin. “Even taking turntables that were thrown out—they were just in the garbage—and turning them into musical instruments.” Record players were transformed into interactive music-making machines, as Grandmaster Flash—one of rap music’s pioneers—developed and perfected the technique of scratching. Samplers, used previously as a substitute for musicians to save time and money during expensive studio sessions, became the favoured instrument in an emerging genre that celebrated the fusion of disparate sounds. “[P]rior to rap,” writes Rose, “the most desirable use of a sample was to mask . . . its origin, to bury its identity. Rap producers have inverted this logic, using samples as a point of reference, as a means by which the process of repetition and recontextualization can be highlighted and privileged.”

For Dolgin, the only real difference between early hip-hop and klezmer artists was the technology available at the time. “I think it’s almost purely historical,” he says. “We had these new technologies of computers and keyboards. Well, people were going to try to make music with them, and the music that came out of it was this thing called hip hop. That’s sort of what was happening in eastern Europe. They were taking the best parts of Ukrainian music and Romanian music and Russian music, and they were sampling it, basically, and looping it and making it their own. Hip hop just lays it bare—you see the cut and hear the cut.”

Dolgin now owns between 4,000 and 5,000 records and finds himself on the vanguard of hip hop’s sampling culture. His merging of hip hop and klezmer has attracted attention from all over the world and has helped him rediscover his Jewish roots, though he is circumspect about his attraction to Judaism: “Why did I have to wait ‘til I found Yiddish before I really found a voice for myself? I was not a singer before, but when I started to hear these Yiddish songs I thought, ‘Oh, now I wanna sing.’ Isn’t that absurd?” At a klezmer workshop in 2000, he so impressed world-renowned clarinet player David Krakauer that he was hired on the spot to write hip-hop beats for Krakauer’s music. Soon after, British violinist Sophie Solomon contacted him to collaborate on an album. The result, 2003’s HipHopKhasene (hip-hop wedding), is a reinvention of the Jewish marriage ceremony. Many of the album’s rap lyrics are about coming to terms with Jewish tradition in modern secular society:

Sure it’s a fucked up institution,
economic solution to socialized
absolution
Hype the hetero norms, it’s just
ancient psychic residuals
But folks are sentimental and they’ll
always need their rituals
Plus as a concept it’s dated, ketubah
outmoded and faded
Power-politicking nepotism cheapest
way to get related.

Peering out from behind his nerdy glasses, Dolgin epitomizes North America’s diasporic makeup. He knows he is lucky to live in a society where he doesn’t have to be marked as a Jew unless he wants to be. The tensions that tug at cultures from both sides—nationalism and racism on one, tradition and belonging on the other—are constant preoccupations, but Dolgin never lets himself lose sight of the music. His next album, tentatively called Ghettoblaster, will deal with the idea of blasting out of all kinds of ghettos, including the one the industry places him in by pigeonholing his records as Jewish music.

In the meantime, Dolgin will continue collecting and mixing together fragments from wherever he finds them. Only now he can do it on a much larger scale: “I can go to Los Angeles and record gospel singers singing this Yiddish song that I got them to write words for. Then I go to Montreal and get my southern Indian drumming friend to play the drums, and then I get David Krakauer to play a Jewish solo, and then I go to the studio and edit it all together. They’re all playing together, and they’re making one song. You know what I mean?”