You and Whose Army? | The Walrus
Skip to content 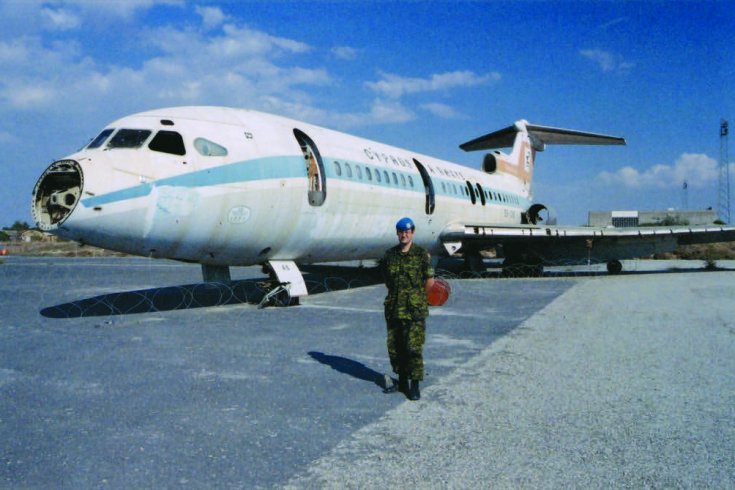 Captain Dan Zegarac poses by a Cypress Airways jet stranded on the tarmac at Nicosia International Airport, which Canadian soldiers defended from the Turkish army in 1974. / Photo by Chris Koentges

nicosia—Sector 2, in the middle of Cyprus’s 180-kilometre-long buffer zone, is what they call the “tricky” sector. It cuts through the capital city’s booby-trapped heart, separating—by mere feet in places—Greek Cypriot from Turkish Cypriot soldiers. After forty-five years of post-independence strife, forty-one of them overseen by UN peacekeepers, these two armies have become bored and undisciplined, and they are forever trying to one-up each other by advancing their ceasefire lines, inches at a time, without getting caught. This game often escalates into a small violation of UN rules (lobbing a rock at the other side will do it), which can build to a serious incident (firing back a round), which results in the odd casualty, which, if not managed just right, can erupt into an international crisis.

There are many curious things about the Cyprus buffer zone: it shares its unofficial name, the Green Line, with the border between Israel and Palestine; it is home to a fleet of some fifty brand-new 1974 Toyota Corollas, trapped by circumstance and now frozen in time, in a dealer’s garage; and a pungent scent of eucalyptus, from moisture-sucking trees first planted in the arid desert terrain by British colonial administrators in the 1950s, hangs over the crumble. Maybe most curious of all, though, is the Canadian contingent. I am riding up front with him in a white Mazda 626.

After thirty-nine years, more than 25,000 troops, and twenty-eight fatalities, the mission known as Op Snowgoose has come down to this: a thirty-five year-old, steady-as-she-goes Montreal Canadiens fan, born in Ottawa and raised all over Canada. Beneath his blue UN beret, his glasses conjure up Clark Kent. But it’s not just the glasses: Captain Dan Zegarac emits such mild-mannered competence that he preempts whatever “me, myself, and I” joke you might make at his mission’s expense.

We pass Nicosia International Airport, which the airlines abandoned in 1974 after an attack by the Turkish army. A Cyprus Airways jet sits on the tarmac, still fit enough to make a getaway in were it not for its shrapnel-pocked tail. Zegarac is explaining his objective in Cyprus, arguably the most famous peacekeeping mission in Canadian history. “We’re here to maintain the status quo,” he says. Yes, he says we.

There is something inescapably absurd about this mission. It smacks of an underfunded military’s tokenism. When UN Secretary-General Kofi Annan visited Prime Minister Paul Martin in March 2004, he hinted that Canada was coasting on its reputation, and referred specifically to our commitment here. Cyprus was once a point of pride for Canadians. Now, not so much.

Or maybe, not so obviously. As we pass a derelict petrol station, Zegarac struggles to convey the meaning of his mission: “The cost of maintaining a single Canadian—it’s a non-issue. Our Canadian presence here—we have a Canadian flag . . .” He cuts himself off, then tries again. “When the problem is finally resolved, we will have participated fully from the start to the finish in the solution in Cyprus.”

This is Zegarac’s second tour in Nicosia. In 1993, he was part of the battalion that ceded control of the buffer zone’s central region—now part of tricky Sector 2—to the British after two decades of nurturing. They left behind only a handful of personnel on the island, who eventually gave way to a single soldier, who became Zegarac in July 2003.

It’s difficult to overstate the effect Canada has had on Cyprus since our troops first arrived in 1964. Cypriots speak matter-of-factly of little towns in Saskatchewan, and Canadians are revered, by Greek Cypriots in particular, for defending the airport from the advancing Turks in 1974, when the conflict was at its apex and the Green Line was just a chinagraph pencil stroke on a map.

Journalists aren’t allowed inside the Green Line, but because the British officer in charge, Captain James Holland, admires our military’s old-school peacekeeping style, I was able to get a tour. We marched along a narrow patrol path, past wrecked Ottoman mansions bound by several decades’ worth of overlapping razor wire, sandbags, and wriggly tin fence. As we walked, he recounted a story about the Canadian approach to the game of inches. “A Canadian commander came down here in his armoured vehicle, same route they used to take every morning,” he said, indicating a very narrow road between the Greek Cypriot and Turkish Cypriot positions. “However, on this morning his driver crashed into the side of this Turkish bunker. He gave the driver a good bollocking, then he looked out and realized they were butted up along his side of the vehicle as well.” The vehicle was wider than the passage. The Turkish bunker had been extended a few inches that night—a fact the Turks vigorously contested. Eventually, the Canadian asked everyone to get out of the bunker. He backed the armoured vehicle up several feet, plowed through the illegal extension, and continued on his patrol. Status quo maintained.

Sector 2 teems with such lore. Hometown names of departing troops, from Cape Breton to Prince Rupert, are etched into the sandstone along patrol routes named Rogers Pass (echoing a scenic point on the Trans-Canada Highway) and Patricia’s Way (after Princess Patricia’s Canadian Light Infantry). There’s a derelict school called Beaver Lodge and a barracks named Maple House. Zegarac grimaces whenever the Slovak peacekeepers who patrol Sector 4 refer to “Camp Burger,” the troop house named after Jean Claude Berger, a twenty- one-year-old private from Rimouski, Quebec, who was one of two Canadian soldiers killed in combat in 1974.

Soldiers stationed in Cyprus often refer to the experience as “peacekeeping at its lowest level,” and indeed Zegarac spends much of his time charting patterns in the low-level game of inches. “Every week there’s easily a few hundred violations that occur,” he says. “Each one of them has to be recorded, and if there’s a pattern being established, then we see if this is something deliberate.” The solution may not be ramming an armoured car through bunker walls, but a Canadian will be there to improvise a fix. The status quo will be maintained. The mission will go on.