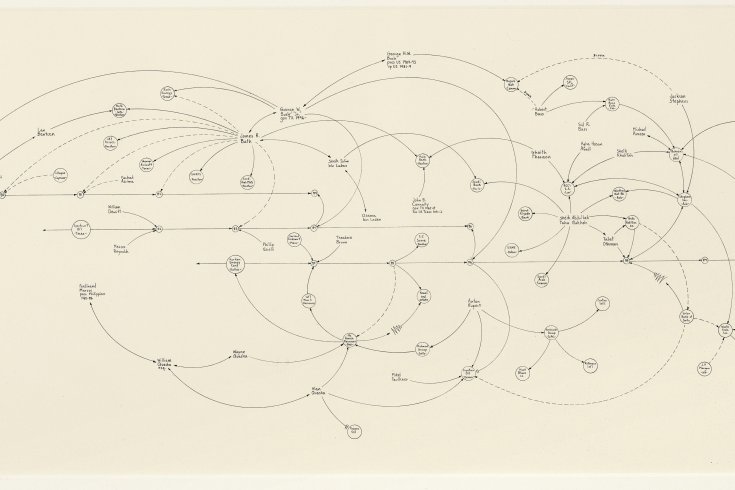 New York-based visual artist Mark Lombardi spent his career tracing the intricate international webs that link world leaders and financial institutions with arms dealers, drug lords, and bagmen. Lombardi, who committed suicide at age forty-eight, eighteen months before 9/11, invented his own index card system for collecting thousands of facts from government publications, newspapers, TV, and the Internet. He would then reorganize these mountains of information into easily navigable, hand-drawn diagrams.

One such diagram outlined how Pope Paul VI and Sicilian financiers illegally divested millions of dollars worth of Vatican assets so that the Church could avoid filing tax returns. Another connected Ronald Reagan, George H. W. Bush, and Margaret Thatcher with arms sales to Iraq. In 1999, Lombardi blocked out his most prescient schemata: a chronicle of Bush and bin Laden family connections.

Bush Jr. became ceo of Spectrum 7 and received 1.1 million shares in the company. Even though Spectrum 7 was cash-strapped, it was bought by Harken Energy Corp. and Bush became a board member, receiving $600,000 and over $2 million in stock options (all funds in US currency).

Harken, too, was in serious debt, but investment banker Jackson Stephens, whose family owns one of the largest brokerage firms in America, managed to engineer a $25-million stock purchase. That deal also included the board appointment of Sheikh Abdullah Taha Bakhsh, a Saudi investor with connections to bcci, the Karachi-based bank that was exposed as a front for drug smuggling and money laundering. Even though Harken had never drilled offshore, the company was awarded offshore drilling rights in oil-rich Bahrain.

In August 1990, Saddam Hussein invaded Kuwait and Harken’s stocks plummeted by 40 percent. Two weeks before the invasion, Bush had sold close to a million dollars worth of Harken shares at three times their original value. Bush was a member of the company’s audit committee prior to the sale of his stocks, and while he was suspected of insider trading, charges were never laid.

Curator Robert Hobbs, of Independent Curators International in New York, credits Lombardi’s “narrative structures” with being the first art to represent how nationalism has been superseded by globalism.