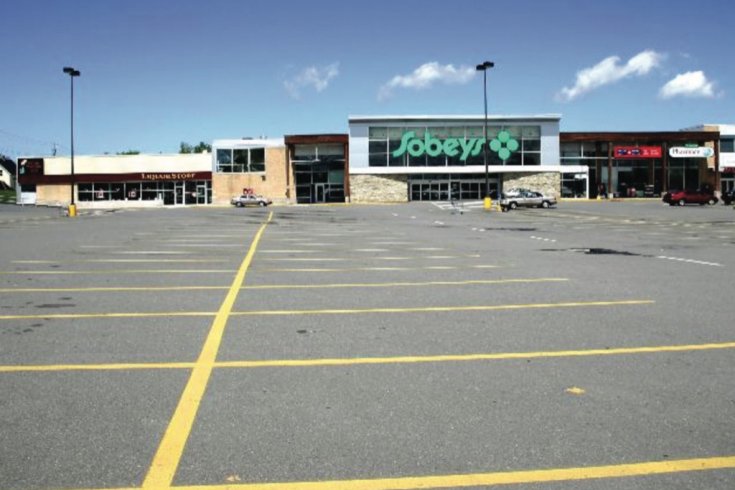 The Sobeys in New Glasgow, Nova Scotia, is only one of the area's grocery superstores. Photograph by Anna Fraser

new glasgow—Pictou County is in the part of Nova Scotia bordered to the north by the Northumberland Strait. Here, my ancestors, among others, spent centuries trying to farm the same rocky plots of land they first settled in the eighteenth century. It’s not an area one normally associates with basil pesto, organic yogurt, or out-of-season vine-ripened tomatoes, and yet here I am tossing these and other items into my shopping cart at the local supermarket. In the past few years it has suddenly become possible to purchase prosciutto in a community where many had never before heard of it.

After I got back to Toronto, I discovered the reason for the unusual variety of groceries now available in Pictou County: the residents are enjoying the benefits of an ongoing grocery-store war. The players are two chains that for decades had largely kept to their own turf.

One is Canada’s largest food distributor, Ontario-based Loblaw Companies Limited (which also operates Atlantic SaveEasy, Atlantic Superstore, Cash & Carry, Extra Foods, Fortinos, Your Independent Grocer, Lucky Dollar Foods, Maxi, No Frills, Provigo, The Real Canadian Superstore, Shop Easy Foods, Super Valu, Valumart, and Zehrs Markets); the other is Sobeys, a family business that opened its first meat-delivery business in 1907 and its first shop, in 1912, on Foord Street, the main drag of Stellarton, in Pictou County. The Sobey family represents a major local success in the county’s New Glasgow metropolitan area (population 45,000) and, over the years, it has made conspicuous contributions to locally popular institutions, such as the Aberdeen Hospital.

There is a history to the Loblaws-Sobeys rivalry. In 1960, the late Frank Sobey hit on a clever ploy to protect his still-small chain from a buyout by the owners of Loblaws: he sold the Ontario-based giant a 40-percent stake in his company, along with first rights to purchase the chain for almost $1 million. At the same time, he set up a family trust that made a hostile takeover virtually impossible. He then used Loblaws money – almost $1 million was a still a sizeable fortune forty-four years ago – to bootstrap the growth of his own grocery empire.

While Loblaws dominated the market across the rest of Canada, Sobeys was the major distributor in the Maritimes. For years, the only structure in New Glasgow more conspicuous than Sobeys’ regional offices beside the Trans-Canada Highway was the bright blue mine head of the notorious Westray coal operation, where twenty-six miners died in an underground explosion in 1992.

Loblaws’ local presence, meanwhile, was restricted to a slightly shabby Super Valu, which hardly put a dent in Sobeys’ loyal customer base.

The mutual hands-off approach ended in 1998, when Sobeys Inc. purchased the Oshawa Group, which operates IGA stores among others, making a major move on Loblaw Company Limited’s Ontario home base. Within a year, Loblaws had opened an Atlantic Warehouse Superstore in New Glasgow, a mere kilometre from Sobeys’ head office. Sobeys’ next move was to give its five Pictou County outlets a quick makeover, but the opening of the Superstore irrevocably changed Pictou County’s grocery landscape. The Superstore’s great selection of foodstuffs, combined with such frills as a staff nutritionist, a full-time natural foods manager, and a community room with free soft drinks, succeeded in swaying locals from their lifelong loyalty to Sobeys. And suddenly, between the rivalry of the two chains, it was possible to purchase aged balsamic vinegar and sundried tomatoes at multiple locations.

Loblaws’ chair and CEO, Galen Weston, is Canada’s second-richest citizen (after media baron Kenneth Thomson) and the Weston family ranks an impressive forty-third worldwide. The Sobey family isn’t quite in the same league, but still maintains a respectable fortune, which is ranked at thirty-fourth nationally, with more than 1,300 stores (including IGA and Price Chopper outlets) either owned or franchised across Canada. And it’s not about to back down.

But it’s impressive nonetheless – an Aladdin’s cave of culinary wonders with a three-tiered seafood tank swarming with three sizes of lobsters, two varieties of crab, and an impressive selection of bivalves, along with sale prices and other enticements throughout the store. And, in March, Sobeys opened a new supermarket in Toronto.

Sobeys also may be trying harder, with a level of service that is almost unprecedented in this age of the impersonal mega-mart. In Toronto, when I had a minor problem with a deli counter pizza (feta on a plain cheese pie: not popular with my four-year-old), the store manager from Sobeys’ Metro Market personally delivered a replacement to my home. With any luck, Loblaws will follow Sobeys’ lead on customer service. It makes one long for a retail war in every sector.