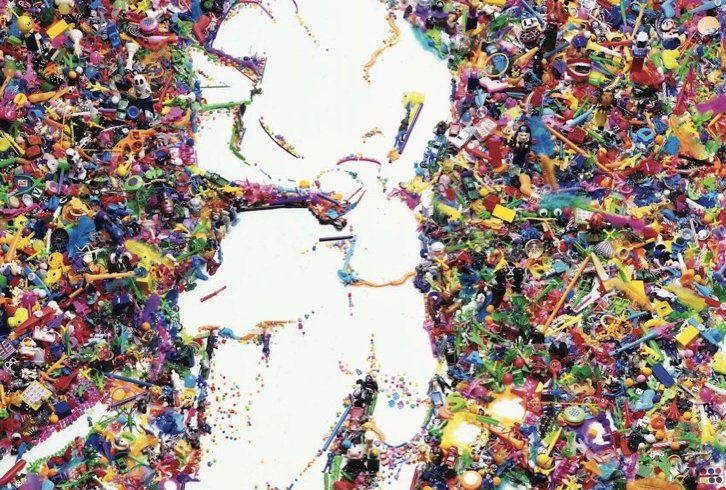 “I make recognizable images using unexpected materials. This portrait of Alice Liddell (the girl who inspired Lewis Caroll’s Alice in Wonderland) is made up of toys — which help us mediate our inability to understand the real world when we’re very young. I used seven to eight thousand toys to make the image. The toys here are miniatures of things that actually exist: instruments, vehicles, soldiers, telephones, money, and animals. You can tell a lot about a society by its toys.

“Sometimes I choose the materials, but sometimes they choose me — if there is jelly or peanut butter or leftover spaghetti around, I just do something with it; I create a Mona Lisa in it. By adding a touch of strangeness — a gimmick — you create a sort of perceptual short circuit that forces the viewer to reconsider that image.

“Early in my work I was using wire to make line drawings; later, I wanted to get more complex. I made portraits in sugar of the children of cane plantation workers, and from sugar I discovered chocolate because I became interested in taste. Then I worked with soil and diamonds. Each material has complex layers of meaning. When you look at chocolate, for example, you’re looking at an entire spectrum of associations, from the romantic to the scatological.

“Clouds are a recurring element in my work. When you look at them, you always imagine they are something else. Clouds in the sky are always morphing, but a drawing of a cloud is something fixed. I wanted to play with that tension. For ‘Cloud Cloud,’ I had an airplane draw a cloud over New York City, and it was so funny. People see a plane drawing and they think it’s going to create a meaningful message. But the plane would just draw a cloud and then go — leaving a representation of a cloud in the sky.

“A documentary was recently made about me called The Worst Possible Illusion. It’s true — I’m not really trying to fool anyone. You don’t feel fooled, but you want to be fooled, or, perhaps, need to be fooled.

“As a young man, my father was what’s called a malandro in Brazil — basically a con artist. When I was twenty-two and left a good job in Brazil to move to the States and become an artist, he stopped talking to me. But I went back for a show of my work years later, and he came. He asked, ‘How much do they pay you to do this?’ I pointed and said, ‘That sold for three thousand dollars.’ He said ‘What? Why?’ But he was proud of me. He thought I was a con man, too.”