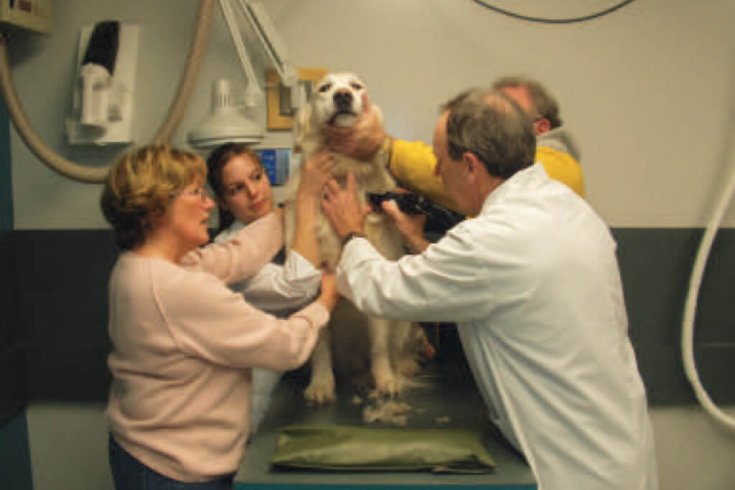 At Canada’s only blood bank for dogs, Molson Webb (centre) does his civic duty / Photograph by Jake MacDonald

winnipeg—With his broad shoulders, thick blond hair, and jaunty amble, Molson Webb looks as if he must have been quite an athlete in his day. Although he’s well past middle age, he still enjoys the life of the seasoned boulevardier, making the rounds of his neighbourhood, chasing squirrels, and urinating on an occasional tree. Every three months, Molson squares his shoulders and heads down to the clinic, where he donates four hundred and fifty millilitres of his private stock to those less fortunate than he.

Molson is a nine-year-old Golden Retriever, and he’s a regular contributor to Canada’s only blood bank for dogs. Located in a basement laboratory at Red River College in Winnipeg, the Canadian Animal Blood Bank was started seven years ago by a veterinarian named Ken Mould. It’s a non-profit organization, staffed by volunteers, with the goal of providing red blood cells and plasma for dogs faced with life-threatening emergencies. “We were just a local organization when we started,” says Dr. Mould. “But now we ship blood products to veterinary hospitals all across Canada.”

His salt-and-pepper hair, trim moustache, and white lab coat make Dr. Mould look every inch the kindly veterinarian. He is assisted by a small team of students, and when Diane Webb leads Molson into the lab, the big dog seems pleased to see his old friends. The students take a blood sample from his leg, making sure his hemoglobin and protein levels are high enough to allow him to give blood. Scratching Molson behind the ears, Dr. Mould says, “When we started, we were worried the dogs would be reluctant to return after their first visit. But as you can see, he’s not the least bit concerned. Dogs fear the unknown, and he knows we’re not going to hurt him.”

There are about sixty-five million pet dogs in North America, and owners are spending a lot these days to keep them happy. Acupuncture, herbal medicines, and massage treatments have all become perks of a privileged dog’s life. Divorcing couples are waging nasty courtroom battles over custody of the family pet. Family therapists say that pets increasingly occupy the social niche once filled only by children. “I definitely regard Molson as a member of our family,” says Diane Webb. “We give him gift-wrapped presents, and he’s got a pair of goggles for hanging his head out the window of the car. But we still expect him to fulfill his social duties. I don’t think he enjoys giving blood, but I tell him, ‘It’s your turn to be a canine good citizen.’”

Like many of the volunteers, Diane found out about the blood bank through its advertising campaign: “We were at a dog picnic and they had a table set up.” To give blood, dogs have to be healthy, weigh at least twenty-three kilograms (fifty-one pounds), and be “even-tempered,” which fairly describes Molson. Wagging his tail and sniffing at a slender female Retriever named Chelsea, who doesn’t seem to like him much, he saunters into the examining room and gets hefted onto the table.

As the volunteers hold Molson steady, Dr. Mould shaves a patch of fur from his neck. Then Molson lies down and the doctor slips a needle into his jugular vein. Wine-coloured venous blood spurts into the plastic tube and runs down into a plastic bag, assisted by a thumping vacuum pump.

“He’s perfectly calm,” says Dr. Mould. “But most dogs don’t like to lie still very long, so we try to finish up in three minutes.”

The blood is shipped by courier and sold at cost, about $115 per unit (450 ml), to veterinary hospitals across Canada. The blood bank sold eight hundred units in 2003, a number that’s rising by two hundred units per year. “Surgeons are getting better at operating without loss of blood,” says Dr. Mould. “But vets are doing more complex operations now, like hip replacements, so there’s actually a growing demand for our products.”

The demand may also be influenced by the fact that dog owners nowadays are more willing to fork over serious money for medical procedures. One study indicates that expenditures on veterinary treatments for dogs have doubled in the last ten years.

Once his blood is in the bag, Molson hops down and gets his rewards – a doggy biscuit and a handsome red neckerchief. Like other donor dogs, he also gets a guarantee of free blood transfusions for life. “We’ll separate his red blood cells from the plasma,” says the doctor. “The plasma can be frozen and kept for two to three years. But the red blood cells are only viable for thirty-four days, so it’s a constant challenge to maintain a list of faithful donors.”

“Molson has given blood twenty times now,” says Diane Webb, patting his head. “I know it seems that I spoil him a bit, but he’s done more for me than I’ve ever done for him.” 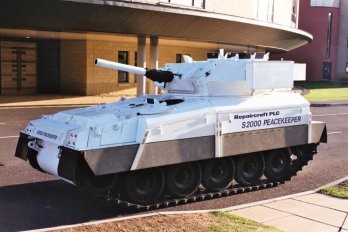