The Millefeuille Industrial Complex | The Walrus
Skip to content 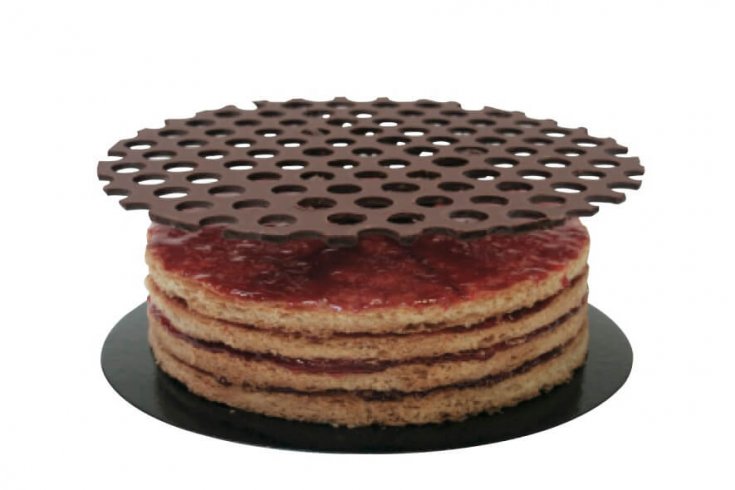 A sweet homage to the architectural principles of the French designer Jean Prouvé, constructed by chef Stéphane Marchal and industrial designer Stéphane Bureaux

It was late on a January day in Nancy, at one of the best pastry shops in France, where a chef and an industrial designer were carefully slicing into a cake. The chef, Stéphane Marchal, had worked through the night to finish the shop’s daily complement of tarts, pastries, and petits fours so he could devote the afternoon to this delicately constructed dessert. His collaborator, Stéphane Bureaux, an industrial designer, had provided the blueprint, still taped to a cupboard door nearby, for the cake’s complex construction.

The bulk of it consisted of impossibly thin millefeuille wafers. The exterior was coated with a translucent varnish of ruby-red raspberry jam. A dark chocolate cylinder ran through the core, emerging from the roof as an upside-down tripod, which, in turn, supported a frail disk of perforated chocolate. On the cake’s surface, dotted lines, like those on a seamstress’s pattern, showed where it should be cut.

Marchal’s and Bureaux’s tiny, detailed model was a sweet homage to the architectural principles of twentieth-century French designer Jean Prouvé, to mark the twentieth anniversary of his death, on March 23. Anyone who was familiar with Prouvé’s work would have recognized his influence in the chocolate disk floating above the structure, which recalled the industrial-hole patterns in Prouvé’s furniture and prefab sheet-metal homes.

As a feat of architectural engineering, it was superb. The only question remaining was: How would it taste? Bureaux chewed slowly, eyes staring off into the horizon. Then he grimaced.

“Too dry,” he said. “C’est de la merde.” They pushed the cake aside. It was back to the drawing board for both Stéphanes.

Linking architecture to pastry might seem far-fetched to most of us. But the relationship can be traced back to the seventeenth century. By the early nineteenth century, chef Marie-Antonin Carême, the great codifier of pastry technique, could claim, “The fine arts are five in number: painting, sculpture, poetry, music, and architecture – whose main branch is confection.” Since Carême, however, the relationship has mostly been one-sided: frothily decorated buildings are sometimes called wedding-cake structures, but until now, no one had thought of creating a Frank Gehry-inspired almond dacquoise. A new generation of French pastry chefs – including Marchal, Philippe Conticini, Sébastien Gaudard – are collaborating with designers and architects to rethink the very form of desserts.

“Pastry is the closest thing to architecture in the food world,” says Paris-based sculptor and food artist Marc Brétillot. “It’s all about construction.” A pioneer in the food/design crossover, he has also worked with the industrial designer Stéphane Bureaux. Three years ago he founded the culinary-design program at the École supérieure d’art et de design in Reims. Brétillot’s projects have included performance-art pieces involving live music and chain-reaction machines, inspired by Rube Goldberg, that open and serve individual bottles of champagne and squirt dollops of icing onto cookies. For the French chocolate manufacturer Valhrona, Brétillot designed a dessert featuring a block of dark chocolate that was repeatedly heated, blown like glass, turned over, and then cooled until piano-leg stalactites formed. Brétillot served the sculpture in a shallow dish of scalding hot linden tea, into which the chocolate structure eventually collapsed and melted.

More than simply an exercise in form, however, the trend pays serious attention to function, which is to say, how a piece actually tastes – something that cannot be said of Carême’s nine-teenth-century banquet cakes. Carême called them pièces montées and built them according to his meticulous sketches and blueprints. Meant to represent monumental villas, Gothic pavilions, and Greek temples, his creations were made with ingredients such as marzipan, lard, nougat, pastillage, spun sugar, and pastry dough. The results were structurally sound, but they were designed primarily as display pieces that romanced the eye, not the tongue.

Pastry chefs today want to have their cake and have it eaten, too. When the pastry chef Sébastien Gaudard created a cake called the “Auguste” for the high-end Paris food emporium Fauchon, he based his approach on field research. “The first thing I noticed was people tend to buy little cakes rather than big ones,” he said. So Gaudard designed a cake in the form of a five-part jigsaw puzzle; each piece was a separate portion. Then he varied the sizes, shapes, and textures of the components – long, square, crunchy, liquid—and observed how people ate them. “I noticed that people always begin by biting into the corners, so I decided that my cake had to have exaggerated corners, hence a triangular shape. It also has height – each puzzle cake is shaped like a little rounded hill.” Each puzzle piece also had its own flavour, and the flavour of each grew in intensity as you approached the centre. “If the flavour is tea,” Gaudard explained, “there’s more and more tea with each bite as the cake becomes taller. I wanted the ratio of tea to chocolate to vary throughout the cake, so the form of the cake has an impact on the way it tastes.”

In other words, the “Auguste” is not just a cool object: the design is intimately married to the taste. Fittingly, its elegant, spare decoration consists of small pictograms representing each of the key ingredients – a sour cherry, a tea leaf, a peppercorn – “etched” into the velvety surface of the cake. Gone are the gratuitous maraschino cherries and sugar flowers of old; there is coherence between interior and exterior. And Gaudard’s concepts of corners and individual puzzle pieces respond to the physical act of eating and the sociology of sharing food.

Stéphane Bureaux believes that good design can amplify the social dimension of food. “When I design a cake, I think about how it will be constructed, but also how it will be deconstructed at the table, and how serving it and eating it can actively involve people.” Part of the intrigue of his Jean Prouvé cake comes from the floating, perforated chocolate roof. Do you cut into it along with the rest of the cake? Do you break it up and hand it around? The guessing game is part of the shared experience.

“I always start with the tastes and textures I want in a dessert and the design naturally follows,” said pastry chef Philippe Conticini. “It’s never the other way around.” Conticini likes to talk of an “architecture of taste,” a phrase he coined to describe the vertically layered desserts he serves in cocktail glasses. Last year, he collaborated with Philippe Chiambaretta, a designer who worked on the new Shiseido building in Tokyo, on the remake of a dessert classic, the bûche de Noël, or Yule log. Their “Bûche B” was a high-tech-fantasy version of the traditional chocolate sponge roll.

“Philippe wanted to do a bûche with different textures mixed together – crunchy, soft, and liquid—so we had to design a self-contained cake that would keep the liquid part from running all over the place,” said Chiambaretta. “I wanted the cake to have a manufactured quality, so I began to think about things that you eat that come in standardized, industrial shapes. I hit on the idea of medicine, and began working with the idea of capsules.”

Chiambaretta designed the shape using 3ds max, a three-dimensional design program. A machine-cut resin cast was used to make plastic, capsule-shaped moulds for a cake containing white chocolate mousse and apricot-and-basil chutney in a sleek capsule of white chocolate; the “Bûche B” is quite possibly one of the most aerodynamic desserts yet conceived. It is also reported to be delicious.

That quality, alas, was the missing ingredient in Stéphane Marchal’s kitchen, where the Jean Prouvé cake sat forlornly on the counter, beautiful but dry. A mousse filling would make it more moist, but Marchal thought it would be too ordinary and Bureaux feared it would make for a soggy interior. Bureaux mused about replacing the millefeuille with layers of Belgian waffles, an idea that Marchal dismissed out of hand. The afternoon work session was starting to look like a flop, when Bureaux suddenly hit on an idea. “We’ll drill holes into the cake and fill them with crème anglaise,” he said. Marchal nodded; he suggested raspberry- or vanilla-flavoured custard sauce. “We’ll drill the holes into each piece of cake,” enthused Bureaux, “and if people follow the dotted lines on top of the cake, they won’t cut into the holes, so the custard won’t run. It’ll be like a little surprise when you bite into the cake.”

There was a moment of subdued elation. Bureaux and Marchal still had to create a tripod mould, figure out a hole-punching system for the perforations, test Bureaux’s drilling idea, and settle on the crème anglaise flavour, but the conceptual part, at least, was done. The rest—with any luck—would be a piece of cake.