My three-year-old son is walking down the street talking a blue streak, something about a cement mixer full of ice cream, and a hungry dog pushing a wheelbarrow. Seems harmless enough, except that with his head craned sideways at me (he still thinks eye contact ensures you have someone’s ear—how sweet), he walks into a telephone pole. Thrown backwards, he rubs his skull and frowns, then fights off tears. As I offer the required condolences, I make no effort to hide my amusement. Such little cruelties are necessary to keep the boy off balance; his burgeoning vocabulary has made him a little too self-possessed for my liking.

One of his earliest sentences was shouted from his crib in the middle of the night: “I want more meat!” I found him standing white knuckled at the railing, eyes narrowed at my sluggish response time. “More meat,” he said. I nodded and turned toward the kitchen. He wasn’t yet two then, and I was awed by his new-found ability: not only was he coupling coherent words together, but they were freighted with meaning! I’ve since become less giddy.

Defining slang in an Ottawa court 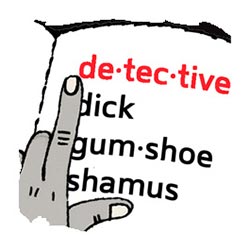 In 2010, researchers at Harvard and Google reported that the English lexicon was growing by some 8,500 new words each year. Over half of the million-plus words in circulation consist of lexical “dark matter,” trendy slang deemed too transient for formal classification. When Detective Carolyn Botting turned to the user-generated Urban Dictionary to inform her testimony in an ongoing human trafficking case in Ottawa, defence lawyer Trevor Brown scoffed at the website’s unscientific nature, pointing out that entries had been submitted by such contributors as SirMonkeybutt10. Whatevs, responds the site’s founder, Aaron Peckham. “The real authority on language and the meaning comes from people who speak the language,” he told the New York Times. “The whole point of Urban Dictionary is we are defining our own language as we speak it.”

After lunch recently, he started pushing his plate toward the edge of the table, moving it slowly enough that I wouldn’t miss the defiance. Looking at the floor where the plate was about to bounce and splatter ketchup, he said, “Take this, somebody.” He watched me snag the plate in time, then he leaned back, waited a beat, and flicked his nose at me: “Book on couch.” I can accept that a higher civility is still beyond his grasp—Good sir, in the wake of this fine meal, would you be so kind as to regale me in the solarium?—but does he have to be so bossy?

I miss the gibberish, and not just because deciphering his excitable flurries of thought was a kind of sport. “Slacko jacko vass lee ooh!” he implored. “You want more smashed peas? ” I asked. “Vass lee ooh, vass lee ooh!” “You’d like to help us change the wet sheets? ” After repeating himself louder and louder, to no effect, he would start punching the air with each clump of sound. “Well, yes, it is a fight to be understood,” I said, nodding sagely. “And it always will be.” He ran moaning in the general direction of his mother.

These days, his language development is marked by oddball truisms: “Robots doesn’t drink juice” or “Garbage is something for to kick.” The lines have a beginning and an ending, and are studded with errors, like life itself—another hard lesson I might soon pass along, as he seems to have a nihilistic streak. When I scolded him for his callous spadework in the flower bed, he said, “I need to dig holes because holes need to be digged.”

Having figured out that language is a fantastic bit of machinery, he is desperate to master the controls. And I’m desperate to stall his progress, complicating matters endlessly with nuance. Let’s say we’re out for a doughnut (forty-five seconds of silence, guaranteed). I’ll hold the honey dip away from his grasping hands and study him as though with a magnifying glass. “The doughnut has a hole,” I say. “And the doughnut is whole. Get it? ”

“When I is older, I is bigger,” he said once, a solemn catch-all for the various ways he feels incomplete, or else a veiled threat.

“What if I also get bigger as I get older? ” I replied.

He was in the wrong mood for this, and the bottom lip began to quiver. “Don’t talk,” he said.

Sometimes when I’m being difficult, the boy will take a great inhalation of breath and try to change the topic. “Can I watch a video? Yes or no. Say yes, don’t say no. Can I? Say yes.” I shrug and cue YouTube. His steamroller method works especially well when I’m as flattened as he is by another long day of fresh air and stimulating encounters. I fall next to him on the sofa, and he flinches. Without looking away from the footage of a backhoe moving dirt, he says, “Go away, Dad.” He realizes I’ve brought a plate of raisins and cheese cubes and takes the snack into his lap before adding, “I’m having privacy.” For a split second, he remains the charming grammatical disaster I can feel superior to. Then he straight-arms me below the ribs. “Go away. Dave.”

Language is style, character, and independence. That’s the heartwarming take on it. Language also happens to be the first weapon of tyrants.