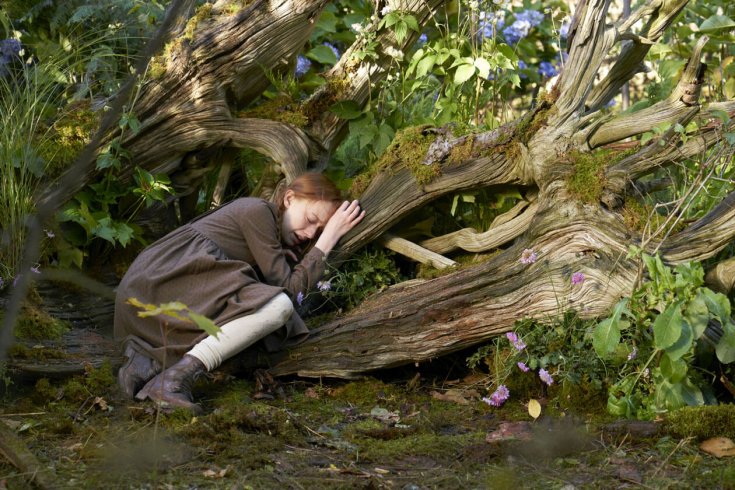 The first time Anne Shirley sets foot in her early twentieth-century rural classroom, four young women strut over like they have been studying the movie Mean Girls. Anne’s friend, Diana Barry, introduces her to the group: “Anne loves to read, and she knows ever so many big words.” Their tall blonde schoolmate, Josie Pye, replies witheringly, “Does she use them in every sentence?” The actress playing Josie delivers this with a fake laugh (bearing her big twenty-first century Chiclet teeth) and a queen-bee head tilt; with the sound off, it appears if as she’s scoffing at Anne for being a virgin who still uses an iPhone 3. Canadian children didn’t act this way in the 1980s, much less in 1908.

Every time I watch an episode of Anne, the new eight-part drama that launched on the CBC in March and is now streaming on Netflix (as Anne with an “E”), I feel as though the show’s writers are desecrating the L. M. Montgomery books I loved so much as a child. At first, the premise seems the same: a loquacious eleven-year-old girl with red hair, Anne, goes to live with an elderly pair of siblings. But whenever a scene unfolds in the one-room schoolhouse, the anachronistic dialogue and mannerisms make me wonder whether these are Degrassi characters in cosplay.

The novel Anne of Green Gables is funny and warm, if a tad moralistic, old fashioned, and tinged with the racism of the time. (“‘Give me a native born at least. There’ll be a risk, no matter who we get. But I’ll feel easier in my mind and sleep sounder at nights if we get a born Canadian,’” says Marilla Cuthbert to Rachel Lynde.) Despite these flaws, the author delivers a magical world with the ultimate juvenile fiction fantasy in Anne Shirley: the happy orphan. Literature is littered with harrowing childhoods served up as entertainment to a class of people who have the option of reading for leisure. But whereas Montgomery’s protagonist represents a subversion of this trope, the new Anne suffers from PTSD stemming from her tour of orphanages and violent families.

I recognize that Anne is good television, a prestige series by Emmy-winner Moira Walley-Beckett, who wrote for Breaking Bad, the drama about an Albuquerque chemistry teacher who cooks meth to make ends meet. I loved that show so much that I watched some of the final episodes in a bar because I didn’t have access to a TV. It is this idea of equating gritty with good, however, that is the pitfall. Whereas the 1985 Sullivan Entertainment adaptation starring Megan Follows is a delectable confection that captured the wholesome and imaginative spirit of Montgomery’s books, the first few episodes of this reboot border on poverty porn, with traumatic flashbacks that rely on dirt and dark lighting to elicit emotion.

It’s not just the tone that’s changed—this version of Anne Shirley is insufferable, a manic pixie nightmare girl in need of Adderall. She could not exist without Sex and the City protagonist Carrie Bradshaw, whom The New Yorker’s Emily Nussbaum identifies as the “first female anti-hero on television.” Reboot Anne is a bully to the hired help and a tiresome brat to the adults. We know we’re not supposed to like her, but that dislike doesn’t propel the narrative forward in any meaningful way. It does not help that Megan Follows, who starred in the 1985 Sullivan Entertainment adaptation, created a loveable Anne that’s been forever imprinted in the Canadian consciousness. She imbued the character with a wide-eyed comedic charm, making her imagination seem like an endless source of fun and hijinks, rather than the result of an abusive, itinerant childhood. (As if in awareness, actor Amybeth McNulty’s fake freckles and teenage awkwardness have been heavily Photoshopped in the Netflix promotional images for the show—her flower crown reads more like Lana Del Rey than Edwardian child).

One of the main reasons that Anne fails is, to my mind, that it is rooted in white feminism and misguided ideas of empowerment at the expense of what makes the books and other adaptations so magical. The show was launched with a message of unlikely, if unachievable, inclusion: “Anne’s issues are contemporary issues: feminism, prejudice, bullying and a desire to belong,” said Walley-Beckett, in a statement.

“We really wanted to create something that’s for everybody,” said the show’s executive producer Miranda de Pencier.

If this reboot is supposed to be a contemporary take, with contemporary stakes, created for everybody, then why isn’t there an examination of the erasure of the Indigenous people of PEI or its black community? The writers had choices, as evidenced by the way this Anne is more of a post-millennial child than a turn-of-the-century one. If this Anne is supposed to be a feminist firebrand who does her own thing, and if the writers are not going to honour the books, why doesn’t the storyline veer away from the social reality of the time and allow the character to befriend a Mi’kmaq or black child? I’d prefer that the writers didn’t cherry-pick contemporary issues to wedge into storylines from yesteryear. Due to these creative choices, this interpretation reeks of feminism without intersectionality—that is, consideration of the interconnected nature of oppressive institutions such as racism, sexism, and classism—bludgeoning us with a morality that’s disguised as social justice.

By the time I saw the fifth episode, where Anne gets her period—somehow Aunt Flo is a more compelling addition to the narrative than a non-white character—I knew that I was not going to fall in love. Not even the scenes where Anne and her best friend Diana get drunk when they mistake currant wine for raspberry cordial were able to win me over. To add insult to injury in this episode, Anne goes from loathing her classroom rival Gilbert Blythe to pitying him when she meets his father. This is a program to hate-watch rather than to adore. It was a misstep for the marketing department to set Anne up as the answer to our meth-fuelled Breaking Bad needs. There is a show for that—it’s entitled Better Call Saul, and it is also available on Netflix.

Doretta Lau (@dorettalau) is the author of the short-story collection How Does a Single Blade of Grass Thank the Sun? She divides her time between Hong Kong and Vancouver.