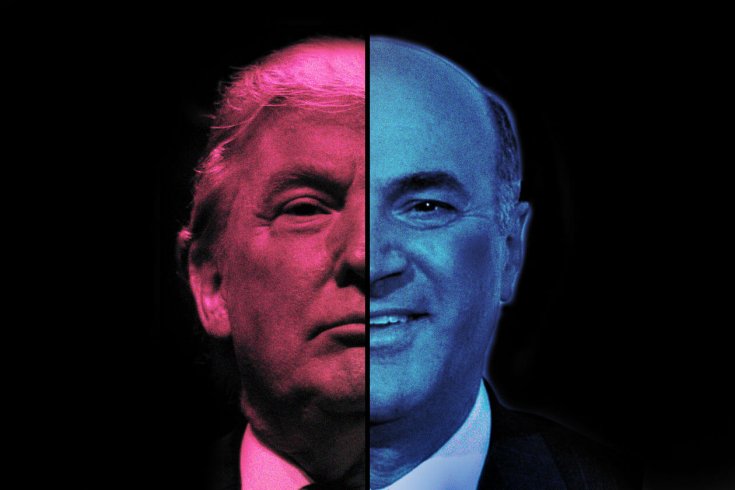 Never mind the fact that he has no history of public service, no record of political involvement, and no apparent interest in speaking one of Canada’s two official languages. It is still entirely possible—and maybe even probable—that Kevin O’Leary will be the next leader of the Conservative Party of Canada when the votes are counted on May 27. And you thought 2016 was bad.

His late entry into the race appears to have been driven largely by the unexpected success of Donald Trump. His candidacy already came with the Trump starter kit: a deep-seated willingness to provoke and outrage, an undeniable affection for his own reflection, and a reputation for being a bigger business success than the facts allow. His self-identification as an un-politician, the businessman-as-outsider who’s going to come in and sweep away the excesses of a bloated political elite, is an almost word-for-word replica of Trump’s original value proposition.

And if O’Leary is trying to hide the fact that he’s riffing on the themes that got Donald Trump past a similarly cluttered field of candidates and eventually into the White House, he’s not doing a very good job of it. Trump’s pledge to “drain the swamp” has become O’Leary’s promise to “scrape the crap.” In lieu of Trump’s record of sexual harassment, O’Leary has directed a quiver of belittling and condescending comments at women. Most recently, he described fellow Dragon (and recent critic) Arlene Dickinson as “emotional,” and leadership candidate Lisa Raitt as “confused.” He’s taken to calling Justin Trudeau “surfer dude,” a clear (and clumsy) take on Trump’s habit of nicknaming his political opponents. He has his own reality TV-related ethical conundrum, given that he’s said he may not leave Shark Tank if he wins the leadership. He even broke out Trump’s familiar chopping hand gesture in his closing remarks in Halifax on Saturday.

O’Leary has wisely set aside the portions of the Trump package that don’t work in Canada—the anti-immigrant dog-whistling, the attacks on the media, and the reassurances to pro-life voters and other social conservatives—and emphasized the ones that do.

If it weren’t for O’Leary’s immaculate dress—in place of Trump’s droopy ties and sloppy suits, he sports pinned collars and wears Tom Ford silk pajamas—he’d simply be an ersatz version of America’s 45th president. And haven’t Canadians always been suckers for ersatz Americana?

It’s tempting to dismiss O’Leary as a joke candidate. It’s easy, too. He constantly confuses Canada and the United States, for example—witness his mention in the recent Conservative leadership debate of “college” students, or his quickly-deleted reference to Parliament Hill in Ottawa as “Capitol Hill.” And for those who enjoy a more highbrow calibre of mockery, there are the numerous stories that unpack and itemize his various business failures (and failings). As veteran business reporter Bruce Livesey noted in a 2016 piece for the National Observer, O’Leary was forced to sell his eponymous mutual fund company after it was hit with a wave of redemptions.

But as with Trump, we underestimate O’Leary at our peril. He may have a history of embarrassing intellectual blunders, but does anyone remember how Michael Ignatieff fared at the ballot box? His stridently anti-Trudeau, anti-deficit message, meanwhile, will resonate with a Conservative base that appears to be not just frustrated by the prime minister’s success, but personally offended by it. While there were plenty of conservatives who were put off by Kellie Leitch’s anti-Muslim, anti-immigrant rhetoric, there are almost none who are going to be put off by attacks on Trudeau’s fiscal (mis)management. As such, O’Leary has wisely set aside the portions of the Trump package that don’t work in Canada—the anti-immigrant dog-whistling, the attacks on the media, and the reassurances to pro-life voters and other social conservatives—and emphasized the ones that do.

More important—maybe most important—is the fact that Canadians actually recognize him. For all of their campaigning over the last few months, most Canadians still don’t know who Lisa Raitt, Maxime Bernier, Michael Chong, and the rest of the putative front runners are. But according to a January poll by the Vancouver-based firm Insights West, only 23 percent of Canadians are in the dark when it comes to O’Leary. Yes, he has the highest percentage of people who rank him as “very unfavourable,” at 18 percent, but he also has the highest proportion who rank him as “very favourable.” Sound familiar?

O’Leary’s oversized public profile may be particularly useful in the Conservative leadership race, given the ballot structure that the party decided to use. Rather than relying on a delegated convention, in which people can move their votes if their candidate of choice drops off the ballot, the Conservatives went with a ranked ballot. And so, while many Conservatives may put their candidate of choice at the top, O’Leary could easily end up second or third purely because he’s a name they recognize. “As you start to go down the list that might actually be helpful,” says Insights West’s Mario Canseco, “because he’ll have more number two, number three, and number four mentions than the other candidates. So he may not have the most number one mentions, but if he makes it into enough ballots as a number two, number three, or number four, then he can win it for sure.”

Conservatives should tread carefully, though. While Trump’s win in November may be providing O’Leary’s candidacy with an enormous tailwind right now, that could very easily switch directions. Trump’s public approval ratings are already plumbing record depths for a new president, and if they continue in that direction—or if he gets impeached—the connection that people will naturally draw between him and O’Leary will not serve the Conservatives well. “In a way, the future of O’Leary’s political career depends on how Trump does,” Canseco says. “If he does well, it’ll be a little bit easier to make that connection. But if he does poorly, then nobody’s going to want a repeat of that here.”

And even if Trump’s tenure doesn’t go completely sideways, there’s still the matter of O’Leary’s inability to speak French. He might be able to win the leadership of the Conservative Party without being able to communicate with a substantial portion of the voting public, but it’s far less likely that he’d be able to win a majority in a general election. “The prize is fairly clear: you want to form the next government,” Canseco says. “And it’s going to be difficult to form the next government if you can’t go to Quebec and speak French.”

A better choice, in my admittedly biased view? Michael Chong. Yes, he’s a policy wonk’s wonk and a Red Tory’s wet dream, which probably disqualifies him in the minds of most Conservative voters. But unlike O’Leary, he actually stands a chance—a good one, even—of beating Justin Trudeau in the next election if Trump implodes before then. At last Saturday’s leadership forum he noted that many of his fellow candidates were all about “scratching itches,” whether it was refugees, defunding the CBC, healthcare, or guns. But indulging those itches will almost certainly mean they lose in the election.

Chong, in contrast, can appeal to the younger voters that O’Leary correctly pointed out had flooded over to Trudeau in the last election. He isn’t suspicious of immigrants—indeed, he is directly descended from them—and won’t indulge in the quiet (and not-so-quiet) bigotry that’s infected his party’s far right flank. Most importantly, perhaps, he believes in climate change and supports aggressive carbon pricing, but actually wants to use it in order to radically lower personal and corporate income taxes. This is an issue upon which the Conservatives can actually win a majority—and the Liberals could lose theirs. Oh, and his French? Impeccable.