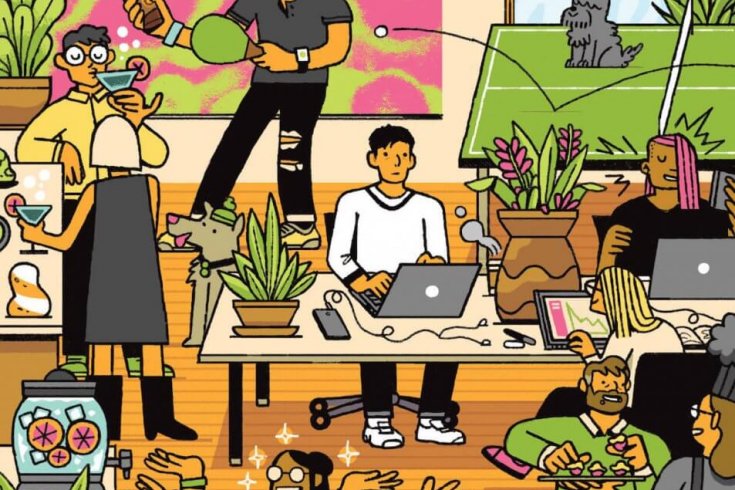 One afternoon last May, on the fourth floor of a massive renovation site in downtown Toronto, a lanky twentysomething in a hard hat asked me to envision the future. Jarred was from WeWork, a company that was in the midst of building a six-storey communal workplace where self-employed strivers could rent desks, mingle, and share ideas around craft-beer taps. The space, he assured me, was going to be funky. “There’ll be exposed brick and sockets to give it that modern look,” he said, gesturing at the dusty expanse.

Jarred was trying to sell me on more than just aesthetics— he was offering a utopian vision of community. My future coworkers, he said, would be fascinating. They were startup founders and young creative types. A tequila company had rented office space and wanted to host tequila Tuesdays. He opened the WeWork app on his phone, and I watched as a cascade of posts from my soon-to-be colleagues and collaborators flew past. “I’ve heard from people who have tried other coworking spaces and…the other ones aren’t bad,” Jarred said with an exaggerated pause. WeWork was just that much better. “We know your name, we remember your birthday, we remember your dog’s birthday,” he continued. I don’t have a dog, but I appreciated the sentiment. I signed up on the spot.

WeWork was founded by Adam Neumann and Miguel McKelvey in 2010, and it started with a single office in New York City. Today, the company has 274 offices in fifty-nine cities, from Bogotá to Tel Aviv. It is the fourth-largest startup in America, and it is reportedly valued at more than $20 billion (US), which puts it below only Uber, Airbnb, and SpaceX. WeWork leases buildings, renovates them to a millennial-approved sheen, and then rents them out desk by desk and office by office. There are now five locations in Canada, and at the inaugural Toronto office, a “hot desk”— a spot at a communal table or couch— starts at $500 per month, a permanent desk at $700, and a private office at $1,000. The company is now trying to become the leader in a crowded market where dozens of hubs all promise a variation on the same thing: an inspirational environment among like-minded members of the creative class, plus coffee.

According to a survey by Upwork and the Freelancers Union, more than one-third of workers in the United States were freelancers in 2016— some 55 million and counting. A study by accounting-software provider QuickBooks predicts that 45 percent of the Canadian workforce will be self-employed by 2020. WeWork, with its enormous pocketbook and hipster-capitalist aesthetic, is determined to become the default home for a new generation of white-collar workers. It believes that these budding entrepreneurs have no interest in the grey cubicles of the past. They want an office that matches their personality. And apparently, that means beer on tap and lots of it.

Three months after my tour, my coworkers and I began our new life together. The office looked like the lobby of a hipster hotel. There was a graffiti mural in the foyer, and the prayer hands emoji that Drake has tattooed on his arm was rendered in neon on the sixth floor. Fresh pastries were laid out, to go with the bottomless citrus- and cucumber-infused water and micro-roasted coffee. Rows of simple wooden tables ran across the common area, and there were booths for private phone calls, couches for conversations, and an open kitchen for contemplative snacking. On the upper floors, startups and established companies occupied small offices separated by glass walls (RBC, in an attempt to find new inspiration and new customers, had rented nearly an entire floor). The place had a first-day-of-school air, with freelancers holding their phones in front of their faces as they entered their selfies into the WeWork app— the virtual community that would complement our physical community.

Over the next few weeks, we showed up each day and tapped away on MacBook Airs to the sounds of Portuguese house music and old-school hip hop piped in through speakers. (“Rap is urban, and so is WeWork,” the company explains online. “But more profoundly, the common themes of rap are in tune with the company’s mission.”) While we created, cleaning crews in WeWork T-shirts quietly restocked the citrus water and wiped up our spilled drinks.

Fotini Iconomopoulos, a negotiation consultant, perched on one of the many couches. She had spent years working on the road and from cafés before trying out a coworking space. “I like the idea of seeing people that I can connect with on a regular basis, seeing familiar faces,” she explained. Dane Jensen, a high-school classmate of mine who is now the head of a performance-coaching company, sat at a nearby desk. “This place must have more Apple AirPods per capita than anywhere in the world,” he said one afternoon, warily looking around. Even so, Jensen said, the building’s vibe could feel invigorating at times. “If I’ve been working at home for too many days in a row and I’m feeling sluggish, it’s nice to go somewhere where there’s a lot of busy people being productive.”

Still, the future of work looked very much like, well, work. A hip hop soundtrack does not change the tedium of sending emails and updating spreadsheets. The most distinctive feature of the coworking life— imported from our social networks on Instagram and Facebook— was the pervasive sense that everyone was hustling, killing it, and eagerly selling themselves. The building was home to endless happy hours, meditation groups, and marketing seminars— elaborate PR affairs disguised as community events. On the WeWork app, a whir of requests whizzed past each day: a company offering “non-traditional lifestyle swag” was looking to barter its featured deals for business expertise; a food-ordering app that offers steep discounts on old food that’s destined for the dumpster (“think of it as the happy hour for food!”) was asking for beta users. The WeWork experience was recognizing that you were, at any given moment, both a product that needed selling and the target market for a noisy community of smiling, desperate salespeople.

When the WeWork founders talk about their company, they use the grandiose terms typical of Silicon Valley. Their stated mission is “to create a world where people work to make a life, not just a living.” A mere office-rental company, after all, could hardly justify a $20 billion valuation. As the Wall Street Journal noted, the office-leasing company IWG manages five times the square footage of WeWork but has one-eighth the market valuation. WeWork has found its investors by insisting that it is something different entirely— “space as service,” or a platform, or a culture. And it is now bringing that culture into disparate segments of modern life. WeGrow, a proposed private elementary school in one of WeWork’s New York City offices, aims to groom the next generation of entrepreneurs by teaching children about supply and demand. WeLive has created dorm-room-like apartment buildings in New York City and Washington, DC. The company is currently involved in building wave pools, opening gyms, and buying coding schools, all with the aim of creating “a place where we’re redefining success measured by personal fulfillment, not just the bottom line.”

And here, beneath the aspirational jargon, is a nugget of truth: WeWork is in the personal-fulfillment business. Because it’s offering a service that can be provided by anyone who can wrangle together a few desks and a French press, the product it’s actually selling is the contact high of being part of something that feels revolutionary. WeWork is promoting a mythology for those in the brave new gig economy: You, precarious worker who will never have a pension, are not a simple cog in a machine. You are an artist, the CEO of your own company, and the face of a dynamic personal brand. Your work is not merely labour, for which you deserve decent pay and security, but an extension of your personality. You’re doing what you love and paying $500 per month for the desk from which to do it.

The appeal of that pitch can wear off quickly. When I spoke to Iconomopoulos in November, she told me that after three months at WeWork, she’d decided to move on. She had been trying to network— posting on the app, introducing herself in the common area, and even holding an event— but as a thirty-seven-year-old surrounded by enthusiastic people a decade younger, she felt old and slightly out of place. She looked at other coworking options and toured Workhaus and Verkspace (which takes its inspiration “from the Scandinavian way of life”). The buildings, she said, all felt strangely familiar: they had the same open kitchens, the same glass dividers, the same safely “offbeat” art on the walls. Near the end of the month, she opted for a private office in Spaces, which is owned by IWG. The company seemed to be looking for a slightly older demographic and had belatedly adopted some Silicon Valley razzle-dazzle of its own, promising tenants entry into a community of “thinkers, achievers and imagineers.” Perhaps personal fulfillment is a lot to ask of a workplace, but Iconomopoulos was going to give it another try.

During my final week at WeWork, the building held a party. All six floors were crowded with tenants and guests eagerly drinking WeWork margaritas and awkwardly swaying to Drake. A young, blond exec cut the music for a moment to stand up on a riser and say how much she loved fulfilling the company’s mission. “This is more like a bar or a club than a workspace,” said the local member of provincial parliament, taking in the scene. Entrepreneurial caterers handed out business cards along with their miniature cups of artisanal pho. This party was work, of course, just like work was always a party. I ate a plate of duck-ragù pasta served on a pillow of cauliflower foam, drank a craft beer called Food Truck, and felt an inexplicable and totally disproportionate sense of despair.

The next morning, my last at WeWork, the building felt collectively hungover. I wandered in at 10:30 and found the place nearly empty, the desks still pushed to the edges of the office. I drank my citrus water and listlessly checked my email. A member of the cleaning staff— a young Spanish-speaking woman with a tight ponytail— was one of the few people actually working. She moved quietly, picking up the dirty mugs that people had left lying about and stacking them into the dishwasher. Her shirt was emblazoned with the company slogan: Do What You Love.

Josh Holinaty (@joshholinaty) counts Wired, The New Republic, and the Globe and Mail among his clients.