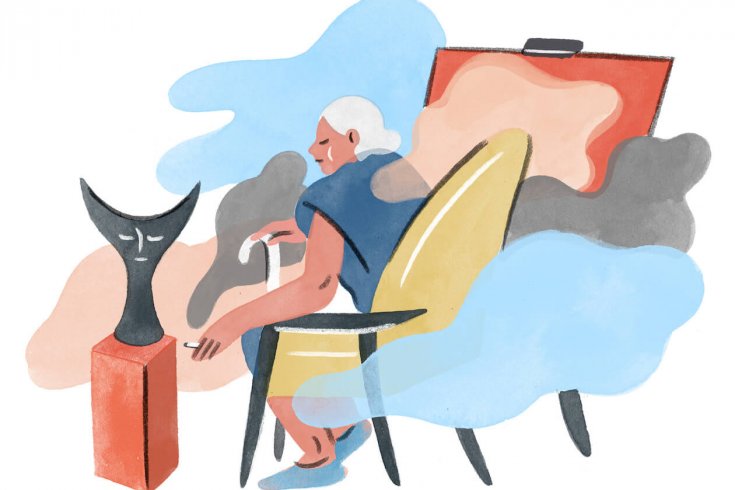 In the summer of 2009, in what could be described as a moment of wild daring or a postpartum psychotic break, I left my small baby and toddler with their father and flew to Mexico City to hunt down the last living Surrealist. I had happened on a copy of Leonora Carrington’s The Hearing Trumpet, which has a ninety-two-year-old heroine, while I was also writing a novel with a ninety-two-year-old heroine. When I found out the author was still alive, I felt I had to meet her.

I think I was half-crazy. I packed a floor-length Victorian dress, a silver belt, flamenco boots, a digital sound recorder, and an army jacket. Joined by two artist friends, one from Montreal, the other from New York, I felt scared but serious.

We stayed with a French filmmaker in the leafy neighbourhood of Condesa. At night, I sat in the hot bathroom and pumped breast milk and then dumped it down the sink. I climbed onto the roof and drank tequila. We’d been serial dialing a phone number we’d copied from the páginas blancas of the Mexico City telephone directory, and finally, someone answered. It was a hair salon.

During the day, we staged picnics around the city inspired by Leonora’s iconography, as if in an attempt to conjure her. We laid out a piece of black velvet in an empty fountain or on a dirt square in a park. We powdered our faces white, smoked clove cigarettes, and arranged fluorescent-pink Mexican desserts on a wooden boat that smelled like sex and floor cleaner. My friend Natalie took photos of us with an expensive camera she’d rented back in New York.

I found myself sitting slumped in a weird outfit under hot sun with my other friend, Alisha. I started to consider that my method for finding a mentor might be a bit indirect. I had thought that being around adults would feel freeing, and it did, but after intense mothering, that freedom is a trick. It’s nothing like the luxurious privacy and independence you imagine when in captivity with young children. Freedom doesn’t work that way—you use up whatever you have.

On the fourth day, by some miracle, we found the address. The following day, Leonora came to her door fine boned and piled with sweaters. She had intense black eyes. We’d dressed for her in long skirts and had braided our hair. She led us into her house, which had a tree growing through it. She talked of Picasso, her affair with Max Ernst, her rebellion from her wealthy family, her art, her writing. We smoked cigarettes surrounded by totems, Lee Miller photographs, and original paintings by Remedios Varo and Ernst.

She chain-smoked. “What do you want to know?” She wanted to get to the point. At ninety-two, her mind looped a little, and just like Bill Murray in Groundhog Day, we corrected our previous mistakes. For the next visit, we brought better offerings—her brand of cigarettes, pointed questions.

I asked Leonora about mortality, art, love. All of which she deflected with her laconic, dry English wit. She had studied Buddhism for years and simply said, “I would never have the pretension of knowing.”

We’d been keeping up, cigarette for cigarette, and I felt a bit sick when we left. The sun was lethal, though it glittered where it hit her door. I wanted to take a photo but didn’t. That night, my friends and I danced to mariachi-klezmer-hip hop at a club near the Centro Histórico. We didn’t talk much.

After I landed home, the baby refused to feed with me. He fell asleep, and I carried him, heavy as a sandbag, to his crib. My other son was facedown on his bed wearing a diaper and an empty gun holster. The garbage pail in the bathroom was full of my husband’s hair that he’d cut himself. The house smelled like pee and something else, but really, they’d gotten on just fine without me. I stood there feeling such tenderness toward their helpless, irresistible beauty.

Eventually, when I sat down at my desk to write, the voice became spare, unsentimental—like Leonora’s. I’d found, at a sentence level, the tone I’d been struggling with. In Mexico, away from my life, I felt I’d been able to really see myself. Now I see that no one else can give you answers to the big questions in life. It’s like looking upon something you have always found terrifying only to realize that it is actually magnificent.