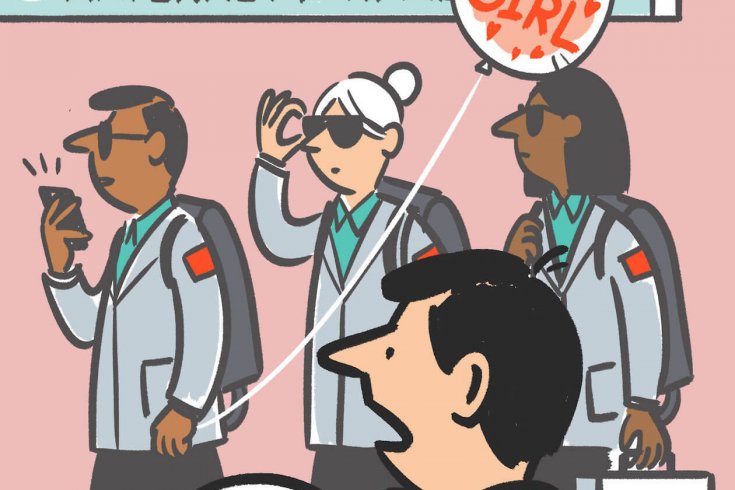 It typically starts with the ring of a phone, indicating a new baby is about to enter the world. For the two researchers on call, there is little time to shower or eat. Nurses and midwives are supposed to phone when the mother is admitted, but babies aren’t known for being predictable. It isn’t babies that the University of Ottawa’s Placenta Squad wants.

The two team members grab their lab clothing and homemade Placenta Research Team badges and rush to the university. They assemble their mobile lab—cooler, tools, gloves, masks, scalpels, and a specially vented bag containing a canister of liquid nitrogen—and load it into a car. The Placenta Squad has been trained in the transportation of dangerous goods. The team then navigates through the dark streets of Ottawa to the hospital. A fender-bender, a speeding ticket, or a simple wrong turn could spell disaster. But they must hurry: when a placenta has been delivered after a baby, there’s only a precious half hour to collect samples before the chance to unlock medical answers from the body’s least understood organ will be lost.

For decades, placentas, or “afterbirth,” as they were once known, were an afterthought for researchers. Scientists have long recognized that the organ is important for oxygen and waste transfer between mother and fetus. Like an airplane’s black box, the placenta may also hold the secrets of what happens to a fetus during pregnancy and why. What we know comes largely from unhealthy placentas—those that have been exposed to diabetes and hypertension, for example—from mice. Far less is known about healthy human placentas.

The Placenta Squad, formed in 2016 by Kristi Adamo, a professor at the University of Ottawa, consists of eight students; a research coordinator; and several research associates who are experts in pregnancy, nutrient transport, and fetal growth. Its researchers come from four hospitals and three universities, and there is no other group like it in the world. This work hasn’t been done before, according to Adamo, because it’s hard, expensive, exhausting, and time-consuming.

Adamo sums up the goals of her research: “My past mentor, Dr. Andrée Gruslin, used to say, ‘You could have a Walmart placenta—low cost and works okay—or you could have the Holt Renfrew placenta—made with the best bits, high functioning, looks magnificent, and lasts.’” Adamo wants to one day be able to recommend the optimal diet and exercise plan women should follow during pregnancy to achieve a top-of-the-line placenta.

Adamo believes in the developmental origins of health and disease—the idea that a person’s health can be traced back to their development in the uterus and in early childhood. While scientists know the placenta is the life-support system of fetuses, questions remain about the effects of nutrients, such as glucose, fatty acids, and amino acids, that are transferred from mother to child. An understanding of placental function and how it differs between mothers with various diet and exercise routines could help explain why some babies go on to develop childhood obesity and high blood sugar, for example, while others do not. It could even explain why some babies are born dangerously big or small; if such health issues can be understood, doctors could decrease the likelihood of birth complications.

Second-year master’s of science student at the University of Ottawa Jon Rankin—known on the squad as “Placenta Jon,” or PJ for short—joined the team during the summer of 2016. He studies placental mitochondria and their respiratory rate, which can be used as a marker of placental efficiency. Placentas with the most-efficient mitochondria handle biological stress best. While most of PJ’s placenta pickups have been at the four participating Ottawa hospitals, he once did a pickup at a home birth with a lively atmosphere: “The neighbours were over. It was like a big party,” he remembers. The family allowed the team to set up its sampling equipment on the kitchen counter. “All the while, there’s dinner going on to our immediate left.”

Adamo estimates the team will need twenty donated placentas per year for the next four years to adequately power their studies. But recruiting women for the research has been a challenge. Not everybody is open to the idea. (One member learned not to ask his child’s pregnant high-school teacher during parent-teacher night if she was willing to donate her placenta. It didn’t go over well.) The question of donation always raises eyebrows. “Most of the time, people are highly intrigued because it’s so novel,” says Alysha Harvey, a former clinical research associate at the lab. “Either that or they are disgusted.” But the pregnant women who do participate in the lab’s studies, she says, are highly invested in their placentas in a way other women are not; they feel as though they are contributing to science and, possibly, the health of children in the future. And the requirements for participating are fairly simple: they include giving blood samples while pregnant, doing a simple walking test, wearing a pedometer, and keeping a food journal for three days of each trimester of pregnancy.

Some women are fine with their placentas being sampled but don’t want to give away the whole thing. While the vast majority of placentas end up in hospital incinerators—a fact the Placenta Squad finds hard to bear—some mothers take their placentas home. In the 1970s, the trend of eating one’s placenta emerged. Some women fry their placentas, claiming they are a good source of iron; some companies offer to turn placentas into easy-to-swallow capsules. Other women bury their placentas in the yard with seeds so that a tree will grow in unison with their child. Artistic types have been known to make a “tree of life” print by stamping their placentas onto paper—the veins of the placenta look like branches and the umbilical cord like a trunk—to create a representation of the mother-child bond that can be hung on a wall. In 2008, British designer Alex Green created the “Twin Teddy Kit,” a how-to guide for turning your placenta into a teddy bear.

The squad reassures mothers that it only needs approximately 5 percent of a placenta. “I would never want to stifle anyone’s creativity,” says research associate Zach Ferraro. “They can do both—contribute to science, a more thorough understanding of how to prevent many chronic diseases in the future, but also make placenta art.”

Though women living outside of Ottawa currently cannot donate to the Placenta Squad’s research, Harvey thinks others interested in helping science won’t have to wait for long. “I do believe there will be quite a few researchers that will hop on the bandwagon and will likely engage in research specially related to the placenta,” she says.

The typical day continues in a birthing unit of the hospital where the baby is born. The researchers set up their equipment in the “dirty utility room,” where used laundry and waste are stored. After following its research participants for up to six months, the squad finally reaches the culmination of hundreds of hours of work. Finally, a nurse opens the delivery-room door and hands the squad members—decked out in goggles, masks, lab coats, and gloves—a metal basin holding a squishy, warm, red placenta.

On one side, the placenta looks like raw liver; the other side has a membrane covered in visible blood vessels. Outside of a mother’s body, as the minutes slip by, the placenta’s cells and their mitochondria start to die. Using surgical instruments, the team dissects nine sets of tissue samples and places them into liquid nitrogen or special solutions.

As the new baby is doted over, the researchers return the placenta to a nurse. Though the sampling is finished, the night’s work has just begun. The squad heads to its research facility to run PJ’s mitochondrial experiments. They use a hand-held drill to grind small pieces of placenta in a sugar solution that’s placed in a high-frequency centrifuge to spin until the mitochondria separate out from the fluid. Adding chemicals to a chamber that simulates the inside of a body, the team tests the function of the mitochondria.

With tissues safely preserved and PJ’s experiments done, the Placenta Squad returns to the main lab to place the samples in a negative-eighty-degree freezer. Before they leave, the squad members clean their equipment and restock the delivery bag. Another call could come at any time.

Sarah Giles is a locum family/ER physician in northern Ontario and the Northwest Territories. She is a 2017/2018 Munk Fellow in Global Journalism at the University of Toronto.
Kyle Metcalf