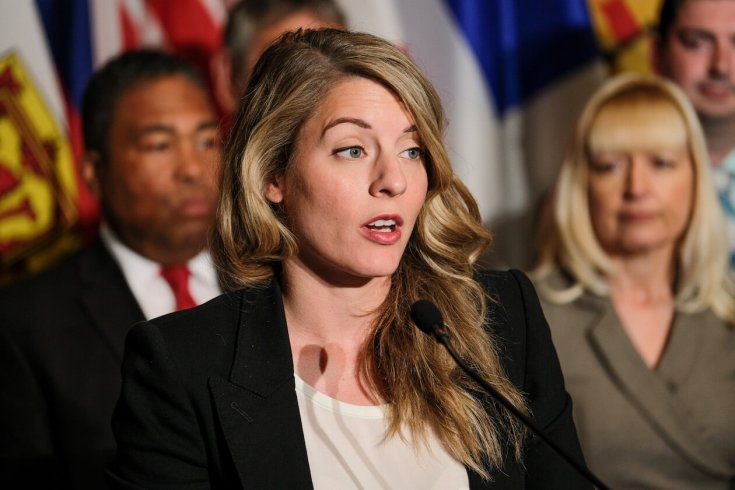 If every generation gets the culture it deserves, then Creative Canada is the cultural policy we deserve. With its panegyrics to innovation, digital solutions, and “creative hubs,” Heritage Minister Melanie Joly’s new strategy, released on September 28, is an unmistakable product of our moment. But beneath the carapace of Silicon Valley jargon and political sloganeering hides a long-standing national anxiety: that Canadian culture is imperilled by American technological disruption. It’s an anxiety at least as old as the 1949 Royal Commission on National Development in the Arts, Letters and Sciences.

The Massey Commission, as it is often called, and which ran until 1951, reflected a fear over what the rise of mass culture in general (and television in particular) meant for the survival of a distinctively Canadian culture. The actual historical significance of the commission’s 500-page report—which called for more federal funding for culture and led to the creation of Library and Archives Canada and the Canada Council for the Arts—varies according to who is telling the history. It either laid the policy groundwork for the most important institutions of Canadian intellectual and cultural life over the next half century (including the Canadian Broadcasting Corporation and the National Film Board) or it was a mostly incidental symptom of economic prosperity. What is stunning about the Massey Report today is not only its unembarrassed assertion that culture actually matters but that culture constitutes the bedrock upon which every other national accomplishment rests. In the view of the commissioners, we are talking here about:

Nothing less than the spiritual foundations of our national life. Canadian achievement in every field depends mainly on the quality of the Canadian mind and spirit. This quality is determined by what Canadians think and think about; by the books they read, the pictures they see and the programmes they hear.

Creative Canada has been touted as revolution in federal cultural policy. It is a matter, we are told, of facing reality, of accepting our digital future. It is also a categorical rejection of “culture” as it was conceived by the authors of the Massey Report. Where the authors of that report spoke of “art and letters,” Creative Canada speaks of “content creators.” Where the earlier document explicitly posits culture as bulwark against the “materialistic society” Canada could one day become, Creative Canada is just as explicit that culture is an “engine of economic growth and a competitive advantage” in the materialist society we already are. The Massey Report imagined culture as the vehicle of moral and intellectual education. Creative Canada imagines culture as something you stream on Netflix.

Creative Canada promises nothing short of an epochal “transformation in how we view culture and creativity.” The stakes are indeed enormous: the resulting policy will influence how Canadians get our information, determine the fate of the nation’s most important cultural institutions, and shape the contours of the Canadian imagination for decades to come. What Minister Joly has delivered, however, is a paean to Silicon Valley, a gift to American technology firms, and a vision of Canadian culture as governed by web analytics and productivity tools. Creative Canada is all media and no message, a cultural policy that reflects little of Canada and none of our culture.

Few would suggest that Canadian cultural policy isn’t due for a reboot, given changes that have rocked the publishing and telecommunications industries in recent decades. Canadian daily newspapers have lost 96 percent of their advertising revenue since 2008, while cable subscriptions are down by record numbers—which has led to a corresponding revenue loss for the Canadian Media Fund (CMF), a crucial source of funding for homegrown television and media projects. The CBC, meanwhile, hobbles along in a state of permanent crisis. All of this unfolds alongside, and is partially a product of, the ascendance of streaming services, social networks, and mobile platforms.

Creative Canada attempts to answer the urgent question of how Canadian culture and our institutions will survive in the digital ecosystem. The much-discussed centerpiece of the plan is a $500 million deal with Netflix to establish a permanent production presence in this country. The plan also involves increased federal contributions to sustain the CMF, $125 million in new funding to promote Canadian culture abroad, and reviews of the Broadcasting, Telecommunications, and Copyright Acts.

The problem with Creative Canada isn’t that it devotes money to artists. It’s that it treats those artists as tech entrepreneurs. The ethos of Silicon Valley is encoded into the very DNA of our new policy framework. Artists, says Creative Canada, are valued not for the art they produce but for “playing a critical role in driving innovation.” The plan answers the call “for developing the business, technology and entrepreneurial skills of Canadian artists and creators.” The framework’s big idea—aside from the Netflix partnership—is the $300 million investment in “creative hubs” to incubate a startup culture and provide creators “spaces where they can build their entrepreneurial skills, create, collaborate and innovate.” The obeisance to Silicon Valley isn’t just rhetorical: after bluntly stating that the government will not bail out models that are no longer viable—i.e., print based—Joly announced a partnership between Ryerson and Facebook to create a new digital-news incubator. Creative Canada’s answer to the crisis of local news outlets is to provide funding to “accelerate” partnerships with American technology giants.

We’ve seen where this leads. The story of journalism’s increasing dependence on technology firms such as Facebook and Google has been told many times, but Franklin Foer tells it best. Foer, the long-time editor at New Republic, experienced first-hand the consequences of his magazine’s transition to digital after it was purchased by Chris Hughes, a co-founder of Facebook, in 2012. For the first hundred years of its history, New Republic had prided itself on being a magazine of ideas devoted, in Foer’s words, to elevating “the cultural and political standards of the country.”

That changed with the magazine’s transition to digital and the accompanying analytic compulsion to produce “snackable” and “trending” content to drive up web traffic and increase advertising revenue. New Republic, under Hughes’s tenure, transformed from an intellectual magazine into a technology company—one that, like virtually every other newspaper and magazine today, needs Google and Facebook to reach its audience. “The problem isn’t just the media’s dependence upon Silicon Valley companies,” Foer writes in his recent book, World Without Mind, but its “dependence upon Silicon Valley values. Just like the tech companies, journalism has come to fetishize data. And this data has come to corrupt journalism.…Once journalists come to know what works, which stories yield web traffic, they will pursue what works. This is the definition of pandering and it has horrific consequences.” It was enough to drive Foer from the magazine in 2014.

Those horrific consequences, however, have been lost on the architects of Creative Canada, whose plan to incentivize deals with Facebook and Google will make the entire Canadian cultural sphere increasingly vulnerable to the whims of American tech giants. The rationale inherent in the government’s plan will turn the leaders of Canadian art and culture into followers of big data. Creative Canada won’t protect the distinctiveness of Canadian art but will shackle it to the homogenizing logic of corporate analytics. The result will be a more calculated, data-driven, snackable Canadian culture, one chasing web hits abroad in order to justify its funding at home. Politicians will sell the concept as an opportunity to “bring Canada to the world,” but Canadian news consumers will increasingly rely on American technology firms, and we will become less informed and more manipulable.

Make no mistake, the government’s increased investments in art and culture should be celebrated by anyone who values art and culture. As Nick Mount concisely puts it in Arrival: The Story of CanLit, “Government support for the arts exists in Canada because private support does not.” But the government’s defence of arts funding in purely economic terms is troubling, and not only because that argument will cease to apply the moment an economist can show that non-arts-based forms of funding bring a bigger return on investment.

The real issue is that Creative Canada profoundly misunderstands the place of art and culture in our society. No lasting or meaningful monument of Canadian art will ever emerge from the desire to benefit the middle class. Leonard Cohen’s poetry would not have been deepened by his participation in a creativity hub. (His idea of a creativity hub was a Buddhist monastery.) Margaret Atwood—whose Handmaid’s Tale and Alias Grace have been adapted into celebrated examples of streamed entertainment—did not write her novels to satisfy the metrics that determine the content of streamed entertainment. To tie Canadian culture to the analytic outputs of media platforms, to enlist it in cause of economic productivity, is to ask art to renounce its status as art and to assume the function of evangelism.

In The Educated Imagination, critic Northrop Frye argued that culture “provides the kind of values and standards we need if we’re going to do anything better than adjust.” Creative Canada, by contrast, is an instruction manual on how to adjust. It is to cultural policy what tweets are to literature, what LinkedIn is to poetry, what Facebook is to friendship. Canadian creativity will, of course, continue to thrive long after Creative Canada has been forgotten, and it will flourish in direct proportion to its capacity to resist the homogenizing, programmatic, and deadening future the policy imagines.