Defeating Terrorism With Normalcy | The Walrus
Skip to content 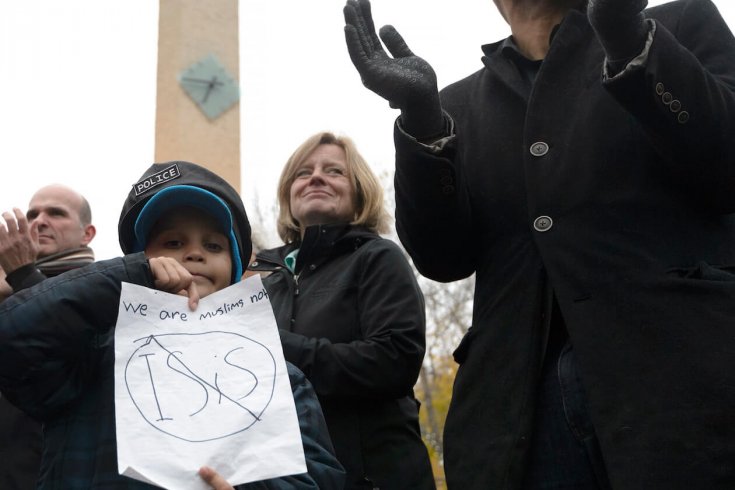 The first sign something wasn’t right came around 8:45 p.m. Saturday. There were police checkpoints set up in every direction around my house. I live in McCauley, a gentrifying Edmonton neighbourhood where a drug bust isn’t out of the ordinary, but this was unheard of. My wife, working the night shift at the hospital, texted me at 1 a.m. “Crazy stuff happening downtown,” she wrote. “I heard a guy killed a police officer right by our house.”

She was wrong; the officer survived what was soon deemed to be a terrorist attack. In fact, police constable Mike Chernyk, on traffic duty for a football game, fended off the attacker, who had repeatedly stabbed him—that is, after he had been flung several feet by the assailant’s car. Chernyk also blocked the attacker from stealing his gun and then rose to his feet and gave chase. The suspect got away. When the accused—a thirty-year-old Somali Canadian refugee investigated two years ago for espousing extremism—was discovered driving a U-Haul truck at a checkpoint, he made a dash for Jasper Avenue. He was captured alive, without a single shot fired, but not before he had driven over four pedestrians on the city’s main drag, full on a Saturday night; two are still hospitalized.

But in the early Sunday morning hours following the attack, nobody knew much about anything and were prone to getting things wrong. An image from CTV video journalist Sean Amato, who zoomed into the open door of the suspect’s vehicle, captured what looked a lot like an Islamic State flag. I saw the still shot on Twitter, where people debated whether to jump to conclusions and others mockingly replied to the Drudge Report’s tweet about the event, saying Canada should “Have a ban on U-Hauls.” In bed, I thought about September 11, 2001. I remembered the TVs in front of me replaying footage of planes slicing into the twin towers, the confusion, the sense that what was unfolding was horrific and world changing. But far from the eastern US, on the other side of the continent in frigid Canada, the suicide attacks had felt distant.

The unthinkable moved closer and closer. Over a few short months in 2014 and 2015, IS-inspired lone wolves killed two soldiers in Ottawa and Saint-Jean-sur-Richelieu, Quebec and al-Qaeda-linked terrorist group al-Shabaab put a hit on West Edmonton Mall. Now it had happened here—three blocks from my house, where my pregnant wife catches the bus.

I didn’t get much sleep. A Facebook friend posted that their relative was one of the victims and in the ICU. She asked that we pray for her, for all the victims, for the police, for the man responsible, and for his family. The clock radio clicked on at 8 a.m., playing clips of the police chief confirming the IS flag and calling it an “act of terrorism.” A couple hours later, I walked to the first scene of the crimes.

Online and in broadcasters’ voices, it sounded like a meteor had struck Edmonton. On social media, people spoke of Canadians “reeling” and described a dark energy forming over the city. But I saw no such thing. Instead, the streets were streaming with cars. One of McCauley’s many liquor stores was open, for early drinking. I got coffee from a convenience store and asked the clerk about the incident. The first thing he wanted to talk about was the Edmonton Police Service’s intrepid response. They succeeded in their first manhunt for an Islamic extremist on the loose. They chased him through a crowd, and the incident had resulted in no deaths, so far. This could’ve been so much worse, we agreed.

The clerk was a Somali Canadian, a member of a community that for years has struggled with losing young men to gang violence and radicalism; two years ago, three cousins from Edmonton died fighting for IS in Syria. Many of them live here, in Edmonton’s central neighbourhoods. A very visible and integral part of local life, they will—with this incident—be under even greater scrutiny.

But I couldn’t continue our chat—I was on my way to an interfaith dialogue with Daayiee Abdullah, America’s first openly gay imam. The attack coincided with a busy weekend that included Allah Loves Us All, a conference affirming that one can be Muslim and homosexual. I arrived at the conference around noon, curious to see how they’d approach the arrival of violent Islamism a mere four blocks east of them. Muslim groups in North America generate condemnations of every attack done in their religion’s name or stand to be accused of collusion or complacency. How do you walk the line between distancing yourself from those ideas, sending a positive message about your own, and comforting the afraid?

The opening words came from a reverend with McDougall United Church; perhaps the Muslim speakers had condemnation fatigue. The reverend hesitated to say the T-word and instead addressed “what they’re calling a terrorist attack.”

But it was terrorism, wasn’t it? And it rarely gets more terrifying. You’re out living your life when, suddenly, one of those automobiles that we hardly register veers off and runs you over. The driver isn’t a reckless drunk but a maniac who wants to kill you in the name of a prophet many Canadians—even us who grew up in Muslim households—hardly know. The last sixteen years have foregrounded religion’s dangers. But religion has also showed acts of kindness: in sponsoring refugees and giving wildfire disaster victims shelter.

And this crowd just wanted to know how they could be better at the kindness. So a minute after the reverend acknowledged the elephant in the room and warned against societal division, a gay imam, a priest, and female rabbi started discussing Abrahamic texts regarding homosexuality.

Where were all the scared people?

At the second crime scene, the U-Haul, which crashed on its side and had its windshield smashed so the police could use a taser to apprehend the attacker, had been lifted and towed away. Soon, the caution tape was cut and only small strips of yellow remained, flailing in the breeze. A two-person news crew tried to keep warm before the next live segment.

Around the corner, I ran into friends on their way to get pancakes. Models were posing, wearing a tux and bridal dress for a fashion photographer. A spooky clown taunted the queue outside the annual haunted house on Jasper Avenue. Inside a busy café, little girls coloured in books, and people chatted about whether a new Korean restaurant actually served intestines. At around 2 p.m., Jagmeet Singh, a bearded and turbaned Sikh man, became the first person of colour to lead a federal Canadian party, and the table beside me talked about that awhile.

Where was the trauma that even the New York Times hinted at?

If this can happen in Edmonton, it can happen anywhere, and the city’s sudden adjustment to this fact is, in fact, remarkable. This normalcy looked like resilience to me, but to others it will understandably be interpreted as complacency. Of course, Twitter had strong opinions: “Sharia Law was alive and well in Canada, we’ve allowed too many refugees, multiculturalism is biting us back.” Also: “fight hate with love, diversity is our strength, do not give into bigoted rage.” News of two young women randomly stabbed to death in Marseille by a man with a Tunisian passport pushed opinions further to their extremes, and in a few hours, a white Nevada man would be responsible the deadliest mass shooting in modern US history, adding gun control to the online debate. In both attacks, the terrorist was killed and IS claimed responsibility with no evidence, yet it still hadn’t taken credit for Edmonton’s attack, despite its flag being physical evidence.

None of this seemed to affect off-screen Edmontonians, who were just trying to squeeze the most from a Sunday. The darkest cloud was outside—an overcast sky with chilling heavy winds and our first frigid day after a decent summer.

Pedestrians quickened their paces, some to a peace-and-anti-extremism rally at city hall. Few knew about it. I ran into an acquaintance on her way to a nice Italian dinner, and when I told her I was going to the rally, she asked, “For what?” She hadn’t been on the internet that day.

Waiting on the podium before a microphone, MLAs, councillors, MPs, and several Muslim faith leaders awaited the six o’clock start. Three or four hundred people were there, including dozens of people with dark skin, long beards, headscarves—everything average Canadians are encouraged to fear. The crowd was much larger and the temperature much colder at the vigil last January, when a white extremist in another province gunned down six people, who had their backs turned, in a mosque. You have to imagine Sunday’s crowd would have been much larger and the grief more pronounced had there been a death toll. Everyone was thankful and spirits were positive. When an MLA showed up late to singing the national anthem, the crowd chuckled and jumped into an impromptu version.

The most impassioned speech was Sadiq Pathan’s. Pathan, an imam from the Al-Rashid Mosque, enthusiastically announced to all radical Muslims in his community, “We will call you out—we have no place for you in this society!”

The rest spoke in measured and confident tones. “We have all been tested by this act,” said Mayor Don Iveson. “But we have already shown, and continue to show, where we stand here tonight. We stand together. All faiths. All cultures.” His only fear, he said, was that a refugee child would go to school on Monday, scared. “If we find it within ourselves to care for that child in the coming days, the coming months, the coming years, that person will be able to look back on this moment and will have felt included, supported as part of our community.” The usually subdued mayor shouted repeatedly, “We will not be divided!”

Following a police inspector echoing this message, Minister of Infrastructure Amarjeet Sohi—who once survived more than a year of solitary confinement in India on wrongful charges of terrorism—took the stage. He didn’t want Edmontonians to ignore the intention of the attacker. “That act of terror had a purpose. That purpose was to instill fear. That purpose was to divide us,” he said. “But that purpose has failed miserably.”

Beside him stood two small Middle Eastern boys. They had made protest signs with a Sharpie and white paper, which were flopping in the increasingly heavy winds. “We are Muslims, not ISIS,” read a message held by the kid in a costume police hat. They seemed to have a better grip on reality than the couple across from them, on the opposite side of rally, twenty feet away from the nearest vigil-goer.

A middle-aged white man and older woman looked bored with their sign: “No Shariah [sic] in Canada.” It was not meant to be an observation, but it felt like one. 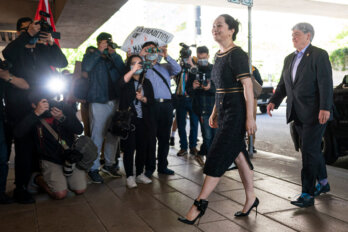