Who Owns Colombia’s Gold? | The Walrus
Skip to content 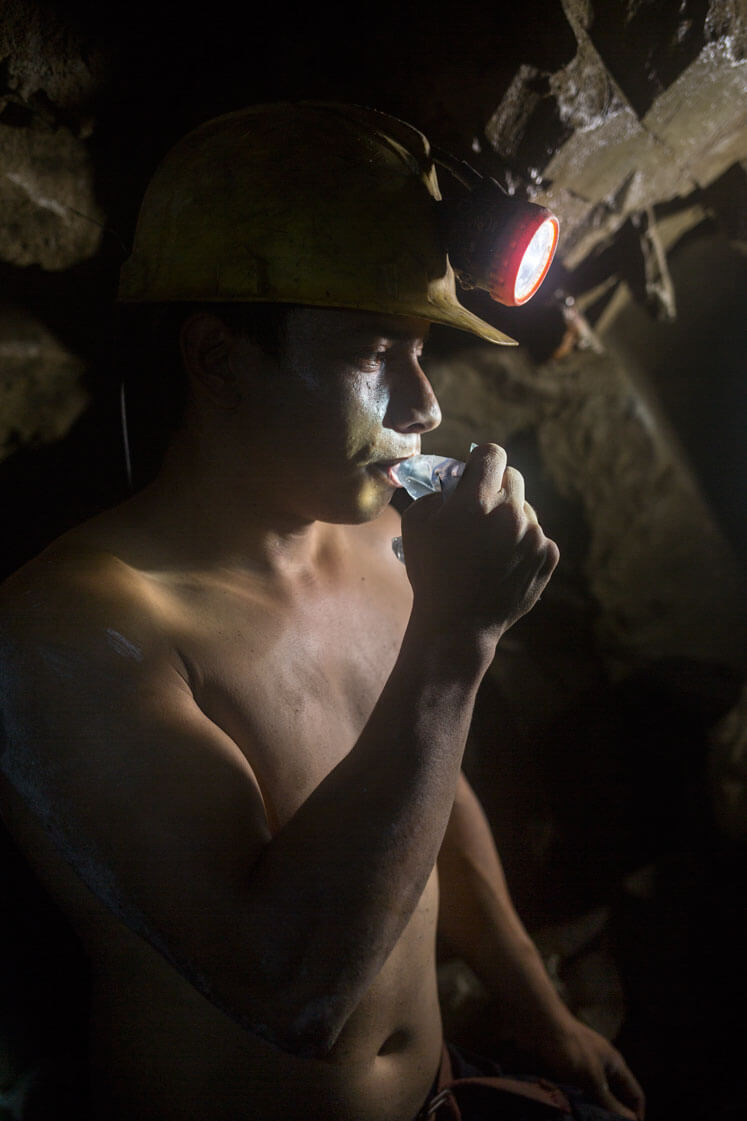 Day after day, in the mountains around Segovia, Colombia, men emerge from mine shafts bearing picks and hauling bags of ore. Here, gold mining is a way of life, predating the arrival of the Spanish in 1499. Fernando Gómez, Segovia’s municipal mining secretary, says that 80 percent of the city’s 42,500 residents are employed through the industry: in addition to the miners, there are the women—chatarreras—who sort through low-quality ore, as well as the mule drivers who carry rock to the city’s sixty-plus refineries, all of which are filled with labourers who extract the gold. These are the self-described “traditional miners”: members of a local, low-tech tradition that goes back generations.

Gran Colombia Gold (GCG), a Canadian company newly active in the region, has a different name for these workers: they are “illegal miners” stealing gold ore from inside the company’s mining title. The Toronto-based firm, which arrived in Colombia not long after the 2008 Canada–Colombia Free Trade Agreement opened up the country to development, is now involved in a lawsuit accusing the Colombian government of failing to protect the company’s investment and seeking at least $250 million (US) in damages. 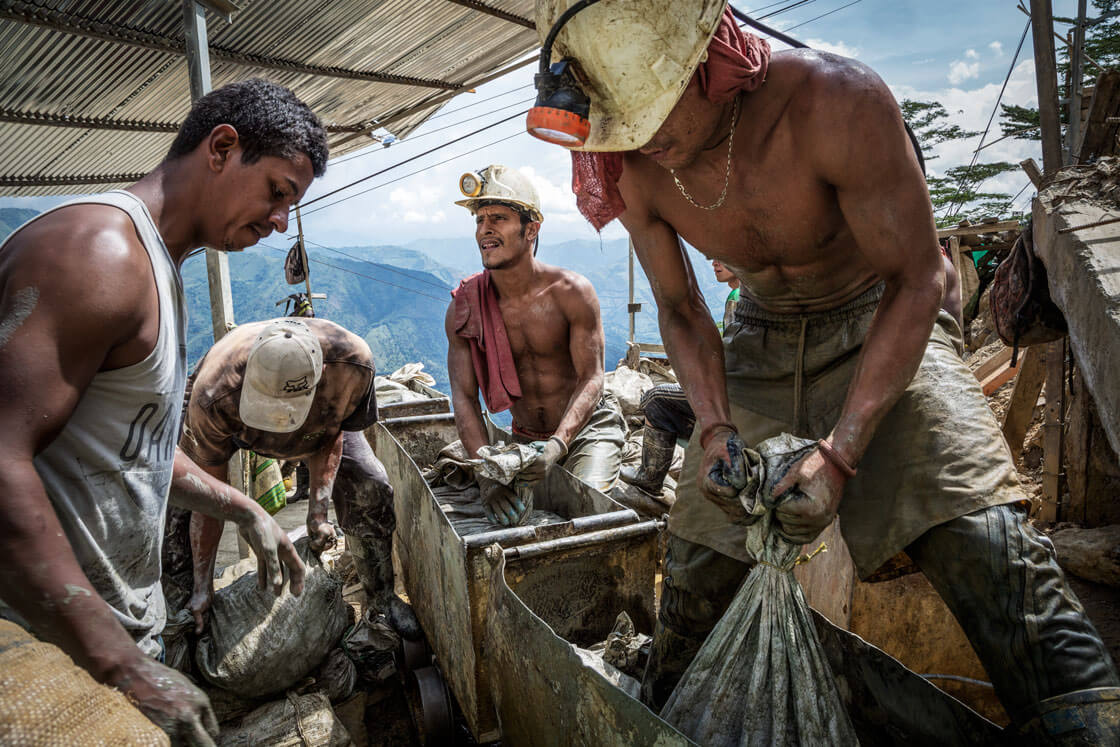 The conflict dates back to 2010, when GCG acquired the mining title from Frontino Gold Mines for approximately $205 million (US). The former owner had tolerated traditional miners. “Frontino worked on the motherlode while the traditional miners were exploiting secondary veins,” Eliober Castañeda recalls. Castañeda is the former leader of Mesa Minera, an organization created to defend Segovia’s small-scale miners. As he explains, when GCG took over, it made the locals an offer: become subcontractors of GCG and deliver all mined ore to the company, or stop mining entirely.

According to GCG, there were 196 “illegal” mines located within its title in 2012—as of today, only forty-two have signed one of the company’s contracts. Gómez defends these ongoing “illegal” operations and describes GCG’s offer as “a form of modern slavery”: “They use the natives’ workforce, but they decide the compensation without any consideration for if you were here before their arrival.” The traditional miners now live under threat, as GCG regularly demands that the authorities expel any uncontracted workers, using force if necessary. In its lawsuit, GCG states: “The State has effectively stripped the exclusive rights held by GCG . . . by failing to evict illegal miners as promised and required by law, thus leaving GCG no choice but to engage in negotiations with illegal miners.”

To date, the government has not intervened, likely because doing so in Segovia, where most rely on traditional mining, could set the region ablaze. But the ad hoc truce may not hold: in the last several years, the government has made regulating mining one of its priorities. As of 2017, approximately 80 percent of Colombia’s gold was mined without a government-sanctioned title, by everyone from the traditional miners of Segovia to criminal organizations. This is a status quo that the government seeks to end.

More regulation could, in theory, lead to certain positive changes. In Segovia, for example, many traditional miners still use mercury to refine their gold despite this being prohibited by law in July 2018. A study that year found that more than 11 percent of women in the area had mercury in their breast milk (according to the World Health Organization, even minor exposure to mercury can lead to serious health problems, particularly for young children and those still in utero). Still, traditional miners blame the government for not helping them transition to safer practices. According to Duglas Ramos, one of the shareholders of Las Brisas mines—which, with more than 100 workers, is one of the larger traditional mining operations in the area—“We know we must stop using mercury. But the state doesn’t help us to find an alternative.”

It will take the ruling international tribunal at least two years to reach a decision in the GCG lawsuit. Meanwhile, fighting on the ground continues. Residents of Marmato, a sixteenth-century mountaintop town of about 8,500 that’s a seven-hour drive from Segovia, is facing its own problems with the company. GCG arrived there in 2011 and began buying titles from local miners. Soon, it became clear that its plan was to dig a massive open-pit mine—one that would require the town be razed.

The citizens fought back, and in February 2017, Colombia’s Constitutional Court stated that Marmato’s Afro-descendant population (which, as of 2005, was 55 percent of the town) and Indigenous residents (16 percent) had to be consulted before the village was destroyed. This caused GCG to alter its plans for the mine, and the company has included this setback in its lawsuit. It says that, by requiring that locals be consulted before mining operations get underway, the government has been giving preference to their “alleged constitutional rights.”

Marmato residents are now on the offensive: Rubén Darío Rotavista, former president of the Marmato Traditional Miners Association, says that GCG left its mines inactive for more than six months due to the dispute and that, according to the country’s mining code, this means the company has lost its titles to the land. (GCG disagrees with this reading.) Traditional miners have since resumed their operations in the area, but because they don’t have titles, their work remains technically illegal. Rotavista says that they are now lobbying the government to receive the proper permissions. In the interim, they have been selling some of their gold through the black market. Rotavista says that the situation remains far from ideal, as the miners must price their gold at 30 percent less than its international market value.

The future for the miners is uncertain. On October 7, GCG released a letter of intent to sell its Marmato operation to another company. Yamíl Amar, a local refinery owner, feels confident that the traditional miners will eventually win. “They hurt us a lot, but we didn’t lose the battle,” he said. “We managed to survive.”

This project was made possible by the Michener-Deacon Fellowship for Investigative Journalism.

Rémy Bourdillon is a freelance journalist in Quebec.
Roger LeMoyne 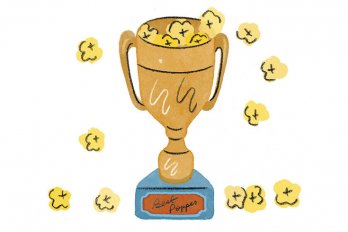 How to Make the Perfect Popcorn