How Euchre Healed My Family | The Walrus
Skip to content 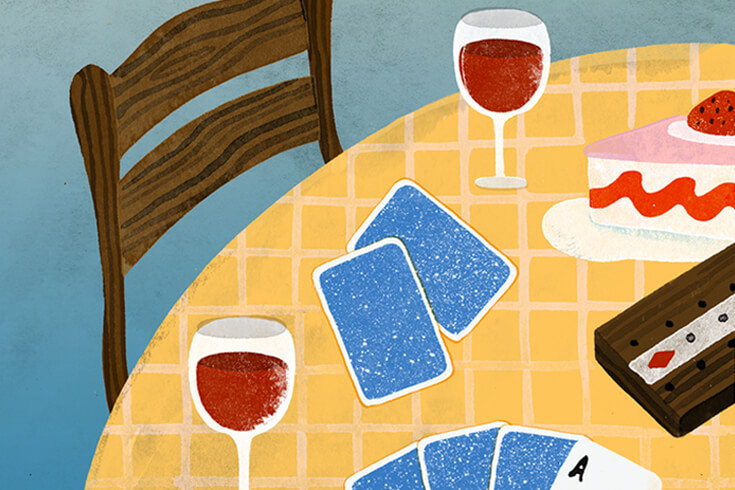 My grandmother loved euchre so much that we dropped a deck of cards into her casket. “Deal us a hand, Beth,” my grandfather said. In spite of our grief, we laughed. She would have laughed too.

Euchre—believed by some to have been introduced to North America by nineteenth-century German settlers—runs deep in my family’s history. When I was growing up in New Brunswick, the only people I knew in the area who played were my mother, my grandparents, and the friends they had converted. In my grandparents’ house, the twenty-four-card deck and scoreboard were brought out as soon as the dinner plates were cleared. We played over strawberry shortcake and wine, both homemade, wrapping up each evening around nine o’clock. Every second month, there was a similar scene in my grandparents’ other home, in Toronto, where they had raised their family before moving out east. They drove back and forth between residences and, each Tuesday they were in Toronto, opened their home to friends and relatives for dinner and cards.

The game (pronounced you-ker) is a rite of passage for us. I learned to play through trial and error. Euchre has variations, but the central rules are simple. Four players split into teams of two. Everyone gets five cards, and a “trump” suit is determined. Each player throws down one card, face up, in turn. The team with the highest-ranking card wins the hand, or “trick.” Points are earned by the team that wins the most tricks. The first team to reach ten points wins the game. Euchre is addictive and fast-paced. Stuck with bad cards? You’ll be dealt a new set soon enough. And, because games don’t drag on, you can play for as little or as long as you like. It can be excellent for socializing—or, if you join our group, for friendly trash talk. At times, a ballsy move with no chance of winning will earn you a “Lord hates a coward”—a direct quote from my grandfather’s late cousin, Aunt Elsie.

When my mother was battling breast cancer, my grandmother worried that the chemo would make her too sick for euchre. “Mom, I could be dying, and I’d still be playing,” my mother told her. “Oh, me too,” my grandmother replied. In the weeks before my grandmother died, some of us gauged whether she was having a “good day” based on how many games she could get in. The games transpired slowly. No one wanted them to end: we didn’t know which one would be her last. She was eighty-four years old and had smoked for most of her life. Her radiation treatments were only to stop the bleeding in her lungs. We knew it was terminal, but we still couldn’t envision playing without our matriarch at the end of the table.

Euchre night was suspended when she died, in 2014. For weeks, my family felt disjointed. The Tuesday-night crowd checked in on my grandfather and kept him company, but the deck and scoreboard remained in the cupboard. Having moved elsewhere by then, I dreaded coming back to the house. Not seeing my grandmother there was too painful.

When we finally played another Tuesday-night game, the whole euchre gang attended and took extra care to help set out dinner and wash the dishes. Then the cards came out, and I took my grandmother’s seat—sitting there made me feel close to her. After the first few rounds, we began to ease the tension by imitating her. “Dammit,” someone said when a play didn’t work out in their favour. Everyone smiled. For the rest of the evening, we brought up our favourite one-liners of hers, including some she had coined, like, “Shit-a-God-damn.”

It has now been more than four years since my grandmother died. Those who attend the Tuesday-night game continue to do so in the same way devout Christians attend service. We have played through illnesses, arguments, divorces, and death. Euchre has held us together and helped us heal. These days, my boyfriend joins us if he’s free. When my mother learned he played euchre, she told me to keep him around. Just like that, the circle grows.

Jessica Myshrall is a project-and-event coordinator in Toronto.
Tallulah Fontaine