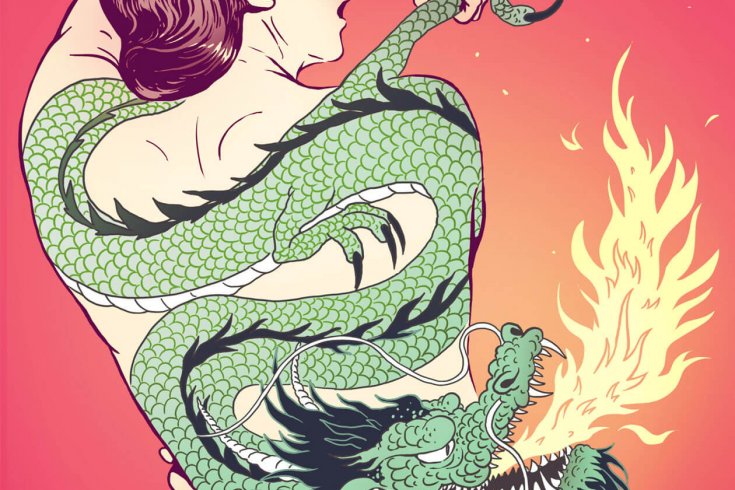 In late 2015, Ana Alves decided to get rid of one of her tattoos: a red rose with green and yellow leaves on top of a black tribal pattern, placed midway up her left thigh. After researching tattoo-removal options, she settled on SpaMedica, a plastic-surgery clinic and spa in Toronto’s Yorkville neighbourhood. In the waiting room, a plush banquette curves to meet a mahogany desk staffed by well-dressed receptionists. A small statue sits in one corner, and the soothing gurgle of a brook emanates from a speaker. It’s almost peaceful enough for patients to forget they’re about to have lasers blasted at their flesh.

This is Alves’s third treatment at SpaMedica. What was once her tattoo is now a swirl of muted pinpoints, slightly more distinct than a colourful bruise. Nadia Hammoud, a registered nurse, starts by injecting lidocaine into the tattooed area with a small three-pronged needle. Once the area is numb, Hammoud uses a laser to trace the tattoo’s outline. The sound of a laser hitting skin is a muted, rapid clicking, not unlike the syncopated rhythm of a sewing machine. The whole procedure is over in twenty minutes.

A tattoo is created by injecting pigment into the dermis, the second layer of skin tissue. The pigment remains concentrated even as the epidermis peels away during healing. In laser tattoo removal, the operator uses a laser beam to break down the ink particles below the skin. Those particles then disintegrate naturally in the weeks between removal sessions.

Laser tattoo removal leaves patients at risk of hyperpigmentation (skin darkening). It can also cause scarring or severe burns. The practice is not regulated by the government or by any professional body, and there’s no way to determine a clinic’s credibility. Health Canada decides which machines can be sold for laser removal, and training courses are included in the purchase. But the only legal requirement for operating lasers in exchange for money is a business licence.

In 2014, eighteen women came forward claiming that a “revolutionary laser-free technology” treatment offered by a Montreal-area clinic, Bye Bye Tattoo, had given them second-degree burns. The women were left with permanently raised scar tissue—in some cases, in an exact imprint of the tattoo the customer had wanted to remove. That clinic filed for bankruptcy, but the Quebec College of Physicians assembled a working group in early 2015 to examine the aesthetic-medicine industry, which also includes cosmetic injections and laser hair removal. In September 2016, Quebec became the first province to develop regulatory recommendations for the industry.

“It’s surprising that there is no current regulation either for doing or removing tattoos elsewhere in Canada,” says Dr. Yves Robert, secretary of the Quebec College of Physicians. “Tattoo removal shouldn’t cause a bigger problem than the one it’s solving.”

More than seven million Canadians have at least one tattoo, according to 2013 data from the Canadian Dermatology Association. Neither Health Canada nor Statistics Canada keeps track of non-surgical aesthetic procedures, the ill-defined category into which tattooing usually falls. But IBISWorld, a market-research company, estimates that in the United States, it’s a $76 million industry, having grown by almost 500 percent over the last decade. And second-hand laser equipment can be bought on eBay or Craigslist for as little as $75.

Stephanie Gorchynski started getting her tattoos removed six years ago. She still has the remnants of what she calls “creepy angels” on her back, and birds on her wrist. When she was in university, in the early 2000s, she got a small tattoo on her back. A few years later, she decided to have it removed and went to a plastic-surgery clinic in Toronto recommended by a tattoo artist. At the time, she didn’t know that painkilling cream or lidocaine is usually administered during removal; all the clinic gave her was a stick to bite down on before they aimed the lasers. It was excruciating. “They’re not supposed to rip open layers of skin. I had severe blisters on my back,” she says.

Gorchynski then tried a clinic that specialized in tattoo removal. They did administer a numbing cream, but the pain was so intense she broke a stress ball and gripped the table hard enough that her nails became lodged in it. Even after this treatment, though, her tattoos showed few signs of fading. She had almost given up when she was referred to Shane Bolton. Bolton, the owner of Toronto’s Fading Fast Tattoo Removal, spent years as a tattoo artist, but the market got increasingly crowded, so he decided to move into removal. He found the laser training course offered with his equipment disappointingly theoretical, so he chose to practise on his own tattoos.

Bolton experimented with settings and motion, seeking the least painful and most effective techniques. “It was a huge learning curve,” he says. He even let his wife try removing a tattoo from his leg. “Some people think I’m a little off. But if I don’t know what it feels like, how do I inflict it on someone else?” His operation grew, and he eventually took on an apprentice. In Bolton’s view, it would be excessive to require formal medical training, but he does think that, at the very least, the industry should mandate apprenticeships.

On september 21, 2016, Yves Robert and the rest of the Quebec College of Physicians published a report outlining fourteen recommendations for the regulation of aesthetic medicine. Among them: only a qualified medical professional should provide laser treatment for any procedure besides hair removal. Certain medical professionals—those who aren’t plastic surgeons, ophthalmologists, or dermatologists—should submit a detailed training plan to the ministry and undergo practical coursework to ensure they can prevent and treat adverse reactions. And aestheticians without medical backgrounds should no longer be allowed to operate lasers.

The recommendations will become law if a government ministry—either health or justice—approve them, and the college met with Quebec health minister Gaétan Barrette in October to initiate that approval process. The Canadian Dermatology Association supports the move toward increased regulation. Its former president, David Zloty, has said it is crucial for public health. And now that Quebec has drafted its own recommendations, other provinces will have a framework to work from when they try to crack down on the unsafe use of lasers for tattoo removal.

Back at SpaMedica, a hard, chalky layer known as “frosting” has formed over the surface of Alves’s tattoo. This is good, Hammoud says, because it means the skin is responding to the laser treatment. In six weeks, Alves will be back for her next session. She doesn’t want to get rid of her tattoo completely. She just wants it to fade enough that she can get another tattoo in its place—one she plans to keep forever.

Maija Kappler (@MaijaKappler) is an editor at Intermission who has written for Maisonneuve and the National Post.
Christina Ung

Christina Ung is an artist who created the new package design for Twizzlers.