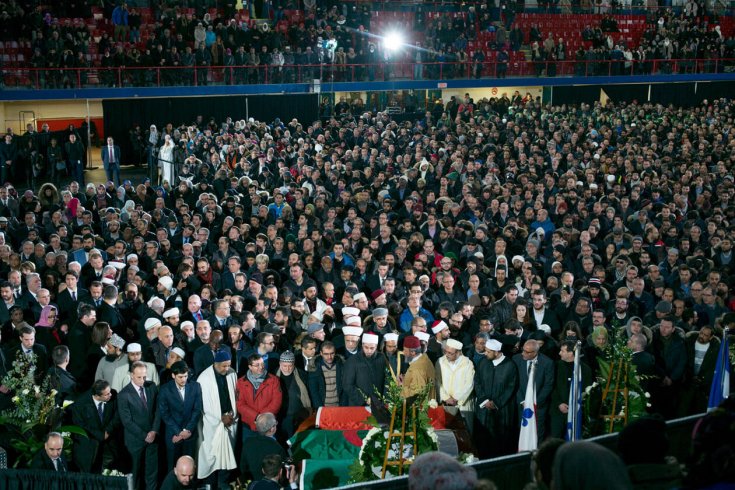 Dignitaries and relatives after performing a last prayer at the end of the February 2 ceremony, held at Maurice Richard Arena in Montreal, in memory of three of the six fallen victims: Karim Hassane, Khaled Belkacemi and Aboubaker Thabti. Photo by Michael Huneault.

Before Alexandre Bissonnette reportedly entered a Quebec City mosque and murdered six people and injured many others, he was an online troll. François Deschamps, a member of a local committee that welcomes Syrian refugees, told La Presse that Bissonnette often posted on the group’s Facebook page, outlining his suspicions of foreigners. On other progressive pages, he derided “feminazis.”

Bissonnette is even said to have visited the Ste. Foy mosque in the days before the attack. Clearly, the alleged shooter’s online hatred and real life violence was blended.

In January 2016, Martin Patriquin investigated the line between online threats and physical violence for Maclean’s. He talked with individuals who had made threatening comments online, and asked if they were planning to act on their rhetoric. Most of the men interviewed chalked up their comments to blowing off steam.

But Montreal-based Larry Langenauer, who caught Patriquin’s eye by talking about shooting Prime Minister Justin Trudeau and Mississauga member of parliament Omar Alghabra, was different. “People are going to resent it, and eventually they will act upon it toward the people whom they feel are responsible,” he said. The “they” he was referring to were politicians, but re-reading the quote in the aftermath of Sunday’s shooting comes with an entirely new, and chilling, effect.

The connection between calls for violence and “acceptable” Islamophobia is at the heart of our current crisis.

For some individuals who aren’t part of a group that is regularly targeted either over the internet or in person, the connection between an online rhetoric and real-world violence is perhaps debatable. But there should be no doubt that the rise in online hatred has created the conditions where real-life attacks aren’t simply rendered more likely—they’re inevitable.

Online hate and calls for attacks on marginalized groups do not exist in a vacuum. The connection between these extreme manifestations and “acceptable” Islamophobia is at the heart of our current crisis.

Mainstream Islamophobia has increasingly characterized our political debates. Kellie Leitch is trying to be the next leader of the Conservative Party by assuming that supporters want their government to target new immigrants. At the Conservative leadership debate in Quebec City, Brad Trost told a room of more than 450 party activists (the vast majority of whom were white) that the “real” threat to Canada is radical Islam.

In Quebec, this kind of Islamophobia has been key to the identity politics debates of the Parti Quebecois (PQ) and the Coalition Avenir du Québec (CAQ). According to the 2006 census, just two percent of Quebec City’s population is non-white. It’s fertile ground for stereotypes and fear to whip up racist sentiment. The Parti Quebecois’ failed Quebec Charter of Values (where “ostentatious religious symbols” became code for hijab, and “Quebec values” became code for ethnic nationalism) was meant to galvanize the province between voters who believe that Islam poses a threat to the province and those who don’t.

In the aftermath of this week’s attack, PQ leader Jean-François Lisée walked back on that previous language and appealed to Quebecers to relax on the identity debates. CAQ leader François Legault, who has tried to fashion himself into a local Donald Trump, denied that Islamophobia even exists in Quebec.

The evidence shows otherwise. According to the Centre de prévention de la radicalisation menant à la violence, there are as many as twenty-five groups in Quebec that could be considered “extreme right.” Extreme right is usually characterized as explicitly racist, anti-immigrant, xenophobic, anti-Semitic, Islamophobic and homophobic. A study published in the journal Studies in Conflict & Terrorism in February 2016 found that there are about 100 extreme right groups operating in Canada. In the bowels of many of these group’s Facebook pages, people celebrated Bissonnette and the mosque attack. Dozens even called for more violence to be committed against Muslims.

Some may dismiss the seriousness of these threats as merely talk. But online right-wing extremism has increasingly been correlated to real-world mobilization. In Quebec, members of anti-immigrant group Soldiers of Odin Canada have organized rallies to decry Islam. They perform “street patrols,” a practice that began in Finland as a way of intimidating immigrants and refugees. One of the Finnish founders, Mika Ranta, has been convicted of assault multiple times and at least once for assault that was racially motivated.

Another prominent group, Atalante, is a neo-fascist, racist organization. One week before the shooting, they put up dozens of posters on college and university campuses across Quebec City in an attempt to recruit white men. On Instagram, they posted an image of some of their members weight training, tagging the photo “Formation Streetfight”—in other words, street-fighting training.

As various extremist groups have grown in prominence, so too have hateful acts. In November 2014, all four of Quebec City’s mosques (including Ste. Foy) were targeted with signs that said “Islam out of Quebec.” Six months earlier, similar stickers were placed on the walls of one central Quebec City mosque.

There was a pig’s head left at the Ste. Foy mosque during Ramadan in 2016, and not long after flyers decrying Islam were placed in mailboxes in a nearby neighbourhood. Quebec City made headlines earlier that April, when local men attacking two Sikh tourists from Toronto was caught on tape. The judge in the case called the actions racially motivated.

There have been other incidents too, like anti-Islamic flyers handed out at a community event in the neighbourhood of Saint-Sauveur and some skirmishes between skinheads and anti-racist activists. Together with the rise in hate across social media platforms, online and real-life forces will continue to build, unless concerned Quebecers refuse to see each expression of hate as an isolated incident. Put another way, in the search for why six men were murdered in a mosque, it doesn’t really matter if Bissonnette was a lone wolf. Everything about how extreme right activists have crafted their message and campaign, and the combination of their online and real-life tactics, led to the horror of Sunday night.

International events, like the attacks in Paris, Nice and Berlin, have also increased a feeling of unease among local Muslims, says Eya Mejri. The twenty-eight-year-old Tunisian woman has lived in Quebec City for two-and-a-half years and says that she experienced incidents that have made her question whether or not she should continue wearing hijab. She was invited to a dinner for women and children at the Centre Culturel Islamique on the night of the attack and decided not to go.

“This has been a very difficult week,” Mejri says in French. She is friends with the wife of Boubaker Thabti, and frequents Azzeddine Soufiane’s butcher shop; both men who died in the attack. She is also friends with some of the victims who remain in hospital.

Mejri knows that there have been individuals who have celebrated the murders online. She knows which kinds of stories published by the news network TVA she should steer clear from when it comes to the comment section. She calls these comments “shocking,” but in the same breath mentions that she doesn’t believe that these comments reflect the opinions of a majority of Quebecers.

Since the Sunday attack, Montreal police have received more than forty-three reports of “hateful incidents,” compared to fifty-five calls for all of 2016. The provincial police force has received 175 reports (these numbers are as of February 2; they keep climbing). On February 1, a man from the Montreal suburb Kirkland was charged for Islamophobic comments he made online. On February 2, a mosque in Montreal had its windows smashed and its walls spray-painted.

It’s broadly accepted that the Internet is an important tool to recruit individuals who are lonely, isolated or looking for somewhere that accepts them. ISIS’s online recruitment tactics have long been considered key to their capacity to recruit people from Europe and North America. It’s no different for white supremacist organizations. And as charismatic leaders such as Richard Spencer, Donald Trump and Marine LePen emerge, hate speech that once would have been isolated in support group-like forums is bleeding into the mainstream and increasingly considered acceptable. A fringe movement that was once hidden away in online corners is now proudly boasting on our social media feeds and marching down our streets.

Police have to take hateful online speech seriously. But, since these are often crimes that need to be reported, individuals need to take online hate speech more seriously, too. They need to screencap, share, and report anything they see that advocates violence against others.

The Ste. Foy shooting also shows that the federal and provincial governments need to dedicate more resources to identifying anti-social, violent behavior in the name of white supremacy. Radical Islam has dominated far too much of the public conversation of extremism. This horrific event needs to mark a departure of the Quebec government’s instant connection of individualized, extremist violence with Muslims, and instead find ways to address white supremacy and treat it as the threat that it is.

For those of us who have paid close attention to the rise in online hatred, watching Sunday night’s attack was like seeing a train approaching from miles away. When it finally arrived, the overwhelming sense of helplessness and inevitability was overbearing.

It shouldn’t take six men murdered in a mosque to wake us out of our complacency; to convince our politicians to tone down the rhetoric; to trigger broad introspection on what a culture of fear and paranoia towards Muslims has done to us all. In the memories of Boubaker Thabti, Azzeddine Soufiane, Khaled Belkacemi, Ibrahima Barry, Abdelkrim Hassane, and Mamadou Barry, we all have a responsibility to resist hatred however we can, and when we see it—whether online or in real life.