When It Comes to Trump, Business As Usual Is Impossible | The Walrus
Skip to content 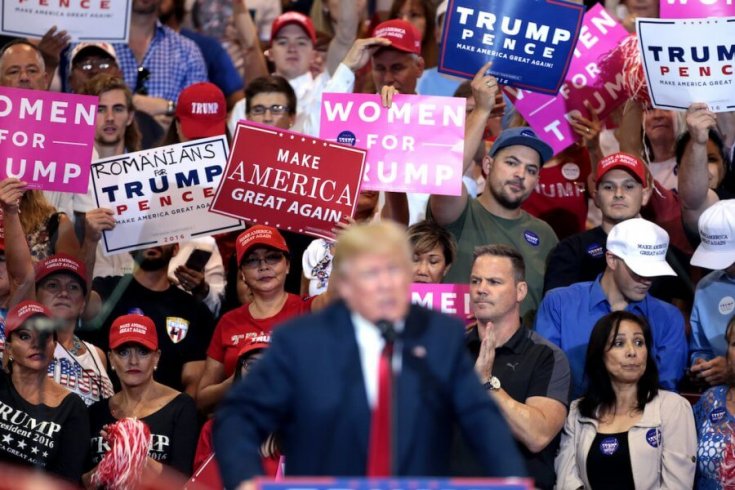 Like millions of others in the United States and around the world, most Canadians underestimated Donald Trump. They didn’t believe he would win the primaries, much less the election. His views were too extreme, his behaviour too full of bombast. He was dismissed as P. T. Barnum on crack. I wasn’t so sure. I was travelling through the US with my wife just as Trump was laying waste to his Republican primary rivals, and it seemed to me his messages on immigration and trade were resonating. After leading Ontario’s provincial government in the ’90s and helping rebuild the federal Liberal government some twenty years later, I know momentum drives votes. Trump had it. Hillary Clinton didn’t.

Once Trump was elected, the conversation shifted to how power would inevitably bring him in line. The legislative power of Congress, the Supreme Court, and the realities of international politics would all provide checks on his behaviour. Even today, after nearly two years of chaos, many still have difficulty absorbing the enormity of what has happened. Surely, we are told, cool-headedness will see us through.

But we are now at the point where we have to reassess the wisdom of these various tactics and stratagems. Just carrying on with business as usual has not worked. Flattery doesn’t work, because Trump’s appetite for it only grows. The Republican Party has not disciplined him. On the contrary, he has taken over the party. The various figures meant to “control” Trump have fallen by the wayside and have been replaced by people who are completely loyal to him. They are there not to give advice but do his bidding. Rex Tillerson is gone, replaced by loyalist Mike Pompeo. H. R. McMaster is out. John Bolton is in. There are, apparently, no more restraints on the president or on those like Stephen Miller, Trump’s senior advisor and the one who reportedly played a large role in the decision to systematically separate migrant children from their parents.

After a lifetime in Canadian politics, I know first-hand the unique nature of our relationship with the US. It is not an easy one. Canadians often feel we know the US, and we see its problems and politics as if they were extensions of our own. We are beginning to understand that America is now a very different place. The insistence on “America First,” the vitriolic language against immigration, and the association of immigrants with crime are not messages we can support or even ignore. The use of the entirely bogus argument of “national security” to slap punishing tariffs on our steel and aluminum exports takes the US down a path of trade lawlessness and bullying that is unprecedented in the post–Second World War era.

If Canada’s well-being was not so tied up with its relationship with the US, it could stand back and enjoy the late-night comics. But that is not the case. We Canadians do not have the luxury of being either bemused spectators or freelance commentators. There is too much at stake. We are economically vulnerable because so many jobs are in industries—like lumber and auto manufacturing—that depend on reliable access to the American market. The integration of our two economies has intensified since the signing of the Canada-US Free Trade Agreement in the 1980s and its expansion into NAFTA in the following decade. If we are denied secure, long-term access to the American market, we stand to lose in two ways: immediate job losses would likely be followed by international investors turning away from Canada. NAFTA allowed Canada to develop a strategy of investment attraction that made a point of emphasizing its advantages as a base of activity in the broader North American market. The threats and uncertainty of the past year have cast a pall on those arguments. Trump’s countermessage is crystal clear—there is no assured base for access to the United States outside his borders.

There have been many times when Canadian and American interests and styles diverged, but rarely has our relationship degenerated to its current state. To take an example I am very familiar with after my direct involvement in earlier trade battles, Canadian lumber has met with resistance in the American market since the early 1980s, not because it is subsidized (an enduring and much repeated myth by both the US Department of Commerce and America’s lumber industry) but because the land from which it is logged belongs to the government rather than a private owner. Every third-party tribunal asked to look at American allegations of Canadian subsidies has ruled in favour of Canada. But Trump’s commitment to protectionism obliges him to ignore the word of international arbitration.

If trade was the only problem, it would be bad enough. But there are issues with the Trump presidency that go beyond economic hardship for Canada. The toxic quality of his administration’s rhetoric and actions on immigration, race relations, human rights, and world events generally make it clear that we have an American government that sees itself as leader of a right-wing populist, nationalist movement, rather than the leader of a coalition of countries and governments that share common values. Trump’s recent attack on German chancellor Angela Merkel’s openness toward refugees, his full-throated support for Brexit, and his embrace of nativism wherever in the world he sees it—these are all reflective of a political strategy that is intended to disrupt. That this leadership is being exercised in an incompetent, erratic, and utterly mean-spirited way does not take away from its goal and impact. This is neither the America, nor the world, we want or need.

In the 1920s and 1930s, both Canadian and US governments tried to avoid another European conflagration, but the outbreak of the Second World War produced the realization that our shared security, as well as economic interests, would require a closer co-operation than we’d ever shared. This not only meant intensifying the bilateral relationship, it meant working together on a new international architecture that would ensure more open trade, shared approaches to security, and a commitment to building stronger global institutions. This was not a friction-free relationship. John Diefenbaker and John F. Kennedy had a strong mutual dislike and a deep-seated difference on defence. Lester B. Pearson and Lyndon B. Johnson signed the Auto Pact, which created a more open border for autos and parts and a guaranteed share in investment and production, but Pearson and Johnson also disagreed publicly and privately on the war in Vietnam. Pierre Trudeau and Richard Nixon disliked each other, and Canada had to fight hard to avoid getting sideswiped by unilateral economic actions, but Gerald Ford pushed for Canadian membership in the G7. Brian Mulroney established strong relations with both Ronald Reagan and George H. W. Bush and convinced enough Canadians that a new free-trade relationship would cement our economic future. And though their personal relationship was strained at best, even disagreement over the war in Iraq didn’t prevent Jean Chrétien and George W. Bush from co-operating on so many other fronts.

This is what has changed. We need to understand that President Trump means what he says and says what he means. He believes that trade is a zero-sum game and that the US has been outpriced and outsmarted not just by us but by everyone else too. He thinks trade wars are “easy to win.” He knows his base has a steady appetite for racism, protectionism, and populism, and he feeds those things to them. He likes and admires strong leaders, like Vladimir Putin, Recep Tayyip Erdoğan, Rodrigo Duterte, and Kim Jong-un and has recently shown more respect and affection for a North Korean dictator who starves his people and kills his opponents than for any of his Western allies. The only saving grace may be the profound incompetence of Trump’s administration. But bear in mind, Trump’s team could get better at actually achieving what it is it wants to do.

The most recent fiasco—the forcible separation from their families of thousands of migrant children seized on the US border with Mexico—is a case in point. This act of desperate inhumanity was met with a barrage of negative publicity unmatched by any other domestic act of the Trump administration (and it reached fever pitch the same week the US withdew from the UN Human Rights Council). The blowback will likely continue until families are reunited. But Trump will just as likely keep tweeting and upping the anti-immigration rhetoric, for the simple reason that he is in the fight of his life and has nowhere to go but to his base. He doubles down because he only has one pitch, aimed straight at the head of whoever gets in his way.

This is why business as usual is impossible. We need to stop the charm offensive and meet every unjustified threat with measured action that will force some in the Trump administration to listen. To borrow John F. Kennedy’s famous phrase, “Let us never negotiate out of fear. But let us never fear to negotiate.” It is as difficult a moment as we have ever faced as a country. The US president does not care about us. He has told us it’s America First, and we know from his behaviour it’s Trump First All the Time. Our prime minister understand that, as a head of government, he can’t tweet like a maniac. He has to choose his words and his moments carefully. But it’s time we understood just how far apart our two countries are and act accordingly.

This is why Trudeau is right to rally Team Canada—the country’s business and labour leaders, provincial politicians, and a broad alliance of political and economic interests—in engaging our American partners beyond the Trump administration to help them understand their future is as much at stake as ours. Pinpoint the states, industries, and companies most affected by the tit-for-tat tariff skirmishes. Build alliances internationally in favour of multilateralism and the rule of law. Negotiations will happen, and concessions will be made, but we need to present an alternative view to the administration in private as well as in public. We need to define our ground and keep defending it as surely as we work whatever back channels still exist. This is not about anyone’s electoral future. It’s about the future of our country and our world.

Bob Rae is a partner in the law firm of Olthuis Kleer Townshend and Professor of Public Policy at the University of Toronto. He served as Ontario’s 21st Premier and as interim leader of the Liberal Party of Canada.