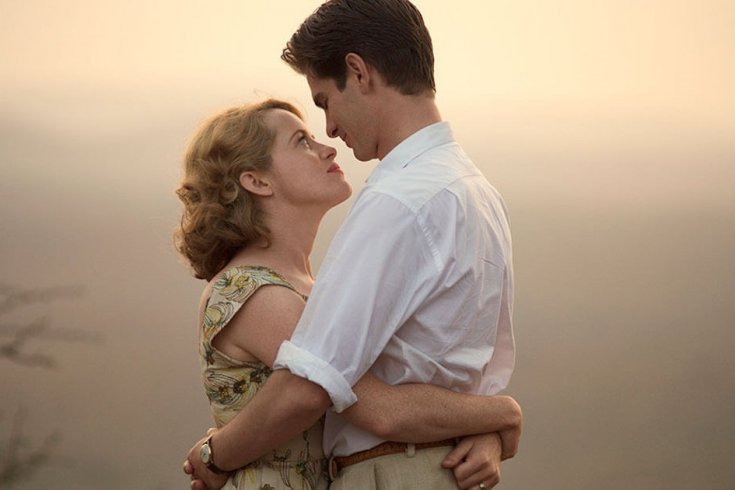 A still shot from the film Breathe Courtesy of TIFF

In an early scene in Stronger, the recent film adaptation of Jeff Bauman’s memoir about his recovery from the Boston Marathon bombing, the hero has just returned from the hospital. As Bauman, played by Jake Gyllenhall, looks at the care packages and thank-you letters that crowd his mother’s home, his father sheepishly tells him that he’s “kind of become a symbol to a lot of people.” The day of the marathon, Bauman had been standing a foot away from one of the bombs, waiting for his on-again, off-again girlfriend to cross the finish line. After the blast, he became one of the most recognized survivors of the attack: a grisly photo of him went viral, his hair ashen and his legs shredded as a stranger whisked him away from the blast site in a manual wheelchair.

Stronger, which premiered at the Toronto International Film Festival last week, provides a gritty account of Bauman’s rehabilitation—including the intricacies of prosthetic fittings and re-sensitizing limbs. But as the quote from his father suggests, the film also functions as a statement on how disability is regarded by the world. For those close to him, Bauman’s struggles are a reason to ponder the relative fragility of their own lives. For viewers of the film, his story is also a portrait of American resilience. What Stronger doesn’t address, unfortunately, is what Bauman’s disability means for him. The film follows in the footsteps of movies like The King’s Speech and The Theory of Everything, which met critical success but were described in the disability community as a kind of “inspiration porn”—they depicted disability as something that great men transcend and weaker ones merely live with.

The same struggle to decode the actual lived experience of disability can be seen in Andy Serkis’s Breathe, also shown at this year’s TIFF. Breathe is a film about Robin Cavendish, who was diagnosed with polio in 1958 and became an activist for the disabled, fighting to get them out of institutions and into the world through wheelchairs. Breathe and Stronger could scarcely be more different in terms of their stories’ locations, historical scope, and socioeconomic milieus: one is a snapshot of contemporary working-class Boston; the other is a globe-trotting, decades-spanning romance. Yet both films share a nagging preoccupation with making their protagonists’ lives after injury and illness palatable to the hypothetical non-disabled viewer.

The main characters are portrayed sympathetically, as are their caregivers and the people around them. But the movies fall prey to the inherent weakness of the biopic: its inability to allow a disabled person’s life to simply be what it is. The things that matter most to actual survivors and people with chronic health conditions—universal accessibility and health care coverage, for example, subjects that are relevant to the current political climate—become mere side notes in grander stories of resilience. And because of that, the movies lose any value in portraying a disabled person in the first place.

Breathe is the standard prestige picture, a love story with a stacked lineup of Oxford-trained thespians and Olivier Award nominees. Its golden-hewed shots of the English countryside wouldn’t seem out of place in a Miramax Oscar nominee from the 1990s. Andrew Garfield plays Cavendish, a posh British tea broker, as an affable man who struggles to deal with an early diagnosis of polio in his late twenties. Though his days lounging on lawn chairs, playing cricket, and working in Africa are no doubt over, Cavendish wills himself to live—first in a hospital bed and later in an experimental wheelchair outfitted with a portable breathing device—because his family, especially his wife, Diana, insists he see his son through childhood.

The movie’s focus on the shared experience of a disabled person and his non-disabled partner admittedly yields some lovely images, like the domestic tableau midway through the film where Diana reaches across her sheets to hold her husband’s hand, their beds pressed together like those of an average old married couple—despite the medical ephemera surrounding Cavendish’s bed. But the film’s insistence on translating Cavendish’s impairment through the determined eyes and tired platitudes of his wife makes him, at best, a bemused side character in his own story. Cavendish becomes a screen onto which other people can project their insecurities about what exactly constitutes a life worth living. And Serkis’s characters launch into endless cliche-ridden monologues about Cavendish’s capacity to inspire. (A bedside visitor muses in the film, for example, that Cavendish makes those he touches feel “stronger” afterward.) More than the prosaic filmmaking, it’s this treatment of disability as a bromide generator that makes Breathe a wash.

Cavendish’s own perspective about polio is only briefly explored, and superficially at that. It’s clear he is disappointed knowing that his life, once full of casual travel, is now dependent on medical equipment that keeps him tethered to one place. But the film omits Cavendish’s experience of the early days of his diagnosis, focusing only on Diana’s adjustment to her new life while her partner languishes in a hospital bed, unseen. Despite the film’s promising title, it provides absolutely no clarity as to what it feels like to breathe through a mechanical apparatus that could break at any moment.

More fatal, Serkis skates past the socioeconomic story that is so critical to Cavendish’s biography: in the absence of state-wide social support networks that could provide accessibility and integration, it fell to wealthy disabled individuals with inventive friends to chart their own bold, new path alone. Breathe is debuting in a moment when hard-fought laws like the Americans with Disabilities Act are under siege. Increasingly, disabled patrons, not governments, are expected to hold businesses accountable for ensuring that their facilities are accessible. In Canada, after countless years of hard work by activists, we’re finally beginning to have conversations around new accessibility legislation. Stories of people like Cavendish are an important part of disabled history. In that context, Breathe’s focus on Cavendish’s family and friends is an embarrassing missed opportunity. Given the perfect character for a movie about the relationship between disabled people and the government, Serkis turned Breathe into a simple, generic love story.

On the surface, Stronger would seem to be an antidote to Breathe’s syrupy love story. The movie feels most vivid at its most specific, when it trades Jeff Bauman the survivor for Jeff Bauman the noncommittal Costco deli worker with the grease-stained shirt, who’d rather sulk at a dive bar than pick up his girlfriend. As a story about the uneasy recalibrations—to life, to love, and to the body—that being a disabled survivor requires, Stronger is surprisingly resonant. It pays attention to the minutiae of adapting to an inaccessible world, taking pains to catalogue Bauman’s fraught renegotiation of familiar spaces like bathrooms and staircases. The movie treats his progress from hospital bed to wheelchair to prosthetic limbs as a continuum rather than a series of steps toward a “better” self—as a weaker film might have done. The director, David Gordon Green, also acknowledges that Bauman’s status as the public face of “Boston Strong” is frequently undercut by his private insecurities and his dependence on medications and unreliable family members.

What, then, are we to make of the film’s rapid descent into a hoary melodrama about how Bauman is grounded by his relationship with his girlfriend—who at one point lectures him about how tough life can be for partners of newly disabled people? The film, after starting with such promise, eventually settles on the conventional narrative of a man who is humbled by what his wounded body means to others. The focus is on other people, not on the disabled man himself.

In the film’s last moments, Bauman is about to throw the first pitch at a Red Sox game in Fenway Park. He is seated in his wheelchair in the foyer and surrounded by a crowd of Bostonians—ordinary baseball fans eager to share their stories of trauma with someone who might finally understand. The image is evocative, to be sure: the survivor presented as an antenna for other people’s pain. It’s confirmation that in the movie world, disabled people are best understood as symbols: they remind viewers that they themselves are not disabled.

Angelo Muredda is completing a Ph.D. in Canadian fiction at the University of Toronto.