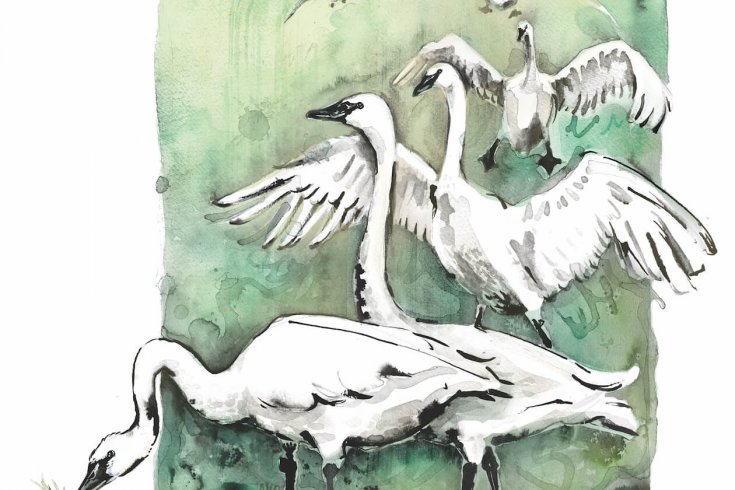 John vanden dungen plants his boots on the edge of a harvested cornfield. Ball cap perched on his head, he explains to a busload of conservationists, biologists, and birders how he’s trained the local population of trumpeter swans to stay off the twenty acres of perennial rye grass behind him. Vanden Dungen is a dairy farmer. He’s been tending this patch of Vancouver Island since 1977. And, yes, you heard right. He said “trained.”

The trumpeter swan, with its nearly eight-foot wingspan, is the largest waterfowl in the world. With its snow-white feathers and jet-black bill, legs, and feet, it’s arresting. But for Vanden Dungen, having hundreds of swans swoop in is like hosting a bush party gone awry. If left alone, they go straight for his rye field, which provides crucial forage for his 160 milking cows. But the wild grass that pops up among his chopped-off corn stalks? That’s fair game. “We chase them off with quads,” Vanden Dungen says, referring to all-terrain vehicles. “But we don’t bother them on the cornfields. They seem to be getting the message.”

The audience chuckles. But the tension between trumpeters and the island’s roughly forty-four dairy farmers is serious business. The tour group that Vanden Dungen is addressing is made up of attendees at the Trumpeter Swan Society’s 2016 conference. The society, which draws members from across North America, understands that without the dairies, swans are sunk. The trumpeter was once a popular food source. Its skin was used to make powder puffs, and its feathers were in demand for quill pens. By the early twentieth century, the bird had been hunted to near extinction: in 1933, there were seventy-seven known swans breeding in Canada, and fifty in the United States. Thanks to intense conservation measures, the federal status of trumpeters has changed from “special concern” to “not at risk” in fairly short order. There are now 63,000 of them, about 24,000 of which migrate along the Pacific coast. And one of the most significant wintering grounds for this population? Right here, on Vancouver Island.

In the world of species recovery, the trumpeter swan is a good news story, one of the best. But resurgent wildlife often ends up competing with people for resources. Think elk in Banff, deer in Victoria, or raccoons and coyotes in urban Toronto. We want struggling animals to thrive, but if we’ve developed, occupied, or damaged their original habitat, what then? In some areas, up to 90 percent of the wetlands and estuaries that once belonged to trumpeters have been destroyed by human activity. Those that remain have been depleted.

Enter the protein-rich grasses on dairy farms, served up on vast groomed fields. What trumpeter wouldn’t avail itself of this bounty? It’s partly because they’ve discovered the benefits of dairies that swans have recovered: after feasting, they return to their Alaskan breeding grounds in peak condition. An estimated 85 percent now depend on agriculture for sustenance.

Several conservation organizations are working to replenish wetland habitats, especially those adjacent to farms, in the hopes of diverting animals and birds from crops. But some wildlife biologists argue that it’s unrealistic to expect species such as trumpeters to return to estuaries: they long ago lost the “flock memory” of their original stomping grounds, and would have to work harder in estuaries for more meagre meals. Why change a routine that’s serving them so well? What’s needed, instead, is creative thinking: a reevaluation of how we see the natural world, and our place in it. We need to learn to share.

It’s a radical idea. But before such a change can catch on, farmers themselves need convincing—a lot of it.

Leading today’s tour is Graeme Fowler, a farmer who has been dealing with the impact of swans on farms for more than a quarter century. His opinion of the bird lies somewhere between “majestic beings” and “field maggots.” Fowler understands first-hand why farmers talk numbers—how many trumpeters they can be expected to support, how many society even needs. He spent years helping farmers protect their crops by chasing swans off with trained dogs, scaring them with flags or gunfire. Nowadays, the strategy he advocates is quite different.

Fowler manages a BC Ministry of Agriculture compensation program that refunds farmers 50 percent of the cost of seeding a harvested field with winter wheat or wildlife-friendly grass—such as Italian rye, oats, and barley. Called cover cropping, it’s a more deliberate version of Vanden Dungen’s scheme. It provides food for wildlife while steering it clear—to a point—of crops the farmer wants to protect. It also reduces erosion and adds nutrients to the soil, cutting fertilizer costs. The farmer is on the hook for about $75 an acre, but Fowler says that the benefits for the soil, and the reduced damage elsewhere on the farm, make the idea worthwhile. Twenty farmers have signed on this past year, collectively planting 1,000 acres of lure crops. When these farmers see a field fill with birds, they should—in theory—relax and let them be.

Is it possible that this type of practice will one day be routine—that a farmer’s sense of duty will extend beyond the potato haul or the litres of milk offered up by cows? Delta Farmland and Wildlife Trust is betting on it. Based due east across the Salish Sea, on BC’s mainland, the trust is a non-profit made up of farmers and conservationists in equal measure. It has spent nearly twenty-five years testing its theory that a shift in our approach to agriculture is not only worth imagining, but also feasible—at least on a local scale.

The Delta Trust operates on the principle that with adequate investment from governments, conservation groups, and farmers themselves, agricultural lands can indeed function as wildlife habitat. Former program manager Christine Terpsma—an agrologist and, until recently, a dairy farmer—gave Trumpeter Swan Society conference-goers the lowdown on the trust. Thirty to forty years ago, she said, Delta farmers also felt a high level of frustration: farms were losing forage crops to wildlife.

All that has changed. Beginning with pilot projects in the early 1990s, measures have been taken to make agricultural land in Delta more welcoming to native fauna. With the help of local farms, the area is now one of the most significant habitats for wildlife in the western hemisphere. In Delta, the agriculture is diverse—from cranberries to beans—as are the hungry creatures it attracts. In addition to 3,000 acres of cost-shared cover crops, the trust also supports more than 500 acres of grassland set-asides and over twelve kilometres of hedgerows and grass margins—all wildlife-friendly digs. “Our programs are not static,” Terpsma stressed. “We continually ask farmers, ‘What do you need to make farming more viable’?”

Back in the Cowichan Valley, farmers are still adjusting to their own shift. Oliver Balme, who runs a 200-acre dairy farm near Vanden Dungen’s, is part of the group that enrolled in Fowler’s pilot project. A singular sight in shades, a wide-brimmed hat, and a large rain jacket, Balme has managed to seed a cover crop exactly twice. The scheme was great, he says, until the swans gobbled up his offering and shifted to the rest of his field. You can do your utmost to tempt them, but you can’t control what swans do once they alight. One farmer jokes that he posts directional signs: Swans, This Way.

It’s true: cover cropping is a slog—extra work post-harvest, when stress is high and rains may come in heavy and fast, flooding a field before it’s prepped for planting. If you have the right equipment, however, the inconvenience can be offset by seeding earlier in the season, before the main harvest. And, of course, swans do provide some service, eating leftover plants and waste vegetables. Cover cropping is still one of the better options, Fowler contends. “The idea is to get them trying it before the money runs out,” he says, referring to the compensation provided by the BC Ministry of Agriculture. “And if society decides to support wildlife on farms, then the funding may not dry up.”

Four early arriving trumpeters soar overhead, prompting oohs and aahs from the tour group. Fowler and Balme are not immune to the awe the moment inspires. But the birds in the air also remind them that hundreds more are on their way—and migrating, understandably, can make a bird hungry.

Aimée van Drimmelen is a multidisciplinary artist based in Victoria. Her clients include Reader's Digest Canada, the NFB, and the Boston Globe.