Trudeau’s Task: Managing the Ego of an Agitated President | The Walrus
Skip to content 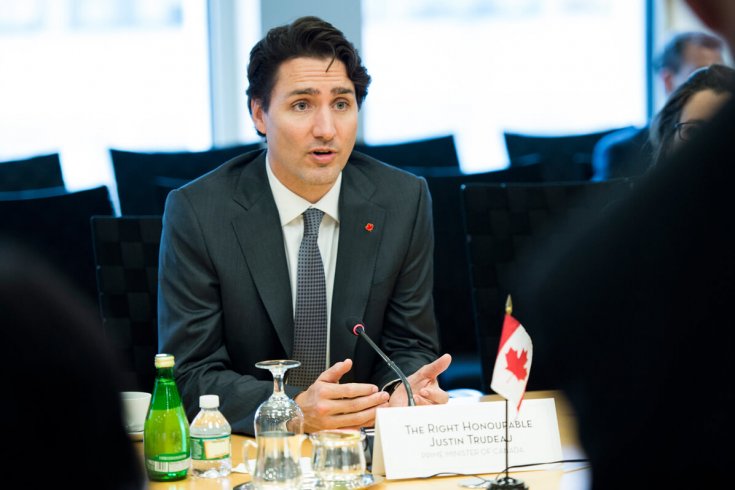 Monday’s meeting with Donald Trump will not mark the first time that Justin Trudeau has met a Republican president. When Trudeau was nine years old, Ronald Reagan paid a visit to 24 Sussex. “My father introduced me and suggested that the three of us relax in the sun room before the two leaders had lunch,” Trudeau recounts in his lucid and elegantly written 2015 memoir, Common Ground.

Reagan smiled warmly at me as we sat down and asked if I’d like to hear a poem, which made my father cock his head with interest. [Pierre] loved poetry and often assigned us verses to memorize from works such as Racine’s Phèdre and Shakespeare’s The Tempest. But Reagan had different tastes. Instead of classical verse, he launched into Robert Service’s “The Shooting of Dan McGrew”:

A bunch of the boys were whooping it up in the Malamute saloon;
The kid that handles the music-box was hitting a jag-time tune;
Back of the bar, in a solo game, sat Dangerous Dan McGrew,
And watching his luck was his light-o’-love, the lady that’s known as Lou

No one will confuse Robert Service with the Bard of Avon. But like Reagan himself, Service was a gifted storyteller who knew how to spool out a good schoolboy yarn. While Trudeau senior wasn’t taken in by Reagan’s cowboy-poet shtick, Justin remembers being impressed enough to commit Dan McGrew to memory, along with at least one other Service masterpiece, “The Cremation of Sam McGee.”

In the age of Trump, it’s amazing to think that we once regarded Reagan as a low-wattage bulb: The mere fact that Reagan was able to memorize a substantial poem of any type suggests that he was head and shoulders above the current President—who, according to a ghostwriter who once spent many months with Trump, didn’t seem to possess a single book (except possibly an unread volume of Hitler speeches, entitled My New Order).

But when he meets Trump, Justin Trudeau would do well to remember the good manners of his father, who remained the embodiment of diplomatic poise during Reagan’s visit, and even thanked his visitor (non-ironically) for his poetic performance. Though there are plenty of leftists and Canadian nationalists who would love to see Trudeau posture defiantly against Trump, or even seek to humiliate him during their meeting in Washington, Trudeau should resist the temptation to indulge in any grand gesture. He would gain a few days’ worth of accolades on Twitter. But Trump likely will be the US President for another forty-seven months. Around $900 billion in goods and services are traded between Canada and the United States every year. The damage that Trump could do to us during this period with a few strokes of his pen is beyond calculation.

As recently as a month ago, we might have expected a Trump-Trudeau meeting to feature urgent Canadian entreaties over the fate of NAFTA, or trade policy more generally. But the prospect of Trump succeeding with an ambitious early gambit in this area now seems less likely. Much of his attention seems focused on bizarrely petty issues, such as which stores peddle his daughter’s clothing line. Republicans can’t even figure out how to dismantle Obamacare, which was supposed to be their number-one priority. Gutting NAFTA wouldn’t be any easier.

In fact, for all the massive differences in worldview between Trudeau and Trump, my prediction is that this first meeting between the two men will feature little except polite pleasantries on both sides. In the past, the gulf between Canada and the United States was marked by a cluster of technical issues that had to be resolved, such as acid rain, softwood lumber, missile defence, beef exports and border security. But the differences between Canadian and US political culture today are now so vast as to be essentially beyond productive human discussion.

For instance, the most pressing issue facing the planet right now is climate change. But can one imagine that wise words from our prime minister will discourage Donald Trump’s belief that global warming is a “hoax”? Barack Obama, George W. Bush, Bill Clinton, George H. W. Bush and, yes, Ronald Reagan, were largely rational men who could be reasoned with. Trump, on the other hand, is a conspiracy theorist and cable TV addict who gets his news from fringe web sites and FOX News blowhards.

I predict Trump and Trudeau will be all smiles when they finish their Monday meeting. Unhinged as he may be, Trump likely realizes that his angry outburst at his Australian counterpart last week made him a laughingstock on at least two continents. And even among the lowest run of American populist xenophobes, there is little currency for Trump in going after Canada: According to a recent YouGuv survey, Republicans are no less admiring of our country than are Democrats. (Respondents from both parties placed Canada as the world’s second most admired foreign nation—with Democrats putting Britain at number one, and Republicans favouring Australia.) Trump always is most effective at riling up his base when the people he targets aren’t white—Black activists, Mexicans, Chinese, Muslim migrants. Canada just isn’t brown enough to attract the hatred of Trump’s core followers.

What would make me proud, as a Canadian, is if Trudeau staked out the high ground with Trump, as Germany’s Angela Merkel did when Trump won the election in November.

“Germany and America are connected by values of democracy, freedom and respect for the law and the dignity of man, independent of origin, skin color, religion, gender, sexual orientation or political views,” she said in a message congratulating Trump on his victory. “I offer the next President of the United States close cooperation on the basis of these values.”

“On the basis of these values” are the key words here—for they connote a spirit of hope that we can yet bring out Trump’s better angels. Trump’s own behaviour provides scant basis for supposing this, of course. But the conventions of democracy require that a true statesman persist in such hope nevertheless.