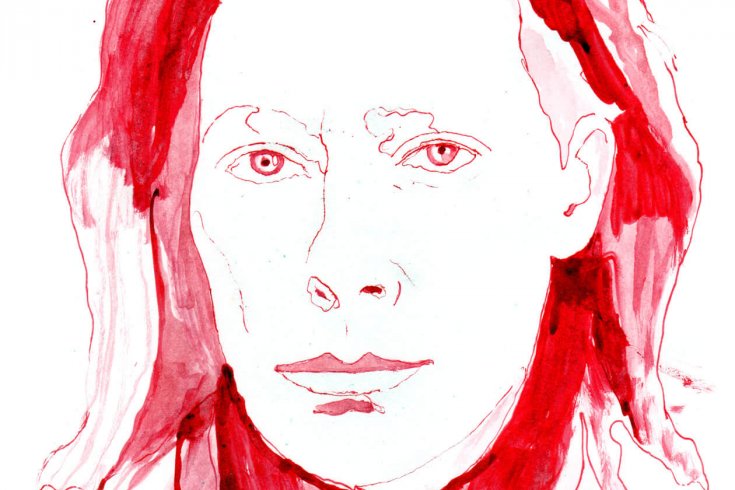 Emma richler walks toward me on a cool and foggy London morning. Trim and tidy in a dark blue coat, she wears crooked spectacles and a pair of sensible brown oxfords. At fifty-five, the novelist is a perfect mix of both her parents—tousled and professorial like her late father, Mordecai, with the gamine, sylph-like grace of Florence, her mother, a former model. At Richler’s side is a large, silent greyhound, whom she introduces as Nico, “after Niccolò Machiavelli.” He’s a retired track racer, she explains, a former champion. He came with the name.

We are standing outside Richler’s favourite Camden café, a tiny hole in the wall rammed to the barn beams with caffeine addicts. Inconveniently, I have brought my newborn baby along for the interview, so we have a stroller and a large canine between us. I suggest we go somewhere else to find more space, but Richler, who is serious about her coffee, won’t have it. She slips inside, and in a moment, the owner is clearing a spot for us in the back where we can have a bit of privacy. Silky espressos appear in thick ceramic cups as Richler kibitzes with the staff, all of whom seem to know her well. This is, after all, the neighbourhood where she has lived for nearly twenty-five years. Camden Town. A bustling, slightly ragged patch of north London famed for its tourist market full of bong pipes, as well as pubs that the late great Amy Winehouse once tumbled out of.

It’s impossible not to feel the romance of the place while reading Richler’s ambitious new novel, Be My Wolff, which is set mostly in and around these parts—depicting them not only as they are now, but the way they once were 200-odd years ago. “Dickens had his first address right around the corner from here,” she says once we have settled into our chat. “Somewhere buried under some mesh wire is a brown plaque. This would have been all fields, mostly. I’ve always felt that I walk in his steps.”

“There were definitely days when I thought, ‘I’m going to die writing this novel,'” Richler says. “My agent actually did die.”

Richler often says stuff like this—dreamy pronouncements that would sound precious or downright weird coming from anyone else. But there is something about her, a winsome, out-of-time quality, that makes it plausible, even charming, when she describes her craft with terms borrowed from a Romantic poet. Characters’ voices are “insistent,” and her writing, she says, “is not a choice, but a need.”

Be My Wolff follows the lives of Rachel and Zachariah Wolff, a pair of star-crossed lovers living in contemporary Camden. They also happen to be adopted siblings. As the young couple attempt to make a life together despite the disapproval of their family, Rachel becomes increasingly obsessed with constructing a history for Zach, who is a former boxer, her “dream bareknuckle boy.” What ensues within the novel are several intertwined stories—most of which take place in Rachel’s rich imagination. She ruminates on everything from Zach’s imagined Victorian forefather—a pugilist and drinking mate of Dickens—to Russian Hussars duking it out during the Napoleonic wars.

“This boxer character kept appearing to me, sometimes in dreams, the way he does for Rachel,” Richler says. “Then one day, I stumbled into this exhibition at the British Museum. London 1753. And I kept going back and back. I went four times. I didn’t know why, but I thought, there’s something here. Then suddenly these two characters emerged—Rachel and Zach.”

The novel, Richler’s third, took twelve years to write, and the effort left her flattened. “It’s been a long, obsessive ride,” she says. “There were definitely days when I thought, ‘I’m going to die writing this novel.’ My agent actually did die.”

Her first two books—Sister Crazy (2001) and Feed My Dear Dogs (2005)—chronicled the interior life of Jem Weiss, a juvenile narrator and observant middle child in an eccentric family of five children not unlike Richler’s own. Be My Wolff, however, is a feat of pure invention—one that does not invite biographical comparisons. Reading it feels a bit like peering at a literary palimpsest—there are layers upon layers of characters, folktales, and history to sift through. At times, the book can be disorienting, even disconcerting, but ultimately the tapestry Richler weaves is so vivid and full of detail that one ceases to mind the confusion of places, people, and periods and simply lets the story spool out.

In many ways, the book is a love letter to London’s urban ecosystem. In Rachel’s novel-within-the-novel, there are digressions on the lives of rats, foxes, and screaming seagulls—Camden, being on the canal system, is full of such creatures. “The sound enters your dreams,” Rachel tells Zach of the crying gulls, “floods the brain, changes the scene, takes me straight to sea!”

This city is the closest thing to home Richler has known. It is where she was born and spent half of her childhood before her family relocated to Montreal in the early ’70s. Richler had her early education at Villa Sainte-Marcelline, an all-girls’ convent school, and then briefly studied French literature at the University of Toronto. She later continued her education in the south of France before training as an actress at Circle in the Square studio in New York. During her twenties and early thirties, she worked as an actress in British theatre and television, but was unsatisfied. “The less I wanted it, of course, the more parts were coming my way, and I remember thinking, ‘This is not your life—this is not what you’re meant to be doing,’” she says.

Richler took her face out of the casting directory and quit, picking up some publishing work to pay the rent while working on her first book. Her agent at the time couldn’t believe it. “If you’re doing okay and you quit, they think you’re either pregnant, dead, or crazy,” Richler explains.

By then, Richler had permanently settled in London. “There was something about the gravitas of the place. The stones and the streets and the history,” she notes. Her parents also kept a flat here for many years, across town in the much tonier Chelsea. Before her father died of cancer in 2001, she would occasionally meet him for a drink. “But we would never talk about writing,” she says. He simply couldn’t bear it.

Be My Wolff is a kaleidoscope of Richler’s obsessions. The character of Zach, a magical and charismatic orphan, in many ways reflects Richler’s persistent fascination with her mother—a woman she describes as a foundling (she was born in Montreal and adopted by a British couple), as well as her muse.

Above all else, though, it is the cultishness of siblings that Richler seems drawn to again and again. “I think the intensity that can arise in family relationships and the special languages [that families develop] have always fascinated me,” she says. “[Siblings in particular] do this all the time to protect ourselves from horror and despair.”

Richler herself is a middle child—the lone literary novelist in a family of male writers (her brothers Daniel, Noah, and Jacob are all accomplished journalists in their own right). “The boys always said they were going to write,” she says. Richler, on the other hand, didn’t rush into it. “I just felt there were too many books on the shelves, and I didn’t want to do it unless I was completely compelled.” What changed? Richler says that after she grew up, she wanted to achieve human connection through the art of fiction.

But for her brothers, she says, it was different. Writing seemed almost an act of coming of age. “I never had that,” she says.

When speaking of her siblings, Emma Richler is generous and outwardly uncompetitive. But the Richlers have always been affectionate with each other in print. Writing for this magazine in 2010, Noah described a conversation in which he and his parents discussed whether Sister Crazy should have been published as fiction or memoir. As Noah embarked on a rather longwinded defense of fiction as “the mere arrangement of experience into a story,” his father cut him off with a wink. “But don’t worry,” he told his son. “You come out looking pretty good.”

At the mention of her dad, Richler looks as if she might tear up. “I miss his wisdom; I miss the weight of him. I think there are very few serious voices today that you listen to immediately. He had a presence, and when he had something to say, it was just beautifully encapsulated.”

Despite Richler’s admiration for her father, her own literary career has proved different from his. Mordecai was an active public intellectual, political commentator, and satirist, churning out a stream of columns and articles in addition to novels. His daughter is a purist who has laboured for years in the unremunerative world of literary fiction to the exclusion of all else. Now, she says, having driven herself into debt finishing her latest novel, it’s “time to be practical and make some money.” Maybe, she muses, it’s time to take up teaching.

Economics aside, a simple existence seems to suit her. After growing up in a big home surrounded by people and happy chaos, she has chosen a quiet life in a small flat, working every day and taking long walks with her dog. It’s a happy place, but it wasn’t always the plan. After finding out in her thirties that, for health reasons, she probably wouldn’t be able to have children, Richler recalls her father saying, “Oh, well, you’ll have book babies.” Since then, Richler has had a few relationships (or “attachments,” as she calls them) with people who were unavailable at the time. “I’ve had a couple of sadnesses that way,” she says of past love. “Now I know there’s just no way I can be with anyone unless it’s just absolutely right.”

Despite her wistfulness, Richler is skeptical that she would have had the temperament to “have it all,” even if replicating her own big noisy family had been an option. “The older I get, the more I do think it’s different being a male writer,” she says. Of course it is, I tell her. It’s called having someone else to raise your children.

“I couldn’t do that, and therefore I wouldn’t be able to write,” Richler says rather urgently. “And that is a cost too great.”

Leah McLaren (@leahmclaren) is a London-based political correspondent for Maclean's.