What Happened to Celine Dion’s Wardrobe? | The Walrus
Skip to content 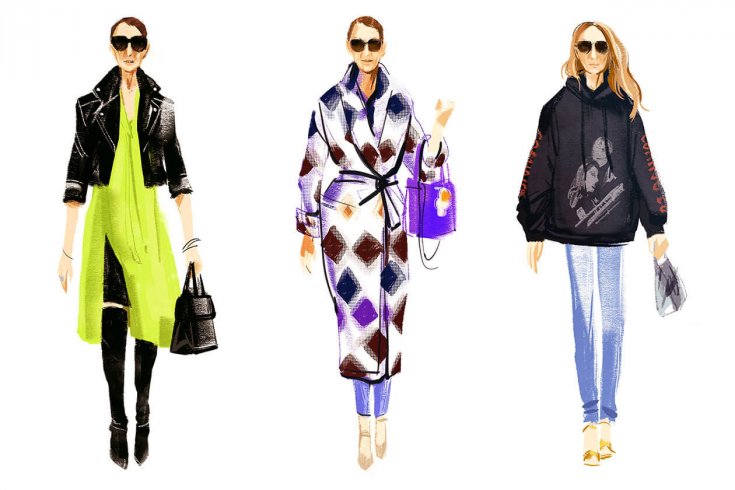 Celine Dion is a five-time Grammy winner, a two-time Oscar winner, a Companion of the Order of Canada, and one of the highest-grossing musicians of all time. But one distinction she hasn’t managed to achieve, until recently, is fashion icon.

In recent weeks, Dion’s public appearances have featured looks that varied wildly in their particular style—the one thing they have in common is that they are all incredibly, undeniably dope. One day she’s looking like a prim Jackie O in head-­to-­toe kelly green Gucci, the next day she’s rocking an oversized hoodie by Vetements (the Parisian designer that flagrantly exploits the border between couture and thrift), screenprinted with the movie poster from Titanic. These have all earned her the approbation of the inside fashion community online, and a nod from the high arbiter of fashion, Vogue.

Until relatively recently, of course, Dion was viewed by most people outside her core demographic as irredeemably uncool. New York magazine once called her “an overemoting schmaltz-­bot who has somehow managed to convert the ethos of Wal­Mart into sine waves and broadcast them.” It has been more than a decade since her last memorable single, 2003’s “I Drove All Night.” Las Vegas is where careers go to die, or at least to become preserved in amber, and Dion, it seemed, was set to live out her career as a nostalgia act for some of the most reviled karaoke tunes of the 1990s. In 2007, stalwart Canadian music critic Carl Wilson wrote Let’s Talk About Love: A Journey to the End of Taste, a brilliant treatise on why people like the music they do that managed to salvage Dion from the depths of irony. Yet even his sympathetic take on the icon was borne from grappling with a palpable dislike for her disturbingly earnest love songs.

And so it seems unlikely that Celine would end up becoming accepted—even revered—at the famously exclusionary altar of high fashion, and yet that is exactly what has transpired, and rapidly too. Just five months after the death of her manager and husband, René Angélil, she reappeared at the Billboard Music Awards dressed like a life-­sized Oscar statue in a gold waterfall gown by the relatively unknown Russian designer Valentin Yudashkin, and vertiginous Saint Laurent pumps. A couple of weeks later, after announcing that she would begin to helm a lifestyle brand to include activewear, beauty products and home decor items, Dion touched down in Europe to perform sold ­out shows. Within the next few days she was snapped wearing a highlighter­ yellow Balenciaga dress underneath a $5,000 Saint Laurent motorcycle jacket, fierce leather pants, and a sweeping floor-length red leather coat—the latter by Kanye West’s favourite fashion label, Off-White by Virgil Abloh.

To date, Dion’s most memorable style moment had been the 1999 Academy Awards, where she topped every single Worst Dressed list by wearing a backwards white suit with baggy pants and a matching fedora by Christian Dior. Paired with bug-eye sunglasses, the look was vaguely extraterrestrial. It was also off-script for Dion, who had seemed until then content to project herself as little more than a vocally gifted mannequin.

For decades, Dion’s mark on the fashion world had been negligible—at best, she reflected her times, rather than shaped them. Press photos from the release of her first album recall the obnoxiously hairsprayed ’80s. In the early ’90s she experimented with Goth, donning leather skirts and a choker necklace and black cape at the 1993 Grammys. But her flirtation with darkness was brief, and she quickly moved on to the sanitized sex object look that would come to define her for the next ten-plus years: polished and skimpy, but with about as much edge as a bowl of oatmeal. (Remember: the late ’90s was the era where the power-suited Calista Flockhart was considered a sex icon, and the woman with the most sartorial edge was Sex and the City’s Carrie Bradshaw, most notably for pairing a Dior baseball shirt with a girlie tulle skirt.) Dion’s massive cascading brown curls were flattened and lightened to a popular girl shade of honey blonde, and her red­ carpet formula could be summed up by three S’s: sleek, shiny, and skin tight.

The reason for the recent sea change in her approach, as Vogue reported, is the hiring of the celebrity stylist Law Roach. The LA-based “image architect” spent years as a vintage clothing dealer before career transitioning into a stylist. Notables on his clientele roster include Ariana Grande, Orange is the New Black’s Ruby Rose, and Zendaya Coleman, the nineteen-­year-old Disney star. Dion and Roach have been working together for just over a month, but Roach’s art direction of Dion’s wardrobe signals a new direction for her not-exactly-ailing, but not-exactly-exciting career. Speaking to Entertainment Tonight, Dion said, “He brought me out of my closet and now flowers are growing.”

The relationship between celebrities and stylists is standard business practice in this era of the red carpet, the street style blog, the carefully curated social media image. But it does signify a departure for Dion, whose overarching reputation—dating to when she was a teenager—has conveyed unmitigated sincerity. If Celine Dion’s furrowed brows and power warble were previously painful to watch for some—sincere in an age of irony, innocent in a time when most stars are scripting their every move—watching her step out wearing outfits that cost as much as a Caribbean cruise has become a joyful spectator sport. Dion is on the inside now. It’s hard to tell if her Titanic sweater reflected a meta-moment of brilliant self-awareness—given that Dion’s “My Heart Will Go On”, from the soundtrack, is both her bestselling release and her artistic bête noir—or simply Roach’s sly nod to the fashion world—but perhaps it doesn’t even matter if she herself is in on the joke. If the key to staying relevant is reinvention, then her wacky new ensembles have put her back right where she belongs: dead centre in the public eye.

Isabel Slone (@isabelslone) has written for The Hairpin, Hazlitt, and the Globe and Mail.
Irma Kniivila