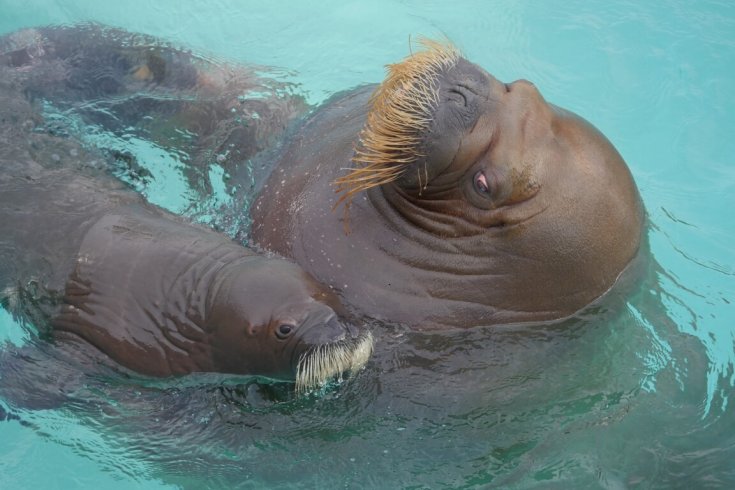 Arnaliaq and her newborn calf take a swim at the Aquarium du Québec.

Grey–brown, wrinkly, and whiskered, the newborn walrus already looks elderly as it waddles around its enclosure at the Aquarium du Québec. The calf’s mother, Arnaliaq, has just given birth to the first ever walrus at a Canadian zoological institution.

It’s an event Jill Marvin, director of animal collections, had been anticipating for months, but never thought she would see in her thirty years working at the Quebec City aquarium. It started last fall, when staff noticed their two female walruses—twelve-year-old Arnaliaq and ten-year old Samka—were gaining a bit of weight. They didn’t think much of it at the time; it’s normal for them to pack on a few pounds as they prepare for winter. Staff saw changes in the male, ten-year-old Boris, as well: he was vocalizing more, being more moody, his appetite swinging. Still, nobody was convinced that the aquarium had not just one, but two, pregnant walruses. “We suspected it, but we didn’t believe it,” Marvin says. “We were denying the signs that were out in front of us.”

Walrus births in captivity are exceptionally rare. Since the 1930s, only nineteen pregnancies have been recorded in North America, and only six calves have survived past one year. Approximately thirty walruses are held in zoos and aquariums around the world.

But Aquarium du Québec’s staff had a hunch that their herd would be growing. They examined saliva and blood samples from Arnaliaq and Samka to measure hormone levels and monitored changes in behaviour, but weren’t getting conclusive results. With their three animals approaching the age of sexual maturity, staff reached out to other institutions for information and found few successes in breeding.

Then, using a waterproof ultrasound machine capable of penetrating Samka’s thick skin and blubber, a technician found a heartbeat. A week later, they confirmed Arnaliaq was also expecting. “And as far as we know, this is the first time that two walruses have been pregnant in the same place,” Marvin says. That’s because it’s notoriously difficult to get walruses in aquariums to mate.

Many animals take cues from nature—temperature or hours of daylight, for example—to begin their breeding season. In aquariums or zoos, animals may experience some natural fluctuations (and some that are mimicked by staff, such as adjusting the enclosure’s water temperature) but don’t experience the same challenges as in the wild. Animals are fed when hungry, and receive medical care when needed.

Walruses mate seasonally. In the wild, males begin rutting in November when large numbers of females begin to gather on the ice. An older, more dominant bull will tusk-fight younger males on the ice for choice of cow. But in captivity, a solitary bull may just never get in the mood, and the male and female cycles never line up. “If you look at the gregarious nature of the species, it’s often a competition among males to get in the good spot to be able to breed with the females,” Marvin says. “So sometimes, the presence of other males can stimulate them starting their cycling period.”

And when a female does become pregnant, the egg delays implantation after it’s fertilized. Walruses in the wild congregate in large herds when pack ice develops in the late fall. While this may be the best time to breed, it’s not the best time to feed. Food can be scarce and hard to access during Northern winters, so the embryo’s growth is temporarily halted for a couple months until the weather warms and energy can be diverted from surviving to gestation. Fifteen-to-sixteen months after conception, calves are born.

Aquariums and zoos are facing scrutiny unlike ever before, with SeaWorld announcing an end to its orca breeding program. For Marvin, institutions have come a long way. “There is a distinct difference with how zoos and aquariums were managed before, to how those that are accredited are managed today,” she says.

Though the current numbers in zoological institutions are few, the history of walruses in captivity is surprisingly long. The first record mentions two—morses, as they were then called—taken aboard a ship in the summer of 1608. The female died aboard, but the male survived the Atlantic crossing, reaching London, England, on August 20. The calf, likely less than a year old, was presented to the king and court, which marvelled at its “strange docilitie and apt to be taught.” It survived just three weeks in captivity. A second calf was taken to London in 1853, and a third in 1867, both dying within days or weeks.

But the fascination with the lumpy, tusked creature endured. In the late nineteenth century, American mammalogist Joel Asaph Allen wondered about the possibility of acquiring a walrus for the Gardens of the London Zoological Society. “To the general public perhaps the most permanently attractive animals exhibited in our Gardens are the Hippopotamuses and the Seals,” he wrote in his 1880 tome, History of North American Pinnipeds. “What then would be the case of a species like the Walrus, wherein the active intelligence of the latter is added to the powerful bulk of the former?”

It’s a question that still lingers today. But the lumbering marine mammal just isn’t as grand as the polar bear, or as adorable as the seal. Henry Wood Elliott, a naturalist painter who in 1872 visited Alaska’s Walrus Island, summed up how many people saw the animals then, and perhaps still see them now. In A Report Upon the Condition of Affairs in the Territory of Alaska (1875), Elliott wrote,

“I was surprised to observe the raw, naked appearance of the hide, a skin covered with a multitude of pustular-looking warts and pimples, without hair or fur, deeply wrinkled, with dark red venous lines, showing out in bold contrast through thick yellowish-brown cuticle, which seemed to be scaling off in places as if with leprosy. They struck my eye at first in a most unpleasant manner, for they looked like bloated, mortifying, shapeless masses of flesh; the clusters of swollen, warty pimples, of a yellow, parboiled flesh-color, over the shoulders and around the neck, suggested unwholesomeness forcibility.”

For Marvin, however, there’s more to walruses than their unwholesome appearance. Of the 400,000 visitors who walk through the doors of the Aquarium du Québec, many leave with a new respect for the rotund pinniped. “There’s a lot of people who come who know nothing about a walrus, they’ve come here to see something else. And then they come upon the walruses and realize how much character these animals have,” Marvin says. “When people hear Boris make his vocalization”—a bark-growl-moan-snort that sounds like Star Wars’ Chewbacca—“they had no idea that animal was so cool.”

Walruses may have character, but they’re also temperamental, and the aquarium’s new calf is facing a host of challenges. If need be—if Arnaliaq doesn’t produce enough milk or doesn’t accept her baby—staff is prepared. They have imported enough formula, specifically made with the appropriate fat and protein content for walruses, to last for months. For now, the mother and baby will remain in its indoor enclosure, until staff can determine the calf’s sex and weight. Staff will also keep a keen eye on Samka, who is due in June, and will likely increase their herd to five—around one sixth of the global population in aquariums. Boris will remain separated from the females, which is consistent with what happens in the wild. (In the beginning of March, he was still trying to breed with the two pregnant females.)

These first two weeks will be critical for the calf as it relies on its mom to feed, keep warm, and swim. Staff at the aquarium will be conducting three scientific studies on their walruses, to gather as much information about the species’ pregnancy and birth. But most importantly, they will try to keep the newborn healthy to make sure it survives beyond one year. In the wild, calves sometimes die during a stampede to the water, but in captivity pneumonia is a more likely threat. “We’ve tried to put a plan in place that covers as much as we can think of,” Marvin says. “But sometimes nature happens.”

What Will Be the Tipping Point of the Climate Crisis?

How Do You Kill an Invasive Species? Bring in a Bigger, Meaner Species to Eat It

Therapy for the End of the World