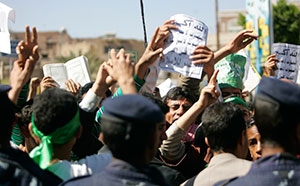 Getting to her office at San’a University, where she works as a librarian, has never been easy for my sister Raja’a—one of my eight siblings and, at last count, fourteen nephews and nieces who live in San’a, Yemen. This divorced single mother of a twenty-three-year-old daily navigates the city’s traffic light–free streets, crowded dababs (minibuses), and airport-style checkpoints at the university gates. Now that throngs of youths have declared the campus and its surroundings the nerve centre of their revolution, her commute is difficult and dangerous. “I used a roundabout, back-of-back-streets path,” she told me on the phone during one of our now weekly checkup calls. After fifty-two protesters were killed by alleged pro-government snipers outside the university on March 18, she took vacation time to wait out the revolution at home. It’s hard to tell how long that will take—or, at the time I write this, whether what started as a peaceful revolution will turn into a full-fledged civil war.

As I follow news of the showdown between protesters and government forces from the comfort of my Toronto condo, I understand, even sympathize with, the anger that fuels it. Since he seized power in 1978 of what was then the Yemen Arab Republic in the north, President Ali Abdullah Saleh has followed the Blueprint for Arab Dictators to the letter. He defused pro-democracy sentiments by presiding over a largely symbolic parliamentary system, while cracking down on political dissent and placing his family members in key government positions. In early 1987, I worked for a few months as a translator for Saleh’s brother, Mohammed, who ran the internal security apparatus. Six days a week, I translated and responded to private business letters and proposals from European investors—and the odd arms dealer.

In November 2004, Macedonian public television aired the first episode of its ambitious polyglot reality series, To Sam Ja (That’s Me), in which real people from all six Balkan republics attempt to live harmoniously under one roof. According to the show’s producers, To Sam Ja imagines a world where “young people from the… former Yugoslavia can interact and socialize,” despite a recent history of ethnic warfare. Critics, however, identified a more controversial agenda: yearning for a Yugoslavia united under socialist dictator Josip Broz Tito—a common but divisive sentiment, given the violence and privation that accompanied the region’s shaky transition to free-market liberalism. Accusations of “Yugo-nostalgia” were confirmed when Tito iconography, including portraits and the emblematic Yugoslav star, began cropping up in key scenes. Following a public outcry, the socialist paraphernalia was quickly discarded. The show remained popular, however, particularly among viewers old enough to remember the Tito era.

The Saleh clan ran the country like a private venture fund. International aid money intended to better the lives of the country’s now 24.3 million citizens found its way into the president’s inner circle, while the infrastructure in San’a—let alone smaller cities and villages—crumbled. Despite some modest oil revenues, inflation and unemployment made daily life almost impossible in a country where over 45 percent of the population survives on less than $2 a day.

Yemenis have long been the butt of jokes in the Arab world (the region’s Newfies, as it were), but they’ve adapted smartly to water shortages and daily blackouts. My sister Hoda—an executive assistant with nearly thirty years’ experience, who late last year secured a low-paying job after eighteen months of unemployment—spends much of her spare time negotiating lower water rates with the private sellers who drive up and down the streets of San’a with water tanks. Last year, my brother Khairy, a soccer fanatic and father of four, invested in his second power generator, just in time for the 2010 World Cup games.

But despite the protesters’ steadfast demands, there’s no evidence that Saleh’s immediate ouster will create the millions of jobs needed to keep Yemeni youth off the streets, or make taking a long shower in San’a a possibility. In fact, I feel better about Yemen’s shot at a semblance of stability with Saleh at the helm. I realize that puts me on the wrong side of history—such is the seductive power of the pro-revolutionary narrative—but without him, Yemen is merely fast-forwarding its way into chaos. Western observers, cheering on the country’s revolution after supporting those in Tunisia and Egypt, need to dial down the liberal guilt and consider the risks of a post-Saleh Yemen.

Saleh’s greatest achievement to date is keeping this fractured country from descending into a second outright civil war. (The first on his shift was in 1994, between the pro-capitalism North and the Marxist South, united in a shotgun wedding in 1990 to avoid fighting over revenues from oil and gas discoveries.) Over the past two years, he battled an armed rebellion by Shia tribesmen (the Houthis) in the northern terrains, while simultaneously fighting off a secessionist movement in the South, led by socialist and Marxist holdovers from the pre-unification regime. Through an elaborate system of patronage and bribery, he managed—until recent events, at least—to appease regional tribal leaders whenever they demanded autonomy from the state. Although he was not above pitting one tribe against another, he could ultimately distract each from antagonizing the state. These are heroic acts, even if Saleh can’t possibly be called a hero. Without his brand of political survivalism—and, grudgingly, savvy—Yemen would have gone the way of Afghanistan or Somalia two decades ago.

His greatest performance to date, however, has been as an anti-terrorism watchdog for the United States. Yemen has served as a base for radical Islamists since the 1980s, when Saleh himself admitted jihadis who fought the Soviets in Afghanistan. Their influence in the country culminated with the establishment of Al Qaeda in the Arabian Peninsula, the group that made headlines when, on Christmas Day 2009, a Yemeni-trained Nigerian student stitched explosives to his underwear and attempted to blow up an American passenger jet. Ever the opportunist, Saleh took advantage of this new threat (to the West, largely) by shaking down the US administration for anti-terrorism money, to the tune of more than $300 million so far.

I can’t find compelling evidence that the war against al Qaeda tops Saleh’s priority list, even if he has done a credible job of making it appear so. It’s extremely unlikely, though, that Islah—the main religious opposition party and a likely political force should Saleh’s regime topple—will be as motivated to blow up al Qaeda’s base in the country. Both Shia and Sunni tribes have long offered rebels and radicals amnesty from the state. Major General Ali Mohsen, the highest-ranking army officer to support the protesters and add his loyal forces to their cause, is also seen as sympathetic to radical Islamists.

Like many middle-class Yemenis, my brothers and sisters feel politically and economically disenfranchised and have sought refuge in Islamic teachings. But I know that even they feel safer living under a president who, duplicitous as he is, remains vigilant—particularly in a country where as much as 60 percent of the population is armed. And we’re not just talking handguns and AK-47s here. As the New York Times’ Robert F. Worth reported last year, rocket-propelled grenade launchers are not uncommon as private property in Yemen. Perhaps my siblings have learned to love the devil they know; perhaps they are just afraid for their own lives and their children’s. Who could blame them? It’s easy to justify bloodshed as the price of revolution when the blood isn’t your own.

Kamal Al-Solaylee (@KamalAlSolaylee) is the author of Intolerable: A Memoir of Extremes, which won the 2013 Toronto Book Award. His second book, Brown: What Being Brown in the World Today Means (to Everyone) won the Shaughnessy Cohen Prize for Political Writing. He is Director of the School of Journalism, Writing, and Media at the University of British Columbia. 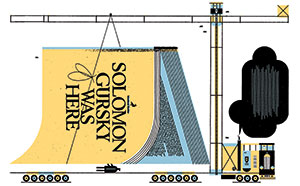