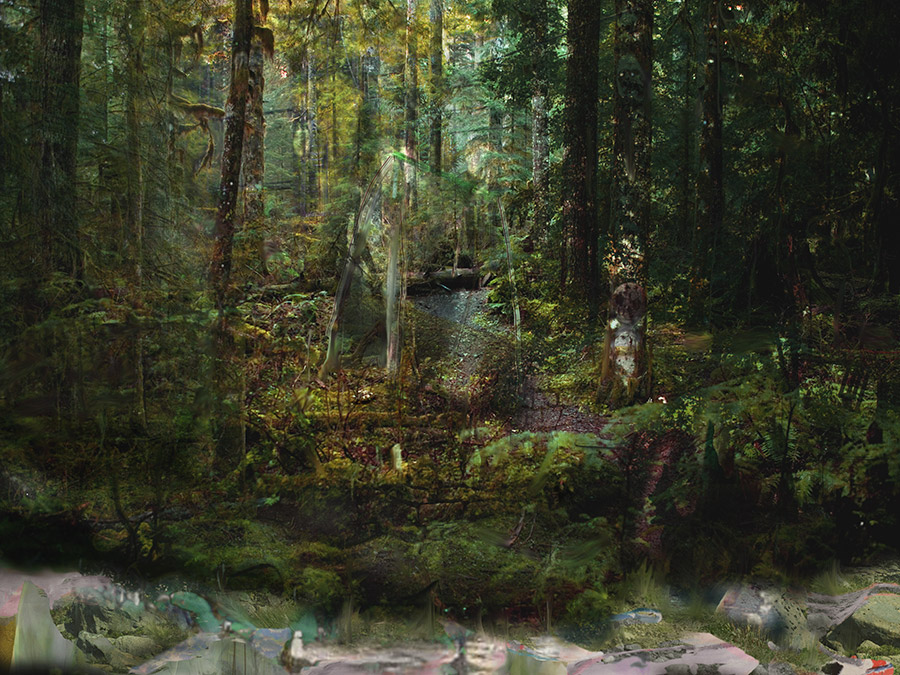 Peter killed the engine in the middle of the lake, the boat rocking up and down on its own waves. They might just drift for a while, maybe lie on the swim platform and smoulder in the sun. He could feel the skin tightening across the bridge of his nose already, on his chest in the open vee of his shirt. He had sunscreen at the cottage but he hated putting it on. Sarah didn’t need it. Or she didn’t used to—lately she was more sensitive, little bits of her flaking off here and there. She was huddled on the bench seat behind Peter, wrapped in a towel even though she hadn’t been in the lake yet.

“Why are we stopping?” she said, her face turned toward the shore, the way they had come.

“I thought we could just drift.” He went and curled around her and her skin was warm where it was exposed. It was good to be behind her, where she couldn’t see him. They had fought the night before and Peter was supposed to be contrite, but he had a hard time with it on the water. The smell was too heady. He should have stayed on shore, where it was easier to be sorry.

“Are you feeling okay?” he said.

“Do you want to lie on the swim platform?”

“We’ve been out for a while already.”

“Let’s take the long way back.” Then she drew her knees up, boxing him out.

The wheel was warm in his hands when he turned sharply into the shore opposite their own, preparing to follow it in a slow perimeter. They liked to look at the other cottages, critiquing paint choices or coveting flower boxes. It wasn’t what Peter thought he would enjoy doing, but there was a ritual to it, an easy bridge Sarah could walk back to him.

As he straightened out of the turn, Sarah shouted and pointed at something in the water. Cursing, Peter jerked the wheel so hard the boat jumped its own wake, slamming down with a jolt that smashed his lower teeth against the uppers. He felt it in the corners of his eyes.

He stopped and turned to see what the thing in the water was. He was still shielding his eyes and squinting when Sarah threw off her towels and dove in. That the thing was a person only registered when Sarah had reached it and begun expertly towing the body in a crosswise rescue pull. Her whip kick was a thing of beauty.

She got to the platform and tried to roll the woman onto it. Peter was slow, moving too slowly, he could hardly move at all, but finally he got there, grabbed an arm and a leg, God she was heavy, she didn’t look that heavy, and he recognized her and he pulled harder all at once and she flopped onto the boat and he felt a ping in his back like something small and wiry had stretched and snapped. It hurt so badly he moaned with his mouth open and couldn’t close it.

Sarah had climbed aboard and was staring. She clearly recognized the young woman, too, although the unconscious face was paler than usual, with an obviously broken nose and hair that had been cut short in seemingly random places, as if someone had grabbed fistfuls and hacked them off. The long bits were pasted to her skin and reached past her shoulders. She was wearing a black dress.

Sarah put her face in her hands and rubbed it like she was washing. Then she shook her head and began arranging the woman, flattening her body and tipping her head back. She did all this carefully, and then she pinched the woman’s broken nose very gently and covered her mouth with her own. The woman’s cheeks bloomed outward. Sarah repeated the process three times, then switched to chest compressions. Peter was standing up with both hands pressed to his back. After several breath cycles, the woman began to cough and then retched, vomit covering her chin and neck. Sarah put a hand under her back and propped her up. She put her fingers in the woman’s mouth and scooped out what vomit remained. She pulled the long pieces of the woman’s hair off her chest and put it behind her back, then rolled her onto her side, facing the water. She pooled lake water in one hand, her fingers held tightly together, and poured it on the woman’s face. The woman was breathing loudly. Sarah climbed onto the bench seat and covered herself with towels again. When Peter didn’t move, she said, “She needs a doctor. We have to get home.”

Grace O’Connell was a finalist for the RBC Bronwen Wallace Prize for Emerging Writers in 2008. She published her first novel, Magnified World, in the spring of 2012.
Alex Fischer

Alex Fischer presented his second solo exhibition at the O’Born Contemporary gallery in Toronto in 2012.