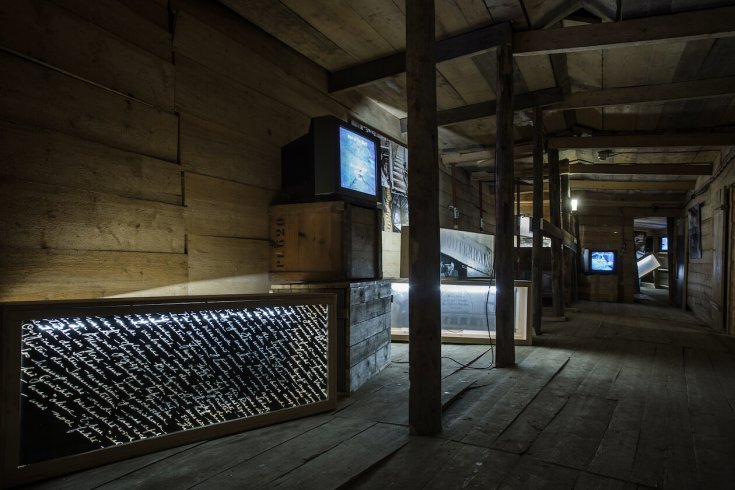 In the early 1990s, Canadian artist Vera Frenkel, a pioneer in multimedia arts with an international following, created Body Missing. The six-part video installation and accompanying web project explore the tangled and horrific history of Nazi art theft. After making its debut at the Offenes Kulturhaus in Linz, Austria in 1994, Body Missing has since been exhibited around the world.

Like all of Frenkel’s major installations, Body Missing asks the viewer to consider the collisions of culture and bureaucracy, of art and its opposite: control. At the same time, it offers no immediate, reliable lessons. Composed of video, soundtracks, and voice-overs, as well as large photographs housed in light boxes, Body Missing is true Frenkel—open and questioning, polyphonic and, at times, disorienting but also rigorous and document-driven.

Frenkel’s works—and Body Missing is an excellent example—are devised to foster uncertain, open-ended responses. As the late John Bentley Mays wrote of the 2010 exhibition Vera Frenkel: Cartographie d’une pratique/Mapping a Practice, each finished piece has the “field of strong gravitational energies around it”—a space where things happened and continue to happen simultaneously, even after it is all made public. It comes into existence, he added, “Bit by bit, over time.”

Yet for all that Frenkel’s work is designed to create ongoing engagement, few could have imagined that the work would be on display where it is today.

When the Nazi empire began to crumble, the thieves and murderers who ran the Third Reich desperately searched for hiding holes—for themselves and for the masses of art and other treasures they had stolen. Abandoned mines proved to be excellent hiding spots. Obscure, easily sealed off, and possessed of consistent (or at least predictable) atmospheric conditions, mines are perfect, if dusty, homes for stashed loot.

One such site is an abandoned salt mine in Altaussee, Austria (300 kilometres southwest of Vienna), which was once filled with more than seven thousand stolen works of art—they had been intended for Hitler’s personal museum (Führermuseum). Last month, Frenkel was there to install the latest, and perhaps most visceral, version of Body Missing. Her layered dissection of one of history’s greatest thefts, it seems, has come full circle.

Frenkel stresses that long study—both on fascism and the times we live in—drove her to accept the invitation to mount Body Missing in the salt mine. For her, Body Missing had “already touched on a palimpsest of issues of conscience.” The salt mine resonated with her as a site of a deep, unresolvable mysteries. She felt she couldn’t refuse the invitation. “That it now seems to fit a time of regression in which racism of various kinds is not only permitted but encouraged by example,” she adds, “is deeply sad.”

Putting an art show in an old salt mine comes with some challenges. The mine is only partly accessible, and a few days before installation of the fragile light boxes and video monitors was to begin, some of the rooms set aside for the show were found to be structurally unsound. The six videos require electricity, of course, and the monitors and players need to be on a stable surface. And they are heavy. Furthermore, the installation had to be set up to play continuously, day and night—the salt and humidity can only be kept at bay by keeping the machines running.

Luckily, Frenkel does not scare easy—not that she wouldn’t have had her reasons to be worried. Several years ago, Frenkel was injured in a train accident and now uses a walker to get about. The walker is about the same size as the carts that were used to haul salt (and later, Nazi-pilfered art) around the mine, so Frenkel found herself constantly dodging the deep cart tracks. And the mine is a spooky place. “At one point, we had to wait in an alcove while the tour of white-clad visitors came by, and I heard a mind-blowing shriek of fear,” she says. “Apparently, catching sight of anyone else in the mine was so startling that one of the women nearly fell in shock.”

From Vera Frenkel’s Facebook posts during installation of Body Missing:

Sept 7, 2017
There’s no Wi-Fi in the salt mine, and mountain weather disrupts it everywhere else. (This is my third attempt to post since we arrived in Altaussee….). I’ll try to send a couple of pix before the connection is lost again: the tunnel near the entrance, then further in towards the 700-metre mark, and what we found there—(as it looks now that we’ve cleared the debris), including numbered shelves where the stolen artworks were stored. Old bombs; dud dynamite. Yesterday part of the roof was broken in over one of the spaces and workmen were assigned to keep the mountain from caving in. Electricians arrived this morning….The walls in the tunnel are solid salt, retaining the water striations of the ocean that was the source. Hope this note gets transmitted this time…

Local viewers who attended the opening and chatted with Frenkel, an audience that only last year was faced with the possibility of Austria electing a far-right presidential candidate, responded to the exhibition in ways Frenkel finds illuminating. She heard the words heickele geschichte (sensitive matter) often. At one meeting with local curators, Frenkel says, the conversation turned to detailed descriptions of their fathers’ conscription into the army as young teenagers. They talked about the toll the war had taken on them and on their families. “I’ve no doubt that World War II has cast a long shadow of grief, pain and shame,” says Frenkel, “but this was the first time…where display or acquisition of my work was being discussed that I felt I was being addressed as representing the enemy.”

Sensitive matter is putting it mildly. Over the years I have lived in Germany (and have visited many former Nazi-occupied or collaborative countries), I’ve noticed that Europeans now living in these places generally employ one of two pat responses: it was a bad time, but we don’t talk too much about it because we are ashamed, which is what I most often hear from anybody my age (fifty-two) or older; or, it was a bad time, but I refuse to talk about it because I bear none of the collective guilt, which I often hear from younger people.

Art being made today, especially the rigorous and exploratory work by artists such as Frenkel, needs to feel vital again—and it does. Body Missing does not lend itself to simple responses—largely because it does not ask its viewers to accept blame nor does it offer them any forgiveness. It asks viewers to look, to watch, to listen. It is a meditative work in a time of shouting.

RM Vaughan is a Canadian writer and video artist.