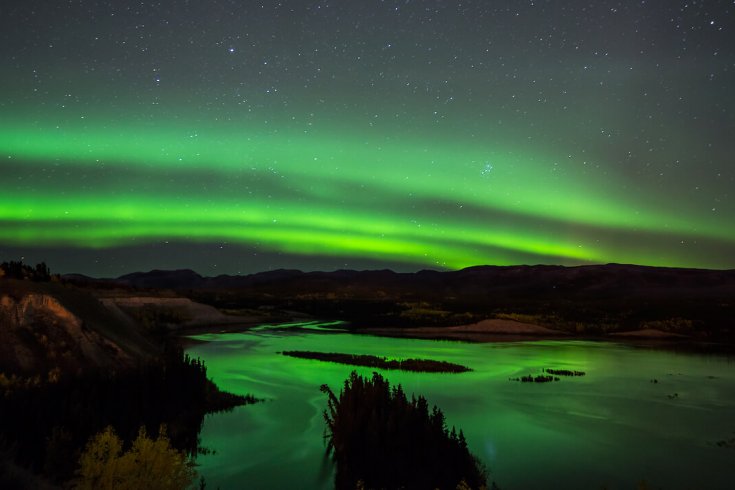 The Clinton–Trump showdown wasn’t the only recent election. Last Monday, residents of the Yukon went to the polls as well, to elect a new territorial government. The incumbent Yukon Party, the territory’s approximate equivalent of the federal Conservatives, was seeking a fourth consecutive mandate, while the NDP, official opposition since 2011, and the Liberals, reduced to just one seat five years ago, were aiming to make a change. The hot-button issues: fracking, the proposed federal carbon tax, and the territorial government’s relationships with First Nations.

Change is what we got: The Yukon Liberals, under leader Sandy Silver of Dawson City, rolled to a comeback majority.

There are roughly 23,000 eligible voters in Canada’s smallest northern territory, spread out across nineteen ridings. Eleven of those are in Whitehorse, the capital; the rest represent the territory’s scattered communities where voters are measured not in thousands or even hundreds but in dozens. Though the Yukon Party has held power for fourteen years, this isn’t a consistently conservative jurisdiction: The NDP has formed governments in the past (as have the Liberals, once), and Audrey McLaughlin, former leader of the federal NDP, was Yukon’s MP during her time in Ottawa. The current MP is Larry Bagnell, a Liberal who served from 2000 to 2011, lost his seat to a Conservative in a very close race, and then regained it in a rematch last year.

Maybe the election result means that mining companies will stay away, gambling their exploration dollars elsewhere.

This year, any of the three major parties could have conceivably formed government. (The Yukon Greens, meanwhile, were seeking their first seat in the legislature.) Heading into the vote, no one was sure what to expect: local journalists put together an election pool, and the resulting predictions included every possible configuration. There were hints, definitely, that the Liberals had the momentum, but Yukon’s voter numbers are generally regarded as too tiny for reliable polling. It was, theoretically, anybody’s game.

The campaign issues, as is often in the case here, revolved around land use, resource extraction, and the question of conservation. When Premier Darrell Pasloski was elected in 2011, the Yukon was in the midst of a second Gold Rush: the economy was booming, mineral exploration dollars flowed into the territory from down south, and several promising properties were being developed: gold, copper, and more. In the years since, mineral prices have slumped, our operating mines have all closed or cut back substantially on their production, prospective mines have been delayed or abandoned, and exploration has ground to a near halt. At the same time, several Yukon First Nations have sued the government over resource development, consultation, and related issues—and more often than not, they won.

Without much good economic news to campaign on, the Yukon Party’s loudest promise was a vow to resist the Trudeau government’s carbon tax—to somehow negotiate or fight their way to an exemption for the territory. Pasloski’s contention was that the tax would make Yukon cost of living—already higher than in the provinces—even higher, and that there were other, better ways to reduce greenhouse gas emissions. The Liberals and the NDP, meanwhile, duelled over the difference between a “moratorium” on fracking in the territory—the Liberal promise—versus the full ban promised by the NDP. Liberal leader Silver vowed to meet with every First Nation government within thirty days of being elected as premier; the NDP also emphasized reconciliation with First Nations, and (among other things) promised to raise the territorial minimum wage from $11 to $15 per hour.

The campaign didn’t have the drama of our most recent federal election—no handcuffs or citizens’ arrests. But the Mounties did get called in to investigate a Liberal candidate’s use of proxy ballots, intended for residents who will be out of the territory during the election, to collect the votes of homeless Yukoners. (The investigation is ongoing.) And the Yukon Party weathered accusations of its volunteers driving intoxicated voters to the advance polls. (They were cleared of wrongdoing by Elections Yukon.)

Among politics-watchers, the suspicion was that many Yukoners were tired of the government, and that change was likely. Still, people wondered if the Liberals and the NDP would split the center-left vote and allow Premier Pasloski to hang on, maybe with a minority government. As the votes were counted and the results announced Monday night, it became clear that voters had dodged that scenario—mostly at the expense of the NDP. The party was reduced from six seats to two. Meanwhile, the Yukon Party was cut in half, dropping from twelve seats to six to become the new official opposition. The premier finished a distant third in his riding, and resigned as leader of the Yukon Party in his concession speech.

So what happened? The NDP says that, like their federal counterparts in 2015, they bore the brunt of strategic voting and a “just get the Yukon Party out” mentality that swung towards the Liberals—a shiny new unknown. The result is a majority government made up of ten rookie MLAs and a new premier who has just one term as a lone opposition MLA under his belt. No one is quite sure what to expect.

Nationally, this means that the North is now solid red: All three territorial MPs, plus the Yukon premier, are Liberals. (The Northwest Territories and Nunavut territorial legislatures do not use a party system.) It means that the Yukon’s wilderness, and its mineral resources, are now in the hands of a party that is, at the least, less open to development than its predecessor. Maybe that means mining companies will stay away, gambling their exploration dollars elsewhere; maybe the wilderness, adventure, and eco-tourism industries will flourish, instead. There will be no drawn-out fight over a federal carbon tax; there will, perhaps, be fewer lawsuits from First Nations who feel unheard in the debate over land and resource management. Given that the Liberals won a majority government with just 39.4 percent of the popular vote, while the NDP was decimated despite receiving 26.4 percent, there may be a renewed debate over electoral reform. Given Justin Trudeau’s campaign promises, that may be a difficult debate for Sandy Silver to avoid.

The election ended in typical Yukon style: When the newly elected premier, at home in Dawson City, tried to Facetime with his elated supporters in Whitehorse, our limited northern bandwidth wasn’t up to the task, and the call failed. “Liberals for fibre optics!” someone in the crowd shouted. That’s one thing all Yukoners can agree on.