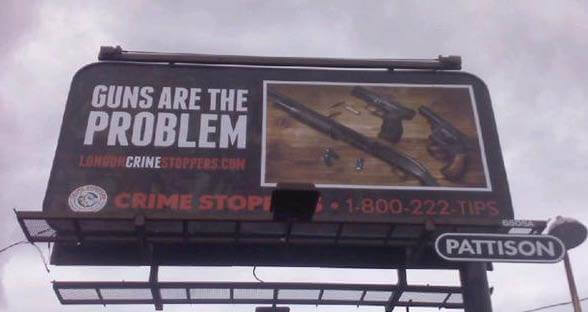 But this iteration is different. This time, the careless remark was not directed at women, or disabled persons, or persons of colour. This time, the victim of insensitivity and slander is a gun.

On September 4, London-Elgin-Middlesex Crime Stoppers posted to their Facebook page a photo of a billboard the group had erected in London and Strathroy, Ontario: a photo of two handguns and a shotgun, accompanied by the slogan, “GUNS ARE THE PROBLEM.” Their intentions were pure: “Please note our new campaign to try and get illegal guns off the streets.” But the damage was done: four insensitive words had reached millions of guns, coast to coast, and gravely hurt their feelings.

As the US National Rifle Association reminds us, guns can’t defend themselves, but in a heart-warming display of altruism on behalf of their defenseless charges, gun owners were quick to intercede. Comments flooded the Crime Stoppers Facebook page, threatening class-action lawsuits, promising never to support Crime Stoppers again, and demanding retractions.

The Canadian Coalition for Firearms Rights (CCFR) stepped in with an open letter. “I find the message ignorant (at the least),” wrote CCFR president Rod Giltaca. The National Firearms Association (NFA) assured its supporters that the organization was on the case. Even the Ontario Federation of Anglers and Hunters, a group that prefers to work quietly in the background, issued a press release, calling the billboards “inaccurate, misinformed, offensive, and . . . disappointing.”

Canada’s media, eager as ever to comfort the afflicted, also sided with the victims of Crime Stoppers’ oppression—or at least, that strange, strident faction represented by Ezra Levant’s Rebel Media did. “Those guns on that billboard aren’t actually illegal,” declared a willfully obtuse Andrew Lawton. Was Crime Stoppers, now outed as a “leftist organization,” trying to manipulate Canadians into calling police on ordinary, law-abiding hunters and target shooters?

It’s easy to make fun, but behind the sputtering indignation lie real grievances. You can’t manufacture outrage without raw materials. Just as the rise of Donald Trump warns us that many frustrated Americans feel essentially disenfranchised, outrage over a few well-meaning billboards in a couple of southwestern Ontario cities stands as a warning to Minister of Public Safety Ralph Goodale as he prepares to revise our gun control laws: things are going to get messy.

“People are angry,” explains Giltaca, “and with good reason.” NFA president Sheldon Clare puts it succinctly: “Gun owners feel attacked.” To own a gun in Canada is to feel besieged, an outcast, to know in your bones that with each successive Liberal government you will find yourself yet more restricted, and that any complaint you raise will be written off as the whinging of a petulant child. To a sizeable proportion of Canadian gun owners, the Liberal Party is the enemy, and there is a persistent belief that the Liberals’ end game is wholesale confiscation.

This is not entirely paranoia, untrue though it may be. It is a mess the Liberals made twenty years ago, in forgetting that true democracy proceeds by compromise and not by the winner-takes-all game of first-past-the-post electoral politics. We are still bobbing in the wake of Allan Rock’s contentious Firearms Act, a bill that in its original form allowed police to search any home without a warrant if they believed a firearm was present—even if the firearm was legally owned. The party leadership has changed, but the sense of persecution persists.

Neither is Canada’s small and fractured gun lobby willing to let go: persecution is the spring whence membership flows. Indeed, Canada would have no gun lobby were it not for the Liberal Party, whose 1970s gun control efforts midwifed the NFA.

The NFA formed in 1978, and immediately distinguished itself by publishing a government memo revealing a secret plan to confiscate all guns in Canada—which turned out to be a fake. But the group struggled to attract members, and folded in 1980. The group was born again in 1984, and in the 1990s gained members thanks to Kim Campbell’s and Allan Rock’s gun control bills, but became all but defunct following the death of president David Tomlinson in 2007.

In 2010 the NFA rose from its own cold ashes again, this time under Sheldon Clare. The Canadian Shooting Sports Association (CSSA) had become the country’s leading gun lobby, and enjoyed a direct line to the Harper government via then-MP Garry Breitkreuz (who now serves on the CSSA’s board of directors). The Conservatives were in power, and the pro-gun side was winning. The NFA needed an angle.

To set itself apart from the CSSA’s quiet lobbying, the NFA adopted the slogan “No Compromise,” and set out to be as brash and polarizing as it possibly could. The group captured public attention by issuing a press release declaring Justin Bourque’s Moncton shooting spree proved all gun laws should be abolished, before Bourque had even been captured, and later, by getting Justice Minister Peter MacKay to don one of its “No Compromise” AR-15 T-shirts for a photo.

The confrontational style worked. Membership quickly grew, peaking at 73,000, and the group hired a full time executive vice president—Shawn Bevins—at $70,000 a year. But some members were unhappy with Clare’s leadership. An internal power struggle exploded in February 2015, culminating in two lawsuits—one by Bevins, who had been let go, and one by a dissident faction among the board of directors. Many members simply walked away. Membership shrank to 19,000.

The NFA’s meltdown gave rise to the CCFR, which set out to differentiate itself from the NFA and the CSSA by focusing on public outreach. Most Canadians are loosely in favour of gun control, but don’t know (or care to know) the details of our gun laws. The CCFR has set out to rectify that situation, convinced that if Canadians only knew our laws, they would see not only how ineffective they are, but how futile gun control is in general.

Giltaca has become the public face of the CCFR. He’s immediately likeable, projecting a level-headed, reasonable image as he calmly makes his case—the polar opposite of the stereotypical gun nut. His group supports licensing gun owners, and mandatory firearms safety training. But the CCFR also supports ideas that will prove a harder sell: abolishing handgun registration, allowing guns to be kept at the ready for home defence, and requiring the government to issue concealed handgun licenses to anyone who qualifies.

For the NFA and the CCFR, it wasn’t enough simply to respond to the billboards. It was essential to be seen to respond—to respond in a public way that would advertise that the group was fighting actively on behalf of gun owners. To the militant gun owner, every point counts, and every slight must be answered.

Given how entrenched our opinions are on guns, Crime Stoppers’ admittedly clumsy slogan is unlikely to change anyone’s mind—a point that Giltaca concedes. But, he adds, “it could affirm their bias.” Notwithstanding Andrew Lawton’s fever dreams of SWAT teams gunning down hunters, it was not the potential effect of the billboards that mattered. It was simply that the billboards existed.

“I cringed,” says Clare, of his first reaction. “I thought, ‘Oh, no. I’m not gonna check my email.’” As expected, it was filled with angry demands for action. Clare called Al Gibson, who serves on the London-Elgin-Middlesex Crime Stoppers board. Taken aback by the controversy—and by attacks on the board’s integrity—Crime Stoppers announced on September 15 that they would cover up the billboards.

“We reasonably believed that people would get the connection with Crime Stoppers,” the board explained, in a written statement. “We have never and would never target law-abiding citizens, including licensed firearms owners. Why would we?”

Sheldon Clare and the NFA struck a conciliatory note. “Having been there,” said Clare, whose own organization’s infighting was recently settled before Alberta’s Court of Queen’s Bench, “I’m very attuned to how everyone’s an expert on Facebook. People forget that these organizations are staffed by volunteers working off the sides of their desks. I’m happy to cut them some slack.”

But it wasn’t enough for some. The board’s apology was insufficiently abject. The Internet mob still howls with the anger of impotence. To the powerless, to the disenfranchised, anger is difficult to let go. Anger is all they’ve got.

A. J. Somerset (@ajsomerset) is the author of Arms: The Culture and Credo of the Gun.